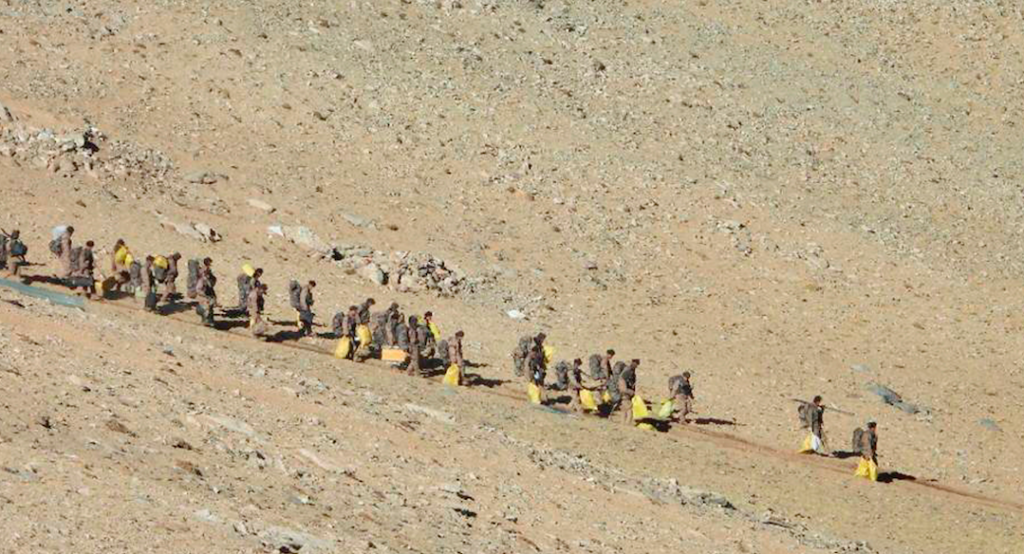 According to media reports, China is building this bridge on the northern shore of Pangong Tso Lake in Finger Eight to 20 km east. Congress targeted Prime Minister Narendra Modi regarding this and said that whether China instigates, builds bridges, establishes military villages… but Modi ji is silent! Is this the policy of showing red eyes to China?

Indian and Chinese soldiers and their tanks retreating from the Pangong Lake area in eastern Ladakh. (File photo: PTI)

New Delhi: With continued infrastructure construction along the Line of Actual Control (LAC) in eastern Ladakh, China is building a new bridge over the Pangong Tso lake, which will facilitate rapid deployment of troops between the northern and southern banks of the lake. .

According to the Indian Express report, sources say that this bridge is being constructed on the northern bank of the lake from Finger 8 to 20 km east.

India says that Finger Eight actually shows the LAC. The bridge is to the east of Khurnak Fort in Rutog County, where the PLA’s frontier bases are located.

Since the start of the military standoff between India and China in May 2020, the two countries have not only worked to improve the existing infrastructure but also built new roads, bridges and landing strips across the frontier.

Pangong Tso Lake is 135 km long, of which more than two-thirds is under Chinese control.

Historically part of India, Khornak Fort has been under Chinese control since 1958. The LAC is to the west of Khurnak Fort, where India claims finger eight while China claims finger four.

The northern and southern banks of the lake are one of the many points that emerged after the standoff between the two countries began.

The area had seen massive mobilization before India and China withdrew troops from the north and south in February 2021, and both sides had deployed tanks at some places, barely a few hundred meters away.

It is known that by the end of August 2020, Indian soldiers had reached the peak of Kailash Range on the southern bank of Pangong Tso Lake.

Indian soldiers were stationed on the peaks there including Magar Hill, Gurung Hill, Rejang La, Rechin La and thus the soldiers had made a strategic advance.

Indian soldiers were stationed over Chinese troops in the Finger areas on the northern bank of the lake. During this, there was firing from both sides for the first time in nearly four decades.

Soldiers of both the countries remained on these peaks even in the cold winter, due to which China was forced to negotiate the withdrawal. After this, both the countries had agreed to withdraw the troops from the northern bank of the lake.

Sources say that the new police being made by China will help in rapidly deploying its troops in this area. Hopefully a repeat of what happened in August 2020 can be avoided.

Former Congress president Rahul Gandhi on Tuesday hit out at Prime Minister Narendra Modi over reports of China building this bridge and said that the echo of his ‘silence’ is very loud.

Quoting a news, he tweeted, ‘The echo of the silence of the Prime Minister is very loud. Our land, our people and our borders deserve much better than this.

The news cited by the Congress leader claimed that China is building a bridge very near the LAC that will connect the northern shore of the lake with the southern shore.

Congress General Secretary Randeep Surjewala also targeted the government and the Prime Minister over a news related to the construction of the bridge.

He tweeted, ‘Whether China provokes, builds bridges over Pangong So, captures Y Junction in Depsang, captures Gogra Hot Springs, establishes military villages in Arunachal Pradesh, builds new ones in Doklam area… but Modi ji is silent! Is this the policy of showing red eyes to China?’

Protesters are dodging the police in China, dating app is being used tremendously