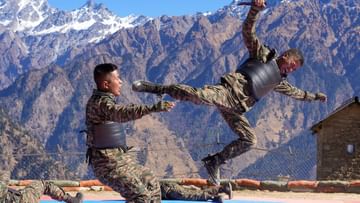 China opposed India’s war exercise with the US in Uttarakhand, saying that joint military exercises between India and the US near the Sino-India Line of Actual Control were against the spirit of the agreement between China and India in 1993 and 1996. violates.

India’s joint war exercise with US near LAC in Auli

India in Auli, Uttarakhand line of actual control (LAC) with the US joint warfare exercise But rejecting China’s objections outright, said on Thursday that it cannot veto any third country on such issues. China Taking a dig, MEA spokesperson Arindam Bagchi told reporters that the joint war exercise with the US in Auli has nothing to do with the 1993 and 1996 agreements with China.

Bagchi said that since the Chinese side has raised this issue, I would underline that China should think for itself about the violations committed by it in the 1993 and 1996 agreements. He said that India cannot provide veto to any third party with whom India conducts war exercises. India has a relationship with America and no one can veto it.

It is to be known that China opposed India’s war exercise with the US in Uttarakhand, saying that the joint military exercises between India and the US near the Line of Actual Control (LAC) between China and India were in violation of the agreement between China and India in 1993 and 1996. violates the spirit of Asked about a news report about China’s warning to the US not to interfere in relations with India, he said what can he say on this as he was not threatened.

These exercises going on with US in Auli have nothing to do with the 1993 & 1996 agreements. Chinese side needs to reflect & think about its own breach of these agreements. India exercises with whomsoever it chooses & it doesn’t give a veto to third countries on this issue: MEA spox pic.twitter.com/0f102TANpy

Significantly, China has warned American officials not to interfere in its relations with India. The Pentagon, the headquarters of the US Defense Department, has given this information in a report presented in the Congress (Parliament). The Pentagon has said that during the year 2021, the PLA will maintain the deployment of military forces along a section of the India-China border and also continue to build infrastructure along the LAC. The report said that there has been minimal progress in talks between India and China to resolve the standoff, as both sides oppose moving from their respective positions on the border.

In response to a question about the imposition of restrictions and lockdown regarding COVID in China, Bagchi said that he cannot comment on any country’s strategy to deal with COVID. He said that he hopes that the entire humanity will recover from COVID.

Chinese balloon is high tech, US expert said – it will not be easy to shoot down