Upcoming Smartphones: These 3 powerful mobiles will be launched in December, will be packed with these features 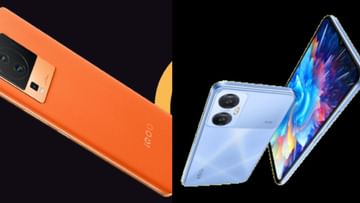 Upcoming Mobiles in December: If you also have a plan to buy a new smartphone, then wait a bit, next week big brands like Infinix to iQoo are going to launch their new smartphones.

Upcoming Mobiles in December: These cool smartphones coming next month

Upcoming Smartphones in December: If you are also eager to know about new smartphones or are planning to buy a new mobile phone, then it would be better to wait a bit. Next week or you can say that in the first week of December many handset maker companies are going to launch their new smartphones. tell me next week Infinix And iqoo About to launch its new handsets, let us tell you which smartphones are going to enter the market in the first week of December.

Upcoming Mobiles in December: These 3 smartphones will enter

Infinix Hot 20 5G Features (Expected): A 6.6-inch full-HD Plus display can be found in this Infinix 5G smartphone. With this, the MediaTek Dimension 810 chipset can be used. A 5000 mAh battery with 50 megapixel primary camera and 18 W fast charge on the back panel of the phone can be given to liven up the phone.

Infinix Hot 20 Play Features (Expected): Features like 6.8-inch HD display, 13-megapixel primary camera and MediaTek Helio G37 chipset can be seen in this Infinix mobile. In this device, 6000 mAh battery with 18W fast charge can be found to liven up the phone.

iQOO 11 Series Launch Date: Iku is also about to launch its new Iku 11 series in the first week of December. Under this series, iQOO 11 and iQOO 11 Pro smartphones will be launched on 2 December.

Qualcomm Snapdragon 8 Generation 2 chipset can be used for speed and multitasking in both these handsets. Apart from this, the Pro model can be brought with curved display and better camera.

At the same time, a 6.7-inch Quad HD Plus display can be found in IQ 11 with 144 Hz refresh rate. A 13-megapixel selfie camera can be given with a 50-megapixel primary camera on the back panel of the phone. A 5000 mAh battery with 120 W fast charge support can be found in the phone to bring life to the phone.

iQOO Neo 7 SE Launch Date: Along with the IQ 11 series, the company is also about to launch its new smartphone IQ Neo 7 SE. This handset can be launched with flagship features.

Talking about the features, this handset can be launched with 6.7-inch full-HD Plus display with 120 Hz AMOLED display, 5000 mAh battery with 120-watt fast charge, MediaTek Dimensity 8200 chipset and 64-megapixel primary camera sensor. .

OnePlus 11 render picture surfaced, camera design will be like this! See Leaked Features

Travel to Phuket with your partner on New Year, you will get double the fun on the beach with IRCTC package

Check these 2 things online before traveling in the train, otherwise you will catch your head later