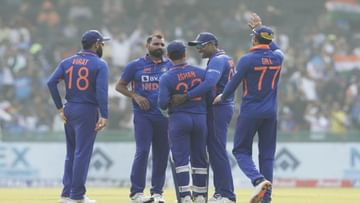 Shubman Gill scored 2 centuries in the 3 match ODI series against New Zealand. He scored a double century in Hyderabad and a century in Indore.

India beat New Zealand 3-0 in the ODI series. Shubman Gill was the hero of this victory of India, who scored a total of 360 runs including 2 centuries in this entire series. Gill scored a double century in the first ODI and a century in the last match. Gill dominated in both these matches. The spectators who were happy with Gill’s innings also did not lag behind in enjoying him during this period. Viewers are viewers, India’s star batsman Virat Kohli also reacted to the sloganeering of the audience.

On seeing Gill in Hyderabad and Indore ODIs, the audience started chanting Sara Bhabhi, Sara Bhabhi. In the third ODI, India scored 385 for 9 wickets in 50 overs on the basis of centuries by Gill and Rohit Sharma, after which the Indian bowlers bundled out New Zealand for 295 runs in 41.2 overs and won the match by 90 runs. took. India made a clean sweep in the ODI series against New Zealand after Sri Lanka.

The spectators, who were happy with India’s performance, were surprised when Kohli also started having fun on their sloganeering for Gill. During the match, some fans suddenly started shouting slogans after seeing Gill. Gill’s name is being linked to Sara for a long time. However, no official announcement was made on this relationship from either side. The video of this sloganeering is becoming quite viral on social media.

Talking about India’s victory in Indore, with this victory, the Indian team became the number one ODI team in the world. He got a total of 114 rating points. Gill’s bat went well in this series, but Kohli’s bat remained calm. He scored a total of 55 runs in the 3-match series.

After the match, Shubman Gill chose Kohli as the better player, not Sachin Tendulkar. In fact, in an interview after the match, Gill was asked to choose a better player between Kohli and Tendulkar. Gill chose Kohli. Explaining the reason behind this, he said that his interest in cricket was due to Kohli, but it was because of Sachin’s influence on his father that he was put into this game in his childhood.

india vs new zealand sachin tendulkar Shubman Gill virat kohli
Share. Facebook Twitter Pinterest LinkedIn Tumblr Email
Previous ArticleBudget 2023: Will the subsidy on electric vehicles increase or will you have to remain empty handed, know the details
Next Article ‘There is no point in protesting now because’- MP Home Minister’s statement again on Pathan