Fans started crying when Iran football team sang the national anthem, there was a ruckus outside the stadium 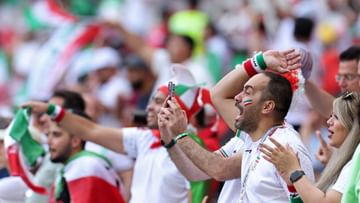 Iran vs Wales Controversies: FIFA World Cup-2022 is currently being played in Qatar. This World Cup is still being remembered for its vicissitudes, but controversies are also associated with this World Cup. The Iranian team did not sing the national anthem in their first match against England. Iran’s team landed against Wales in their second match on Friday, but in this match, the national anthem was sung by the players of the team. During this, however, many fans of Iran were seen crying in the stadium.

Before the match, the fans supporting the government were seen harassing those who are against the government. At the Ahmed Bin Ali stadium, some fans of Iran carrying the flag of their country were shouting slogans against those who were walking around wearing T-shirts with the slogan ‘Women, Life, Freedom’ of the movement taking place in the country. At the same time, when the women were giving interviews to the media outside the stadium, during this time a small group of men were raising slogans of ‘Long live the Islamic Republic of Iran’ against them.

During this, many women were seen in awe as the supporters of the government of Iran surrounded them with the national flag and were capturing them in their phone cameras. A 35-year-old woman named Maryam was approached by some men honking as she got the slogan ‘Mahila, Zindagi, Azadi’ painted on her face. Vanya, 21, who lives in Qatar, said she was scared to go back to Iran. He wrote in his report by the news agency AP quoting him, “I am worried about my safety here.”

Former Iranian football player Voria Ghafori was arrested on Thursday. Some fans wore caps with his name on them. He said, “It is obvious that the match has been politicized this week. You can see that only people of one country are hating each other.


This led to the movement

In fact, on September 16, 22-year-old Masha Amini died in police custody in Iran. After this, agitations against the government have started in the whole country. For this reason, in support of these agitators, Iran’s football team did not play the national anthem in its first match of the FIFA World Cup and stood quietly when the national anthem was played.