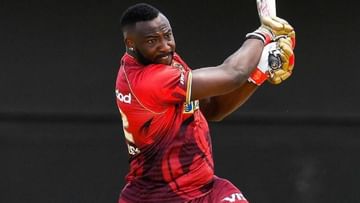 In the 23rd match of the Caribbean Premier League, St Lucia Kings defeated Trinbago Knight Riders by one run, Russell-Naren could not win the match.

Russell-Naren could not win the match against Trinbago Knight Riders

Andre Russell and Sunil Narine… these two names are known for their quick hitting. As long as these players remain on the crease, it rains for sixes and fours, but in the Caribbean Premier League, despite both of them staying on the crease till the last ball, the team lost. Talking about Trinbago Knight Riders, who suffered a one-run defeat to St Lucia Kings in the 23rd match of the CPL. St Lucia Kings had scored just 147 runs but Trinbago Knight Riders could not win the match, due to Russell and Narine running between the wickets.

Now you must be thinking that if Russell batted so well, then how did he become the reason for the team’s defeat. In fact, Russell and Naren had a very bad run during their partnership. Both missed the opportunity to take 2-2 runs, which the team had to pay by losing by one run.

Roston Chase received the Player of the Match award. This all-rounder took 3 wickets for 17 runs in 4 overs. Chase dismissed batsmen like Colin Munro and Nicholas Pooran. Let us tell you that with this defeat in the Caribbean Premier League, Trinbago’s team is at number four. At the same time, St Lucia Kings have reached the second place with the fourth win.