Will give a bottle of liquor for Rs 50 if voted to power in Andhra Pradesh: State BJP chief 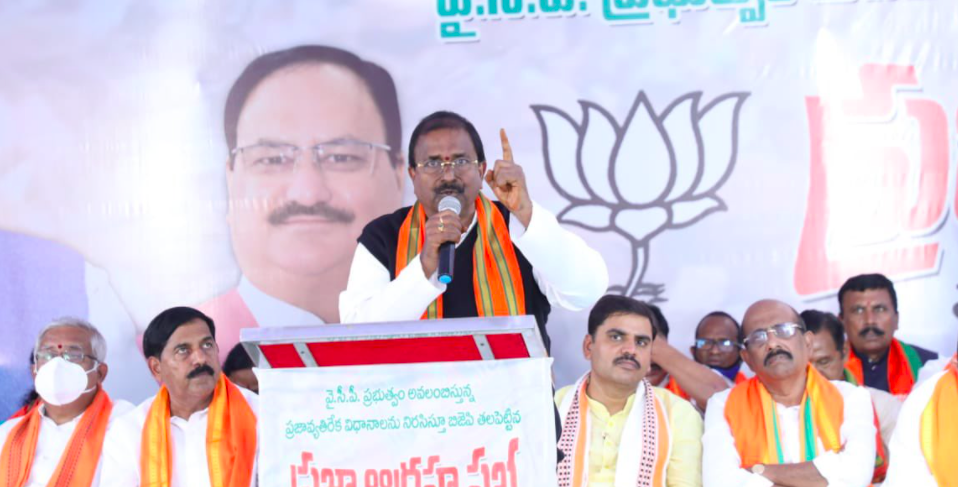 Amravati: The Bharatiya Janata Party (BJP) has promised a bottle of liquor for Rs 50 to the people of the state if it wins the 2024 assembly elections in Andhra Pradesh.

The BJP state president said that despite having abundant resources and long coastline, political forces have failed to develop the state.

In an indirect reference to the high cost of liquor in the state, Veeraraju said, “I am telling you that one crore people drink (liquor) in the state. You vote for BJP, we will give you liquor for Rs 75. If there is good revenue, we will give it for just Rs 50, (not bad liquor) for sure good ones.

Referring to the Direct Benefit Transfer scheme of the YRS Congress Party-led government, the BJP leader told the people that in a month an average person drinks liquor worth Rs 12,000 and Jagan Mohan Reddy collects all this money and gives them in the name of a scheme. giving back.

Veeraraju said the BJP was committed to making Amaravati the capital and would develop it in three years if it wins the state.

Criticizing the changes brought by the YRS Congress government in the availability and prices of liquor in the state as part of its promise to implement a phased prohibition, Veeraraju alleged that the government itself was making country liquor and booming beer, according to news agency PTI. such as unknown local brands, while popular brands such as Kingfisher have disappeared.

“They had said there would be a total prohibition, but they themselves are manufacturing and selling brandy,” he said.

During this, Veeraraju described the Communists as ‘barking dogs’ and alleged that the Left parties had ruined the country.

Defending his remarks, the BJP leader said he talked about the poor and the needy as the government was “robbing” them by increasing the prices of liquor.

Veeraraju said at a press conference in Vijayawada, ‘I have always been a pro-poor. If we reduce the prices of liquor, it is equivalent to giving Rs 6,000 to my sisters (housewives). You (state government) cannot play with the weakness of poor people. It is not encouraging the consumption of alcohol.

Wah…what a scheme! What a shame 😝 AP BJP stoops to a new low

National policy of BJP to supply cheap liquor at ₹50 or is this bumper offer only for states where the desperation is “high”? https://t.co/SOBiRq5gNu

On this statement of the BJP leader, Telangana Information Technology and Industry Minister KT Rama Rao said that the state BJP has reached the ‘lower level’.

Rama Rao said in a tweet, ‘Wow, what a plan. What a shame. State BJP has reached even lower level. BJP’s national policy of supplying cheap liquor for 50 rupees or this bumper offer is only for those states where there is more despair.