The lapse in the security of the Prime Minister is not the purpose of alleviating the hunger for coverage. 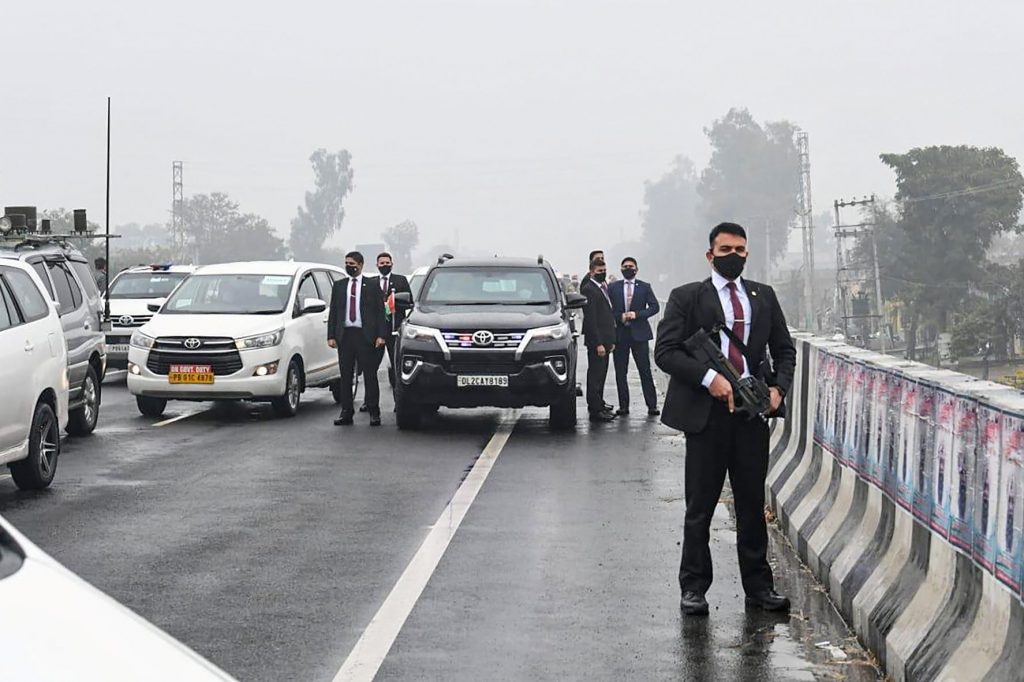 There has been a lapse in the security of the Prime Minister. This question does not need much debate about how many people came to the rally, how many did not. The Punjab government may have a role in security arrangements but it is under the SPG. Where the Prime Minister will go and who will sit next to him is all decided by the SPG. Therefore, the first action should be from the central government.

The BJP’s reaction to the lapse in the Prime Minister’s security and the media debates complement each other. It seems that the issue of security lapse has become the content for both the event and then the debate through the event.

The distance from Bathinda Airport to Hussainiwala’s National Martyrs Memorial is being told from 111 to 140 kilometers. If you have gone by road, then you will also have an idea of ​​​​return because the weather has been bad throughout the day. When the Prime Minister of India has taken such a long road trip, I do not remember.

It is not an easy task to travel for two hours and keep such a long highway guarded till you come back. This can happen only when everything is decided in advance. That day or at intervals of few hours can be done only in emergency but not normally.

The weather in Punjab was bad, it must have been known even before flying from Delhi to Bathinda. Shouldn’t the visit have been postponed then?

The Prime Minister’s Office should answer that when was it decided to go to Hussainiwala by road? Because the Press Information Bureau (PIB) had issued a press release on 3 January. In this, there was no mention of Hussainiwala in the program told by the Prime Minister.

A few months ago, this Modi government handed over the 50 km radius adjacent to the border to the BSF. While doing so, the issue of national security was exaggerated. There are also reports of drone attacks from across the border in Punjab. Did the BSF know that Prime Minister Hussainiwala might visit the martyr’s memorial? What was the preparation for them at that holy place? Was the BSF chief present there? The answer is no.

We all know by now that the responsibility of the security of the Prime Minister rests with the SPG. This is its only job. How the SPG will take the decision, it is not decided by the Prime Minister, but it is a blue book, it is decided accordingly.

For this, the SPG, intelligence agencies and local police take a decision together, but the final decision is taken by the SPG. Whose goal is zero error. So the SPG should tell that when it was decided to go to Hussainiwala, that too by road for such a long road? If the green signal was taken from the Chief of Punjab Police, then what was the information of the intelligence agency?

We have also learned that wherever the program of the Prime Minister is held, several days before the security agencies start visiting the district. The SPG, in a way, subdues the police. So what were the inputs of the security agencies? Did the intelligence agencies approve the Punjab Police chief’s green signal that the path is clear, there is no risk?

Journalist Mitu Jain your tweets I have raised many important questions. They say that if the farmers were blocking the way, then why did the SPG make the Prime Minister wait there for twenty minutes?

The BJP says the protestors (seen waving BJP flags) were BJP workers who came to the scene AFTER the PM’s cavalcade made a U turn. How were civilians allowed on a sanitized route and that too with tempos and buses when the PM was still in line of sight. 8.

The video that has been released is from the convoy of the Prime Minister. Mitu Jain also has a question as to why the photographer was allowed to make the video in front of the convoy and it is seen in the picture that the SPG is standing next to the prime minister’s car but not in front. Why is it left so open?

With these questions, Mitu Jain says that if this mistake has happened, then the head of the SPG should be sacked. Till now the central government has not taken any such action.

The Punjab government may have a role, but in the matter of the security of the Prime Minister, its role is under the SPG. The SPG decides where the Prime Minister will go and who will sit next to him. Therefore, the first action should be from the central government.

Didn’t all the agencies know that even before the arrival of the Prime Minister in Punjab, farmers’ demonstrations were going on from place to place, which he had announced on January 2. Then why so much risk was taken?

Is it the responsibility of the Punjab government or the central government? By law, Home Minister Amit Shah should resign, but all this is now an old thing.

The whole effort is to create debate. When the content for the debate came from the event, the BJP leaders started chanting Mahamrityunjay. Mahamrityunjaya is not chanted in this way in a hurry. Shivraj Singh Chouhan tweeted that Mahamrityunjay is going to chant and priests are saying that they left after worshiping Ganapati. Shouldn’t this be considered a gimmick?

Leaving the basic questions of security, there were programs of worship so that Godi could give content to the media for debate and coverage the next day and only Modi Modi would happen.

There has been a lapse in the security of the Prime Minister. This question does not need much debate about how many people came to the rally, how many did not. Every government blocks the path of rallies. The thing is, when was the decision to cover a distance of more than a hundred kilometers by road? Has PM Modi done such a long journey by road before?

Officially no one is saying anything. A statement has come from the Ministry of Home Affairs, which has been issued by PIB. It has written about going to Hussainiwala but it is not written that the program was pre-decided. Who was aware that Prime Minister Hussainiwala was going by helicopter?

Then why was it not mentioned in the Prime Minister’s program which he himself had released on 5 January. If there is a distance of 10-12 kilometers between Hussainiwala and the rally site, then the matter of keeping the journey of one place a secret does not fit much.

There is one more big question going on. A news comes quoting news agency ANI that ‘Thanks to my CM, I came back alive from Bathinda.’

According to ANI, the Prime Minister has told this to the officials at the airport. Somebody tried to find out to which officials said this and ANI printed it and this headline is made everywhere.

If the answer does not come, then it should be assumed that this information of ANI is not beyond doubt. Was it released thinking such a headline was made? Did you see in any coverage that journalists are looking for those officers, talking to them?

Your destiny should not be decided by gimmicks. Must be with concrete questions and answers. The prime minister’s track record has been that he makes himself an issue. When people were starving during demonetisation, the Prime Minister first made fun of him abroad but started crying after coming to India. Such has been the record.

This time it has not happened, so the questions should be answered seriously. Must be given officially. Rest you keep making memes.

(This article was originally published on Ravish Kumar’s Facebook page.)

According to the notification issued by the National Health Mission, Madhya Pradesh, recruitment will…

Preparation for the budget has intensified. Recently, the Finance Minister met industry and farmer…