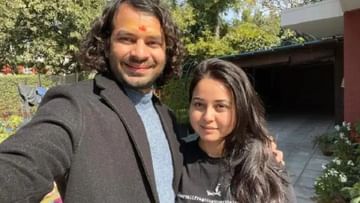 The BJP is attacking after the picture of brother-in-law Shailesh in the government meeting with Tej Pratap came to the fore. After which Lalu’s daughter Rohini Acharya has taken the front to answer the BJP.

In a government meeting with Lalu Prasad’s elder son Tej Pratap Yadav Lalu Prasad Yadav K’s son-in-law and Tejashwi’s brother-in-law Shailesh Kumar were also seen sitting. After which the BJP has become an attacker and Nitish is telling the entry of son-in-law in the Tejashwi government. After the continuous attack on the Lalu family of BJP, Rohini Acharya, daughter of Lalu Prasad, has taken the front. Rohini Acharya, daughter of Lalu Prasad, who lives in Singapore, has strongly attacked BJP by tweeting one after the other,

Rohini has tweeted about the Shahnawaz Hussain rape case case – Sanskari used to work, your cultured brother-in-law used to rape by giving intoxicants. Is the answer or this too abba jabba dabba ho gaya

Earlier, Rohini Acharya tweeted – See what has become of your Gujarat, God, the son of apologies, shaming humanity by calling the rapist cultured. . On Thursday, he had come to review the Bihar State Pollution Control Board. During this, he held a meeting with the officials of the Pollution Control Board. Tej Pratap’s brother-in-law Shailesh was also present in the meeting. Shailesh Misa is Bharti’s husband. He is also named in the illegal property case against the Lalu family.

BJP is a constant attacker

BJP is attacking after the picture of his brother-in-law with Tej Pratap surfaced. BJP leader Nikhil Anand has said that the polls of the Grand Alliance government are beginning to open. Nitish government will now be run not only by husband-wife and son-daughter but also by son-in-law. After this, Rohini took the front against the BJP.


What is the charge against Shahnawaz Hussain