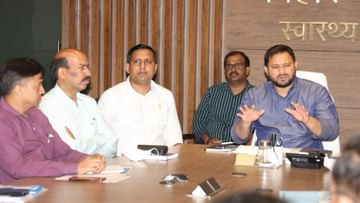 The BJP is attacking after the picture of Sanjay Yadav surfaced among the officials along with Tejashwi Yadav in the health department meeting. Sushil Modi has said that this is the work culture of the new government.

After the picture of Misa Bharti’s husband and her elder brother-in-law Shailesh Kumar surfaced in Tej Pratap Yadav’s meeting with pollution control board officials on Thursday. Tejashwi Yadav In the meeting of the Health Department, a picture of Sanjay Yadav has come to the fore among the departmental officers. After which BJP has taunted. Bade Miyan To Bade Miyan Chote Miyan Subhan Allah, BJP leader Sushis Modi has said that – Lalu Prasad Yadav’s elder son Minister Tej Pratap Yadav makes his brother-in-law sit next to him in departmental meetings, while his younger brother, Deputy Chief Minister Tejashwi Yadav serves as departmental officers in the Health Department. The middle makes Sanjay Yadav sit beside him. who is his advisor. He also calls them party workers. After the minister Tejpat Yadav, the picture of Deputy Chief Minister Tejashwi Yadav has also come to the fore and the most surprising thing is that the picture of Tejashwi Yadav has been released by his elder brother Tej Pratap Yadav himself in his defense.

Earlier, his elder brother-in-law Shailesh was seen with Tej Pratap Yadav, Minister of Forest and Environment Department in the Nitish government. In fact, Tej Pratap Yadav had arrived on Thursday to review the Bihar State Pollution Control Board. During this, he held a meeting with the officials of the Pollution Control Board. Tej Pratap’s brother-in-law Shailesh was also present in the meeting. Shailesh Misa is Bharti’s husband. He is also named in the illegal property case against the Lalu family.