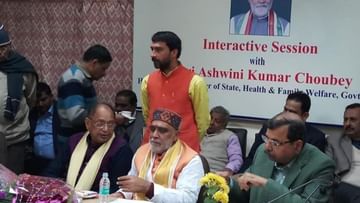 Picture wise has come to the fore in RJD-BJP in Bihar. RJD has released a picture of BJP leaders with relatives, saying in what capacity their relatives were involved in the government program.

Tej Pratap Yadav with his brother-in-law and Tejashwi Yadav The BJP is attacking after the picture of his advisor Sanjay Yadav surfaced with him. BJP has said that the poll of the Grand Alliance government is beginning to open. Nitish government is now being run not only by husband-wife and son-daughter but also by son-in-law. After this, RJD has also retaliated on BJP through pictures. RJD has released many pictures one after the other and questioned the BJP.

RJD released a picture of Union Minister Ashwini Choubey with her son Shashwat Choubey standing behind her. RJD has questioned through this picture what Ashwini Choubey’s son is doing in the government program.

Although Misa Bharti’s husband Shailesh and Tejashwi Yadav’s advisor Sanjay Yadav, seen in Tejashwi Tej Pratap’s picture, are sitting with the officer on the chair in the departmental meeting, while the counter-picture released by RJD shows Ashwini Choubey in a public event. And his sons are standing behind him. Interactive session with Ashwini Kumar Choubey is written in the back of the picture.

At the same time, in the picture of Nitin Naveen, his wife is giving him bouquets. During this, some of his relatives are also present. This claim belongs to RJD. Both the pictures are not of any departmental meeting. When the picture was taken and where was the picture of Ashwini Choubey, RJD has also not clarified.