National Conference will move Supreme Court against the recommendations of the Delimitation Commission: Farooq Abdullah 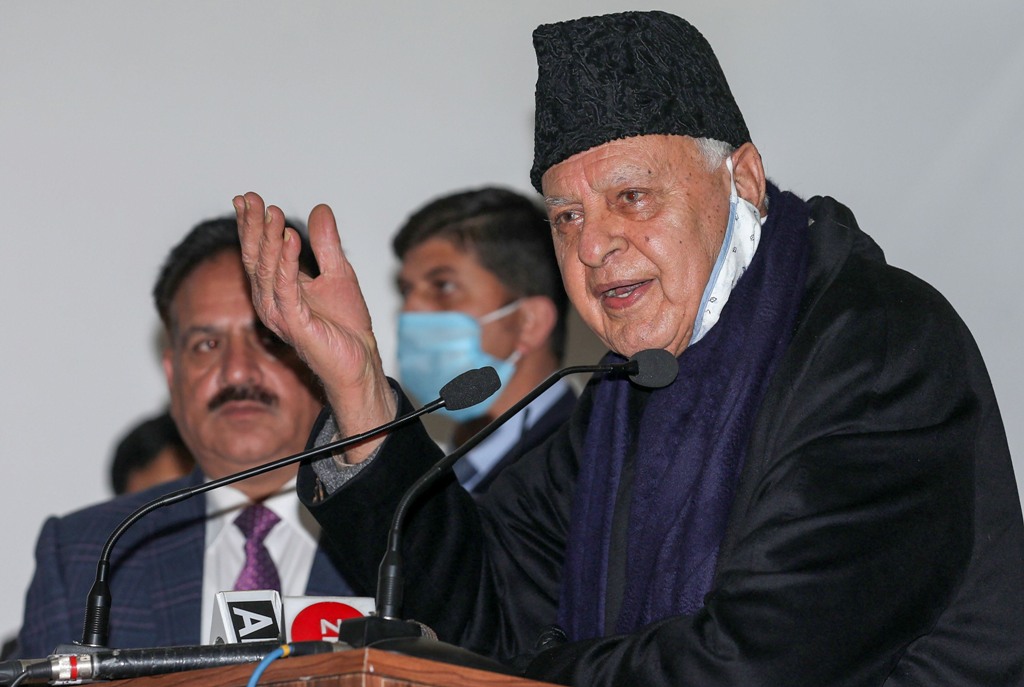 The Delimitation Commission has proposed six seats in Jammu region and one additional seat in Kashmir, reserving 16 seats for scheduled castes and tribes. National Conference President and former Jammu and Kashmir Chief Minister Farooq Abdullah said that the party believes that the very basis of the exercise of delimitation is illegal.

New Delhi: National Conference President and former Jammu and Kashmir Chief Minister Farooq Abdullah on Friday said his party is preparing to move the Supreme Court against the recommendations of the Delimitation Commission and the party believes that the very basis of the exercise is illegal.

Abdullah, a three-time chief minister of Jammu and Kashmir, also said that the time has come for the opposition parties to come together and fight the forces bent on destroying the secular fabric of the country.

Giving a detailed account of the talks held during the meeting with the Delimitation Commission earlier this week, senior leader Abdullah said, “The first point we raised in the meeting was that the commission is illegal as the party challenging the reorganization of Jammu and Kashmir.” The petition was pending in the Supreme Court.

However, the commission’s chairperson Justice (Retd) Ranjana Desai countered the National Conference’s arguments, saying that as far as the commission is concerned, they were empowered by the government and hence they did their job.

“But what the Supreme Court will finally say will be binding on them (the commission) also, so that the situation is clear,” Abdullah said. After that he also described other parameters. Now we are preparing to go to the Supreme Court.

On the court not interfering with the recommendations of the previous delimitation commissions, Abdullah said that the present commission was formed after the abrogation of the special status of Jammu and Kashmir, which has been challenged in the Supreme Court and no order has been passed on it so far. Is.

He said, ‘That’s why… we are going to the Supreme Court. Others have also gone.

Minister of State in the Prime Minister’s Office Jitendra Singh had claimed after the Delimitation Commission meeting on December 20 that he and other National Conference members were satisfied.

Referring to the reservation of nine seats for the Scheduled Tribes and seven for the Scheduled Castes in the preliminary report of the Commission, Abdullah said, “We are not against the Scheduled Tribes reservation. He had 15 members even without reservation. Therefore it is nothing new. The (population of) Scheduled Castes has also increased in the last few years… Kashmiri Pandits have long been yearning for this. What about them, the Sikhs and the people of Pakistan-occupied Kashmir? I am sure it is going to further divide communities and it is a tragedy.

Referring to criticism from some quarters for attending the second meeting of the Delimitation Commission, the National Conference leader said, “Even if we do not participate, they will criticize us.” That’s why criticism is a part of this life and we don’t get worried by criticism. They (critics) give us strength. We participated, so we got to know what’s in it and what did they do? How have they done it?’

Asked about attending a meeting chaired by Congress President Sonia Gandhi recently in Delhi, Abdullah said, “If we want to save this country, (and) it from Partition and its existence, we want to save it.” And unity is necessary if you want to avoid harm. ,

Abdullah said, “Unity is the priority and fortunately Sonia Gandhi’s efforts are there for that.” We should appreciate that they have taken this step. This is a good start and I am sure it will translate into a good unity before the 2024 elections. I am sure there will be more meetings, more people will come together because we cannot defeat the communal forces alone. They have to be a part of (united opposition).

On differences between the Congress and the Mamata Banerjee-led Trinamool Congress, he said things have to be sorted out and they will be sorted out, no doubt about it… If we want to work on the future, we have to leave the past behind.

Abdullah said, ‘So our intention is to bring this India back on the track that we all dreamed of and we are no longer afraid that we will be put in more jails under various harsh laws.’

Asked about the Enforcement Directorate and CBI probe against him, Abdullah said he would come out as the strongest person out there.

He said, ‘It doesn’t matter. It is part of life that you have to face. You don’t run away from it and I will come back as a stronger person.

It is to be known that the Delimitation Commission constituted for the purpose of re-determining the boundaries of assembly constituencies for the Union Territory of Jammu and Kashmir, while reserving 16 seats for Scheduled Castes and Scheduled Tribes, six additional seats in the Jammu region and one additional seat in the Kashmir Valley. has been proposed.

This has been objected to by regional parties such as the National Conference, accusing the commission of allowing the political agenda of the BJP to dictate its recommendations.

How effective are grapes for falling hair and skin? Know its surprising benefits

If we look at the last few years, there has been an increase in the…

The way foreign investment and business of foreign industries are increasing in India. His expectations…

How effective are grapes for falling hair and skin? Know its surprising benefits