Nagaland: Center constitutes committee to look into the possibility of removing AFSPA from the state 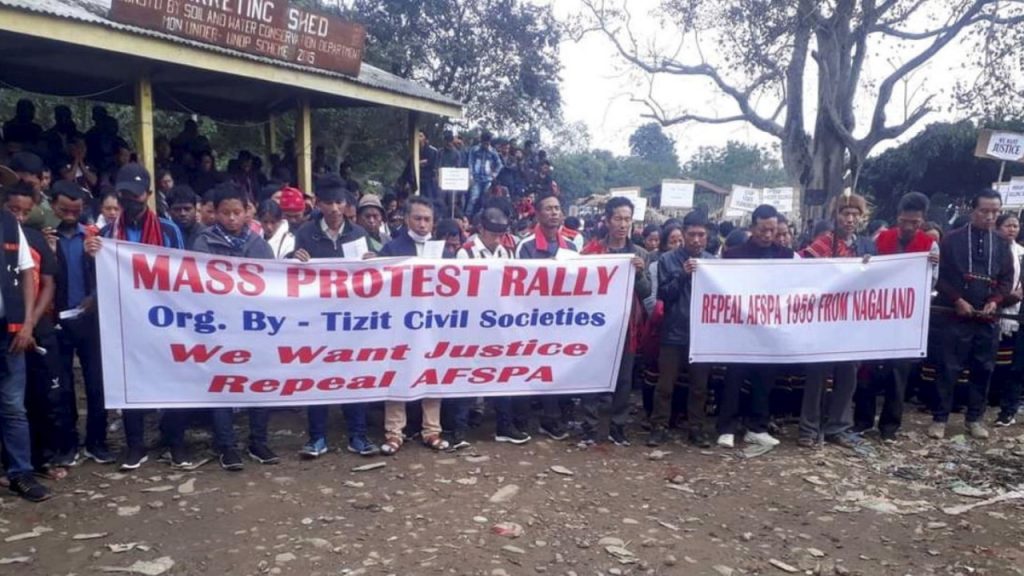 The Center has constituted a five-member committee headed by the Registrar General of India and Census Commissioner Vivek Joshi to look into the possibility of lifting the controversial AFSPA in Nagaland for decades in the wake of heightened tensions following the death of 14 people in army firing. Which will give its report in 45 days.

In Nagaland, people of the North-East are continuously protesting against the death of civilians in the firing of security forces and demanding the removal of AFSPA. (Photo: PTI)

New Delhi: The Center has constituted a high-level committee to look into the possibility of scrapping the controversial Armed Forces Special Powers Act (AFSPA), which has been in force in Nagaland for decades, to defuse tensions in Nagaland after 14 people were killed in firing. . The officers provided this information.

Registrar General of India and Census Commissioner Vivek Joshi will head the five-member committee, while Piyush Goyal, Additional Secretary in the Union Home Ministry, will be the member secretary of the committee.

The other members of the committee are the Chief Secretary and DGP of Nagaland and the DGP of Assam Rifles, a government official said.

This committee will submit its report in 45 days. The committee will look into the possibility of removing AFSPA in Nagaland, where the law has been in force for decades. The decision will be taken on the basis of the recommendations of the committee.

Officials said disciplinary action is also likely to be taken against army personnel who were directly involved in an anti-insurgency operation in Nagaland’s Mon district in early December after a fair investigation. Army personnel can be suspended pending investigation.

Protests are being held in several districts of Nagaland for the withdrawal of AFSPA after an army contingent opened fire in Mon district, killing 14 civilians.

An official said that the decision to constitute the high-level committee was taken in a meeting chaired by Union Home Minister Amit Shah on 23 December.

Briefed the media with regard to the meeting chaired by Hon’ble @HMOIndia Shri @AmitShah on Dec’ 23, 2021 in New Delhi. Grateful to Amit Shah ji for taking up the matter with utmost seriousness. The State Govt. appeals to all sections to continue to maintain a peaceful atmosphere pic.twitter.com/a8CLuw3MM6

Earlier, the Chief Minister of Nagaland tweeted on Sunday, ‘Meeting was held in New Delhi on 23rd December under the chairmanship of Union Home Minister. I am grateful to Amit Shah ji for taking the matter seriously. The state government appeals to all sections to maintain a peaceful atmosphere.

Another official said that disciplinary proceedings, possibly a ‘court of inquiry’, would be initiated against the military unit and personnel directly involved in the Mon district incident and immediate action would be taken based on a fair investigation. The Nagaland government will give government jobs to the families of 14 people killed in the incident.

Home Minister Amit Shah had told Parliament on December 6 that a Special Investigation Team (SIT) has been constituted for a detailed probe into the incident of killing of 14 people in the firing by security forces in Nagaland. He has been asked to complete the investigation within a month.

AFSPA empowers security forces to conduct operations anywhere and arrest anyone without any prior warrant. In the Northeast, it is applicable in some districts of Assam, Nagaland, Manipur (except Imphal Municipal Council area) and Arunachal Pradesh bordering Assam.

Army said – action will be taken according to law for justice

The Army on Sunday said the investigation into the “tragic and unfortunate” death of people in a firing incident in Nagaland’s Mon district is progressing rapidly and all efforts are on to complete the investigation at the earliest.

The army also assured that action will be taken as per law with a view to “ensuring justice for all” in the matter. The army urged the people of the state to be patient and wait for the findings of the army’s investigation.

After the incident, the Army had ordered a ‘Court of Inquiry’ headed by a Major General posted in the Northeast region.

“The Indian Army extends New Year greetings to the people of Nagaland and we pray for good health, peace, happiness and prosperity for the people,” the army said in a statement. We once again deeply regret the loss of lives during the December 4 incident in Mon district. It is really sad and unfortunate to lose people’s lives.

The statement said that the investigation ordered by the army is progressing rapidly and all efforts are being made to complete it at the earliest.

The demand for withdrawal of the Armed Forces (Special Powers) Act, 1958, i.e. AFSPA, came from the Northeast after at least 14 civilians were killed in army firing between Oting and Tiru villages in Nagaland’s Mon district on December 4 and 5. Once again it is gaining momentum.

After the incident, various student organizations and political parties are demanding the removal of AFSPA, which gives special powers to the army.

National People’s Party (NPP) MP Agatha Sangma had also raised this issue in the Lok Sabha on December 7 and said that the Armed Forces Special Powers Act (AFSPA) should be removed from the northeastern states.

The Congress on Sunday demanded the resignation of Home Minister Amit Shah, targeting the central government over the firing incident in Nagaland. Along with this, the party also demanded compensation to the victims and an independent inquiry under the leadership of the sitting judge of the Gauhati High Court.

A Congress delegation that had gone to Dibrugarh Medical College to meet relatives of those injured in the incident earlier this month has submitted its report to party chief Sonia Gandhi.

Congress has made this demand a day after the report was submitted. The delegation included Congress General Secretary Jitendra Singh, party’s Nagaland in-charge Ajoy Kumar and MP Gaurav Gogoi.

Kumar shared the findings and contents of the report submitted to Gandhi by holding a press conference here.

The Congress delegation, in its report, sought Shah’s resignation, alleging that the Nagaland incident happened due to the BJP’s “failed policies” in the Northeast.

The report alleged, “This unfortunate incident has once again displayed a massive intelligence failure, hence it is a failure of the Ministry of Home Affairs.” Moreover, the Home Minister was addressing political meetings in Rajasthan instead of focusing on the situation in Nagaland. This shows the step-motherly behavior of the Center towards the Northeast.

Kumar accused Shah of making false statements and “telling lies” in the Lok Sabha. He alleged that Shah’s statements were completely false and contrary to the information on the ground.

Kumar said that people were fired without warning. He also demanded that the victims of the violence should be given a compensation of Rs one crore by the central government and a government job to the families of the deceased.

He said that the injured should be given a compensation of at least Rs 10 lakh.

The party in its report demanded an independent inquiry by a sitting judge of the Gauhati High Court.

Who is Veena Nagda, who will apply henna on the hands of Mukesh Ambani’s daughter and now Kiara

Flying Academy is being started at Khajuraho Airport. Batch training will also start before the…

The title and promo of South Superstar Thalapathy Vijay’s upcoming film has been released. Tremendous…

Who is Veena Nagda, who will apply henna on the hands of Mukesh Ambani’s daughter and now Kiara

According to the report, celebrity artist Veena Nagda will apply henna on the hands of…