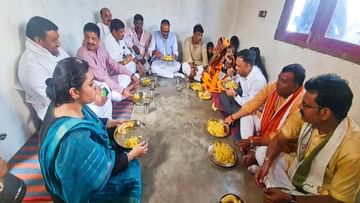 Deputy CM Brajesh Pathak said that Unnao district is in the priority of the Uttar Pradesh government. Where the Prime Minister has schemes for the welfare of the poor, he reaches the people 100 percent.

Uttar Pradesh Deputy Chief Minister and Health Minister Brijesh Pathak was on Unnao tour today. Where Deputy CM Dalit reached the street shopkeeper Anno Devi’s house. During this, the happiness of the Dalit woman knew no bounds after getting the Deputy CM in her midst. At the same time, the Deputy CM attended the Samarsata Bhoj at the Dalit’s house. Apart from this, DM Unnao Apoorva Dubey, CDO Divyanshu Patel, Sadar MLA Pankaj Gupta, MLA Anil Singh MLA, Hindu Jagran Manch Provincial Minister Vimal Dwivedi sat on the ground and ate khichdi at the Dalit’s house.

At the same time, Deputy CM Brajesh Pathak has helped the Dalit woman financially. During this, apart from the Deputy CM, Purva MLA Anil Singh gave financial help of 40,000 to the Dalit. There is no limit to the happiness of Dalits after getting the help of public representatives of the government. Only after this, after attending the Samarsata Bhoj at the house of Deputy CM Brijesh Pathak, a review meeting was held with the officers in Vikas Bhawan to review the development plans in the Vikas Bhawan auditorium. During this, the Deputy CM focused on education, health, roads, electricity, water.

Unnao district in the priority of the state government

The Deputy CM, listening prominently to the problems of the public, ordered the officers to settle them, for about an hour in the closed auditorium, gave a stern warning to the officers. According to sources, PWD, electricity and health department officials were on the deputy CM’s radar. During the interaction with the media, the Deputy CM said that all the departments in Unnao have been reviewed. He said that Unnao district is in the priority of the Uttar Pradesh government. Where the Prime Minister has schemes for the welfare of the poor, they reach the people cent percent. It has been reviewed point by point.

Along with this, the law and order situation of Unnao has been reviewed. He said that the rule of law will prevail in Uttar Pradesh. We are moving ahead under the zero tolerance policy in the district. We have our own district, we are determined for all-round development. In every situation, Unnao has to be brought to number one. Deputy CM Brajesh Pathak said in response to a question that the party you are talking about. Just 3 months ago the people of Unnao have rejected him. Has rejected not two times, not only Lok Sabha, assembly elections, but has lost four or four elections. If the 2024 Lok Sabha elections are held, you will lose the election badly. Where BJP will win 80 out of 80 Lok Sabha seats. Along with this, a government of thumping majority will be formed under the leadership of PM Narendra Modi.