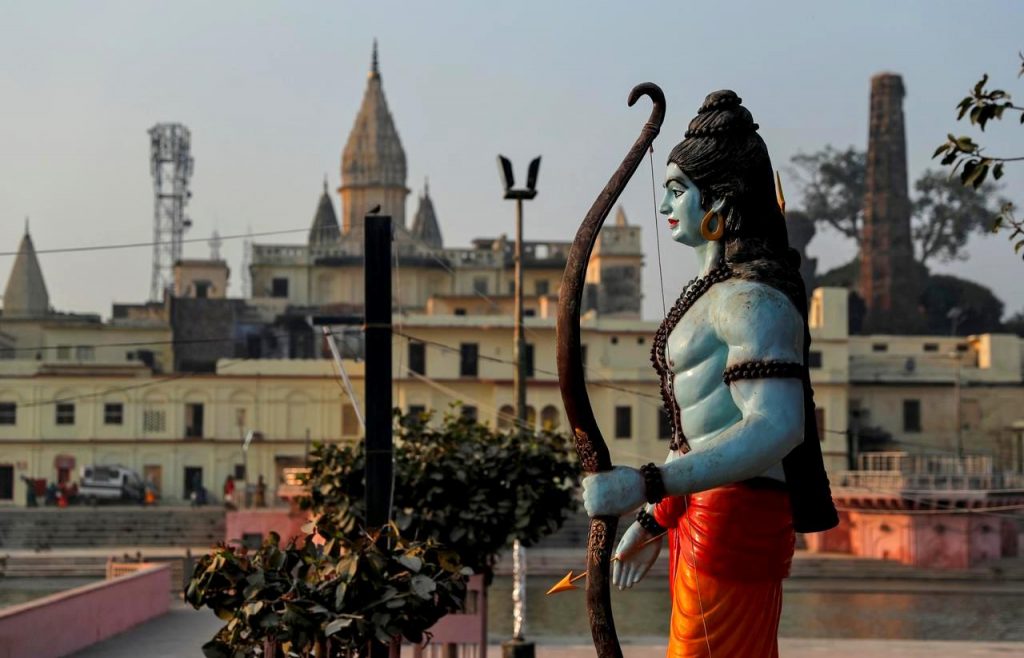 Lucknow/New Delhi: Uttar Pradesh Chief Minister Yogi Adityanath has ordered a probe into the alleged purchase of land around the under-construction Ram temple in Ayodhya by some politicians and administrative officials. A senior official of the state government gave this information on Wednesday night.

Earlier, the Congress alleged that several BJP leaders and some officials of the Uttar Pradesh government had bought land around Ram temple at throwaway prices and this ‘loot’ of land came after the Supreme Court’s verdict in the year 2019. Has been.

On the other hand, former Congress President Rahul Gandhi tweeted, citing the news related to the alleged purchase of land in Ayodhya, ‘Hindu walks on the path of truth, robs under the guise of Hindutva religion.’

Hindu follows the path of truth.

Hindutva loots under the guise of religion. pic.twitter.com/Jycl211qut

Party General Secretary and Chief Spokesperson Randeep Surjewala said that Prime Minister Narendra Modi should answer on the ‘loot of donations’ and ‘loot of land’ and the entire episode should be investigated.

Talking to reporters outside the Parliament complex in Delhi, he mentioned the names of some BJP MLAs in Uttar Pradesh and some senior officials of the local administration and claimed that BJP people have committed ‘Ram treason’ for which they are ‘sin and cursed’. ‘ are part of.

Surjewala said, ‘First donations were looted in the name of the temple and now there is loot to build wealth. It is clear that BJP is now committing Ram treason. There is direct loot of land. On one hand the lamp of faith was lit and on the other side the land has been looted by the people of BJP.

He claimed, ‘Now a new revelation has come to the fore that the land near the Ram temple under construction has been bought by BJP MLAs, Mayor, OBC commission members and top officials of the administration at throwaway prices. Even the lands of Dalits have been grabbed. All this was done after the court’s decision on the Ram temple case came.

The Congress leader said, ‘Lord Shri Ram is a symbol of faith, trust, dignity and Sanatan. But the people of BJP are running the business of loot in his name also. Prime Minister, tell me when will you open your mouth? The Prime Minister should also tell when (he) will get the investigation done for the loot of donations and loot of land?’

According to the Indian Express, Leader of Opposition in Rajya Sabha Mallikarjun Kharge raised the issue in the House. Calling it a land fraud, AAP leader and Rajya Sabha MP Sanjay Singh demanded an investigation.

At the same time, CPM General Secretary Sitaram Yechury also demanded an inquiry saying that the people mentioned in the report are in high positions.

In Rajya Sabha, Kharge said, this is a very important issue. You must have seen in today’s Indian Express, which states that MLAs and Mayors, Commissioners, SDMs, relatives of DIGs and other officials have bought land near Ram Mandir in Ayodhya.

However, his request to raise the issue was turned down by Chairman M. Venkaiah Naidu and said that a newspaper cannot be read and prior intimation is required. Kharge remained adamant and asked the Chairman to look into the issue.

Naidu said, “The procedure of the House is that newspapers cannot be read. You have to give notice.

Later addressing a press conference, Kharge said that he wants to raise the issue as it is important. He said that as soon as the opposition tries to raise an issue, adjourning the House has now become a practice.

He said, ‘Today (Wednesday) also I was raising the issue of Ayodhya. When I read the newspaper in the morning. There are at least 14 names in it, including MLA, Mayor, Deputy Commissioner, SDM, Divisional Commissioner and their relatives. We wanted to raise this issue.

He further said, ‘What is happening in Ayodhya. How much land has been grabbed, that too belonging to the Scheduled Castes and the poor. Big people are involved in this, because real estate prices are rising, so they are buying land. I wanted to raise this issue. As soon as I woke up, Vande Mataram rang.

AAP MP Sanjay Singh said that BJP leaders and officials are doing ‘land fraud’ in Ayodhya. He demanded setting up of an SIT under the supervision of the High Court or the Supreme Court to probe the land deals.

Singh said, ‘This scam is shameful. Every person has a contribution in the construction of Ram temple. Women have gone to the extent of selling their jewelery because of their faith and those in power have misused their trust and confidence.

CPM general secretary Yechury said, “The matter should be properly investigated and looked into as the people mentioned are in high official positions.” This report shows that betting of land is taking place there.

The Indian Express reported in one of its reports that local MLAs, close relatives of bureaucrats working in Ayodhya and even local revenue officials, whose work was involved in the alleged purchase of land around the under-construction Ram temple in Ayodhya. The transaction has to be certified, who has also bought these lands.

Records of 14 cases perused by this paper show that an MLA, mayor and a member of the State OBC Commission have bought land in his name in a five-kilometre area of ​​the Ram temple site.