Assembly elections announced in five states, voting will be held in seven phases in UP, counting of votes on March 10 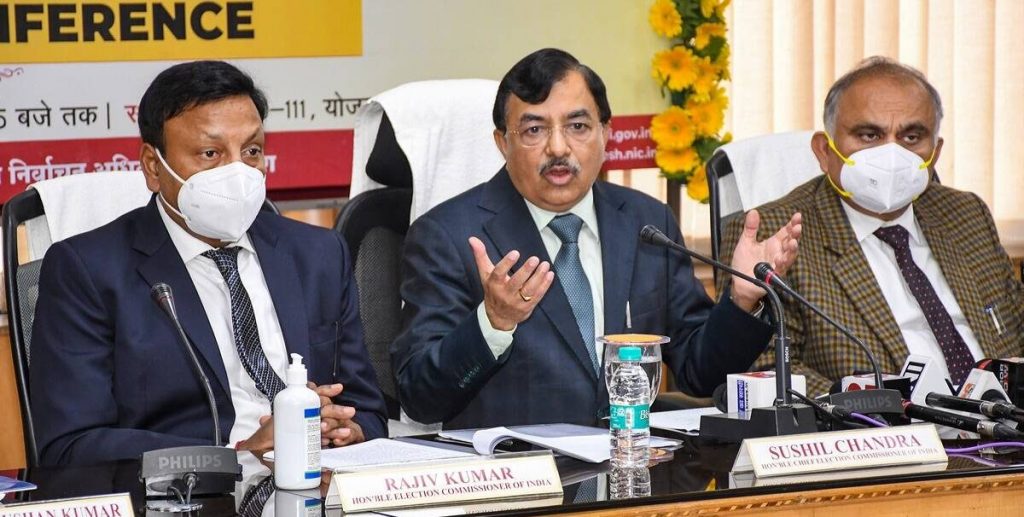 Manipur will go to polls in two phases on February 27 and March 3. The counting of votes for the assembly elections of all the states will be held on March 10.

Chief Election Commissioner Sushil Chandra announced the election related dates in a press conference. Chandra said elections will be held for 403 assembly seats in UP, 117 in Punjab, 70 in Uttarakhand, 60 in Manipur and 40 in Goa.

With the announcement of the elections, the model code of conduct came into effect in all the five states.

The Chief Election Commissioner (CEC) said that no road shows, padyatras, cycle or bike rallies and processions will be allowed till January 15 in view of the COVID situation. After that the situation will be reviewed and fresh instructions will be issued later, he said.

Uttar Pradesh to go to poll in 7 phases from 10th Feb to 7th March; Punjab, Uttarakhand and Goa to vote on 14th February & Manipur to vote on 27th Feb & 3 March; Counting of votes on 10th March: ECI pic.twitter.com/hxKms5e8hi

Apart from this, campaign curfew will be imposed during the election process between 8 am and 8 pm and there will be no victory rallies after the declaration of election results, the CEC said.

The Chief Election Commissioner clarified that it is mandatory for political parties to upload on their websites detailed information about persons with pending criminal cases selected as election candidates and why this particular candidate was chosen.

He said that the election process will be carried out following the guidelines related to prevention of corona virus and all the employees participating in it will be compulsorily ensured precautionary dose of anti-Covid-19 vaccine.

He said that facilities to protect against COVID like sanitizers and masks will be available at all the polling stations and the number of voter centers will also be increased.

In view of the spurt in COVID-19 cases, Congress has announced that it will not hold any rallies in Uttar Pradesh. At the same time, the party has urged Prime Minister Narendra Modi and Chief Minister Yogi Adityanath to refrain from organizing big public programs in the state.