Yashpal: ‘I write with the desire to live, to try to live…’ 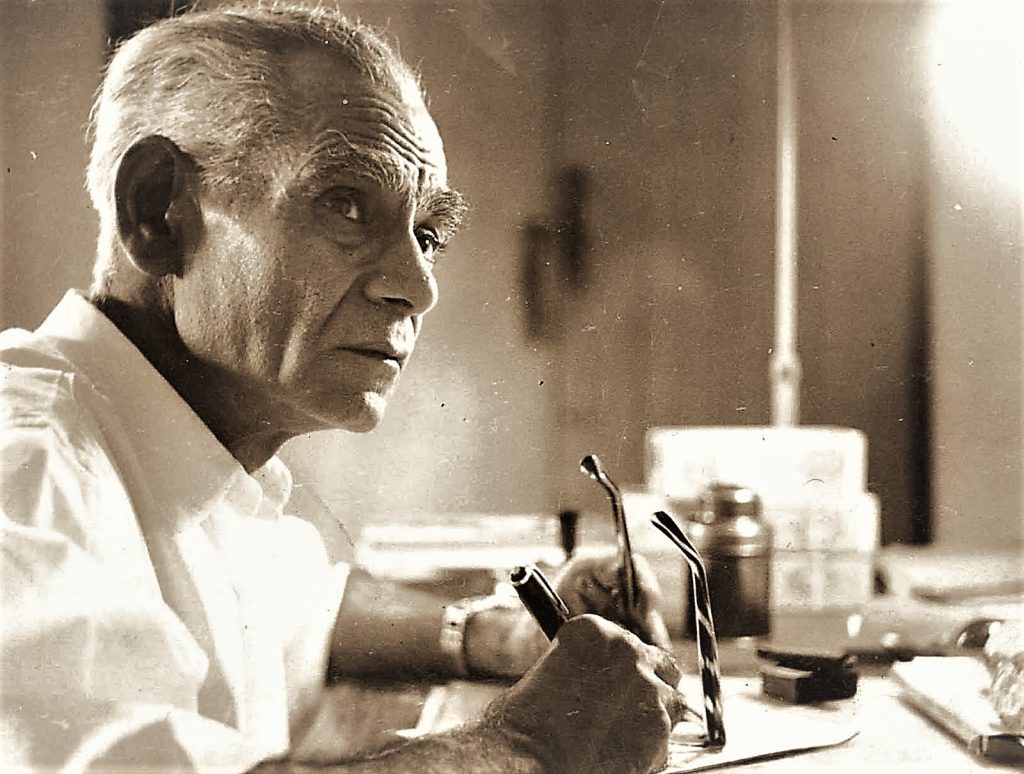 special: For Yashpal, literature was a medium to spread his ideas to a large mass of people. But the consciousness of rebellion and revolution, which was created by this literary, was the central spirit of all the writings of Yashpal. It was his revolutionary consciousness that questioned every status quo.

Born on 3 December 1903 in Ferozepur, Punjab, there are many sources of identity of Yashpal. Revolutionary, socialist-Marxist thinker, writer, all these sources connect with Yashpal. If he was a shoulder-to-shoulder ally with revolutionaries like Bhagat Singh, Azad in the freedom movement, then he wrote more than fifty books-stories, novels, essays, autobiography, possibly Hindi after Premchand. He was also the most natural and serious creator of.

The emergence of Yashpal’s ideology can be understood in the background of the Arya Samaj movement in Punjab in the late 19th century. As the mother was Aryasamaji, the entire sanskar of the house was built on such an idea where the emphasis on Vedic values ​​and education was natural.

Yashpal’s early education also took place in an Arya Samaji school in Haridwar, where education based on the Gurukul tradition laid the seeds of Yashpal’s core values ​​of life. In his autobiography ‘Overview’ Yashpal acknowledges the role of his mother, who was committed to the education of children, in the formation of his ideas.

The whole situation of leaving home and going to Gurukul at the young age of just seven years probably had planted the seeds of that unattached revolutionary in Yashpal, whose result is visible in Yashpal becoming a fierce revolutionary in the future. The rigorous discipline and practical study-churning of Gurukul had laid the foundation of hard work, restraint and perseverance in Yashpal’s life.

By the end of his schooling, Yashpal had transformed into a teenager brimming with political consciousness who had studied thinkers like Marx and Lenin deeply.

As a volunteer of Congress, Yashpal used to roam from village to village explaining the programs of Congress to the farmers. But in the process, he started to feel that the top Congress power sitting at the central level was completely oblivious to the problems on the ground, of the condition of the farmers and therefore its programs were also not designed according to the needs of the farmers.

But the result of this whole exercise was that Yashpal got the purpose of working by connecting with the roots and he could understand the Indian economy and social system more deeply.

Initially, Yashpal also wanted to practice according to the dreams of his mother, but this was the period when the process of disillusionment with the constitutional methods of the Congress started and a new class of anti-colonialism in the form of revolutionaries started their political career. Started making space.

Especially when Yashpal finished his Gurukul education and enrolled in the National College of Lahore for higher education, the process of differences with the Congress’s moderate party and their strategies only accelerated. This college was founded by the famous nationalist leader Lala Lajpat Rai and it was here that Yashpal, for the first time, came under the guidance of revolutionaries like Bhagat Singh and Sukhdev.

Yashpal’s political career truly began from this place, when he not only became a member of the Hindustan Socialist Republican Army (HSRA) but also tried to understand the ideology behind revolutionary extremism. The consciousness of this entire period, its experiences have been recorded by Yashpal in ‘Overview’.

In the role of a revolutionary, Yashpal did many experiments with Bhagat Singh. Even in the event of Bhagat Singh going to jail, Yashpal and his associates took the burden of implementing Bhagat Singh’s plans. Later, Yashpal along with Chandrashekhar Azad had planned to attack the Viceroy Lord Irwin, in which the Viceroy’s car was damaged, but Irwin survived.

Both the revolutionaries were arrested on charges of conspiracy to murder, in which Azad was martyred at Alfred Park in Allahabad and Yashpal was eventually arrested in Punjab in January 1932 and sentenced to 14 years of rigorous imprisonment. was heard.

It was during his stay in jail that he wrote his first story collection ‘Cage of Udaan’. This long stay of Yashpal can also be considered important from another point of view. He was the only political prisoner who was married in the jail premises.

Yashpal was introduced to his wife Prakashvati during the days of HSRA, when she too had come to join the organization after running away from her home. There were strict restrictions on love and marriage in the revolutionary commune and therefore when Yashpal and Prakashvati’s love was discussed, the organization issued fatwas against them and ordered to shoot them at sight.

In the overview, Yashpal explains how Yashpal handled this whole situation with great difficulty and got this fatwa revoked. When Yashpal was in jail, one day Prakashvati asked the top officer of the jail for permission to marry Yashpal and in the absence of any rules related to this, the officer also did not understand any reason for not granting permission and thus jailed. Both of them got married in the same year.

However, while in prison, Yashpal learned French, Russian and Italian languages ​​and thus also studied the literature of these languages ​​which acted as an inspiration for his ideological and literary mind.

Yashpal was finally released from jail in 1938 and this also proved to be the end of Yashpal’s political career. After this, the Yashpal as we know him was not a materially revolutionary Yashpal, but a writer Yashpal with the consciousness of a revolutionary. Therefore, if seen, Yashpal started the life of a writer later, but the amount of writing and quality in which he wrote, very few writers are able to write.

After coming out of jail, Yashpal along with wife Prakashvati published and edited the magazine ‘Viplav’, which continued throughout his life. Yashpal wrote a lot and ran his writings on various subjects. Both detail and density are seen in Yashpal’s creativity.

If Yashpal has given voice to his experiences as a revolutionary in Dada Comrade (1941), Deshdrohi (1943) and Party Comrade (1946), then Divya (1945) and Amita do the work of connecting history with contemporary relevance. (1956) did. Yashpal was awarded the Sahitya Akademi Award for his work ‘Meri Teri Uki Baat’ (1974).

There was also a well-thought-out ideology behind Yashpal’s literary work, which he has revealed in one of his articles. ‘Why do I write?’ Yashpal says in:

Therefore, for Yashpal, literature was a medium to spread his ideas to a large mass of people. But the consciousness of rebellion and revolution, which was created by this literary, was the central spirit of all the writings of Yashpal. Because it was Yashpal’s revolutionary consciousness that questioned every status quo.

The first evidence of this is found when we see that in the Gurukul Kangri tradition in which Yashpal was educated, his extreme insistence on discipline, physical restraint and chastity – his extremism – while questioning Yashpal Wrote the story ‘Dharma Raksha’, where it was shown how a Gurukul teacher who could not express his repressed desires due to Gurukul’s strict discipline, eventually forcibly raped a relative of his own.

Thus the psychoanalytical basis of repressed consciousness which was given by Freud, Yashpal shows a realistic reflection of it by his creativity.

Yashpal may have been associated with the Communist Party but the difference of ideological differences remained. The manner in which Yashpal’s composition vision represented women was probably far beyond the sensibility of the era and was a key point among many points of difference of opinion with the party.

In Yashpal’s novels and stories, the woman is portrayed in her most natural, natural form and as a human being devoid of any kind of divine aura, women come to Yashpal’s place. Be it Divya or Amita, women are here conscious of their mental and physical needs and rights, which seems to challenge patriarchy.

And this compositional vision in a way expands the nationalist questions of freedom in the freedom movement of that time because the question of women’s emancipation was a neglected subject at every level. In such a situation, Yashpal, as critic Nikhil Govind believes, uses the sexuality of women as a tool in the tradition of Jainendra and Agyeya to explain the patriarchal national-cultural thinking of the then society.

Yashpal was perhaps such a sensitive writer, who did not ignore women even while composing a vivid novel like Jhootha-Sach, written on the basis of Partition. Through characters like Tara, Banti, Yashpal gave the vision of finally seeing the partition of India as the atrocities committed on women much earlier, which history experienced after a long time.

Critic Sanjeev Kumar makes it clear in this regard how feminist historians such as Urvashi Butalia, Kamala Bhasin, Ritu Menon did the work of looking at Partition from a feminist point of view, but Yashpal was only in 1958 when women were thrown into the violence of Partition. were being given a reality only through imagination.

Yashpal’s literature needs to be read and understood for his strong faith in human values ​​more than his ideology. His authorial contribution should only be understood as a by-product of his solidarity towards the downtrodden and poor of the society, otherwise Yashpal as a revolutionary, a creator and a thinker was ultimately looking for a solution to social problems, social inequalities.

(Aditi Bhardwaj is a research scholar at Delhi University.)

breaking news breaking news in hindi headlines in hindi Hindi news india news latest news in hindi live news news in hindi not news The Wire the wire in hindi thewire no
Share. Facebook Twitter Pinterest LinkedIn Tumblr Email
Previous ArticleAfter 7 years, Rakesh Bapat will make a big comeback on TV, will be seen in a strong role in the daily soap
Next Article Fans will get a big gift on Hrithik Roshan’s birthday, the first look of ‘Vikram Vedha’ will be released