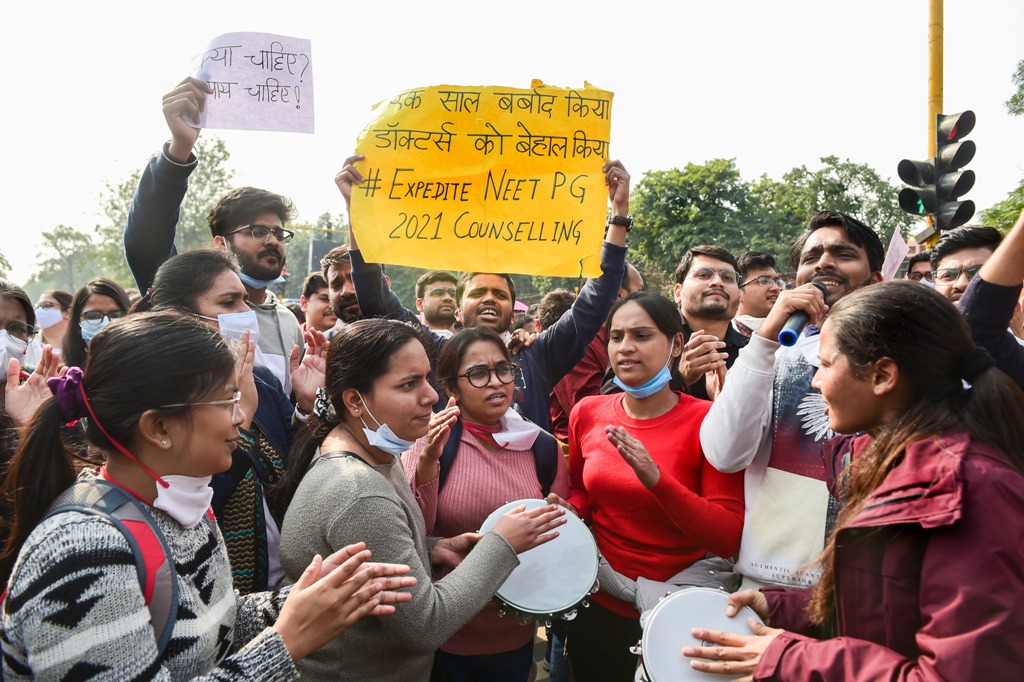 Doctors across the country are demanding immediate counseling of 50,000 MBBS doctors who have passed NEET-PG, so that recruitment of new doctors reduces the patient burden on them and they prepare themselves appropriately for the upcoming anticipation of corona virus epidemic. can do

Doctors protesting against the delay in NEET-PG counselling. (Photo: PTI)

New Delhi: In India, the threat of the Omicron variant of the corona virus is increasing rapidly, but in the midst of all this, thousands of government doctors of the country are forced to protest by closing the hospital.

They demand that 50,000 MBBS doctors who have passed the National Eligibility Test-Postgraduate (NEET-PG) should be immediately counseled.

The NEET-PG exam was held in September this year. After counseling these doctors get admission in medical colleges for further studies and treatment.

NEET-PG is conducted by the National Testing Agency (NTA), which comes under the Department of Higher Education, Union Ministry of Education. It conducts all the medical entrance exams in the country.

The doctors of the country are demanding immediate counseling because the recruitment of new doctors will reduce the burden of patients on them and will be able to prepare themselves smoothly for the upcoming anticipation of the epidemic.

After passing the postgraduate examination, young doctors work as junior residents for a period of three years. During this, they are mainly trained, where they treat patients in the emergency department and contribute to other important tasks.

Since appointments to the post of Junior Residents have been put on hold, there is a shortage of at least 50,000 doctors in India’s hospitals, due to which the situation could become more dire if the severity of the corona epidemic increases.

Usually, the NEET-PG exam was conducted in January every year, but this year it was postponed till September due to the pandemic. Now since earlier the exam was held in January, the counseling used to be done till March. But this year the government had said that due to the delay, it would be done in November. Now December has also passed and counseling has not been done, due to which there is a lot of anger among the doctors.

One of the major reasons for the delay in counseling of NEET-PG qualified students is the announcement by the central government to implement 10 percent reservation for Economically Backward Classes (EWS). The EWS Quota Act was passed by the Parliament in January 2019.

To be eligible under this quota, the family income of a person coming from the general category should not exceed Rs.8 lakh per annum. Describing many provisions of this law as arbitrary and unconstitutional, many people have challenged it in the Supreme Court.

After several hearings, the court has sent the matter to the Constitution Bench, where the matter is pending.

Meanwhile, in July 2021, NTA has issued a notice saying that the government is going to implement EWS quota from the 2021-22 session. While the final decision of the Supreme Court has not yet come on this law.

Due to this announcement, there was anger in some sections, after which a NEET-PG candidate challenged this notification of NTA in the Supreme Court.

The student, who has passed NEET-PG, argued that the constitutional validity of the EWS quota law has not been decided yet, so the Indian government cannot implement it.

The Supreme Court also started hearing this matter, in which a big question arose that on what basis the government has fixed the income limit of eight lakh rupees in the EWS quota. Since the same limit is in the Other Backward Classes (OBC) reservation also, the court asked the government whether they were trying to ‘equal the unequal’.

of case 25 November hearing Solicitor General Tushar Mehta, appearing for the Centre, said that the government will constitute a three-member committee to consider the provisions of EWS reservation and counseling will not be conducted till its report is received.

in between Solicitor General Justice DY Chandrachud Whether they can postpone the implementation of this quota till next year, as stopping the counseling will affect the entire year of the students.

Now the next hearing of this case is to be held in the Supreme Court on January 6, 2022.

The Union Ministry of Social Justice and Empowerment has constituted a three-member committee regarding this.

The Wire Science asked the officials of the ministry in this regard and asked the deadline of the report, but they refused to give any answer.

However, after this, the Union Health Ministry wrote a letter to the Law Ministry on December 6, in which he had said to tell the Supreme Court that we want to go ahead with counseling, because delaying it can have a bad effect.

The Law Ministry was asked to take necessary steps in this direction and approach the court at the earliest.

The matter was raised by several MPs in the winter session of Parliament. However, the government in its written reply claimed that the decision to fix the limit of eight lakh in EWS quota was taken after extensive study. However, the same government is now reconsidering it.

However, the doctors’ agitation continues, most hospitals are closed, patients are facing extreme hardship, the danger of a third wave of the epidemic is increasing and senior doctors have also threatened to resign if no immediate solution is found. .

In the midst of all this, the Modi government is just assuring that a solution is being found. However, nothing concrete has come out yet.

Experts say that if there is no immediate counseling of doctors, then we may have to see a very dire form of the epidemic.

breaking news breaking news in hindi headlines in hindi Hindi news india news latest news in hindi live news news in hindi not news The Wire the wire in hindi thewire no
Share. Facebook Twitter Pinterest LinkedIn Tumblr Email
Previous ArticleShahid Kapoor did not want the film ‘Jersey’ to be released on OTT, so the actor took this big step
Next Article Bihar: 3.5 lakh cases registered since prohibition, cases in courts and inmates in jails