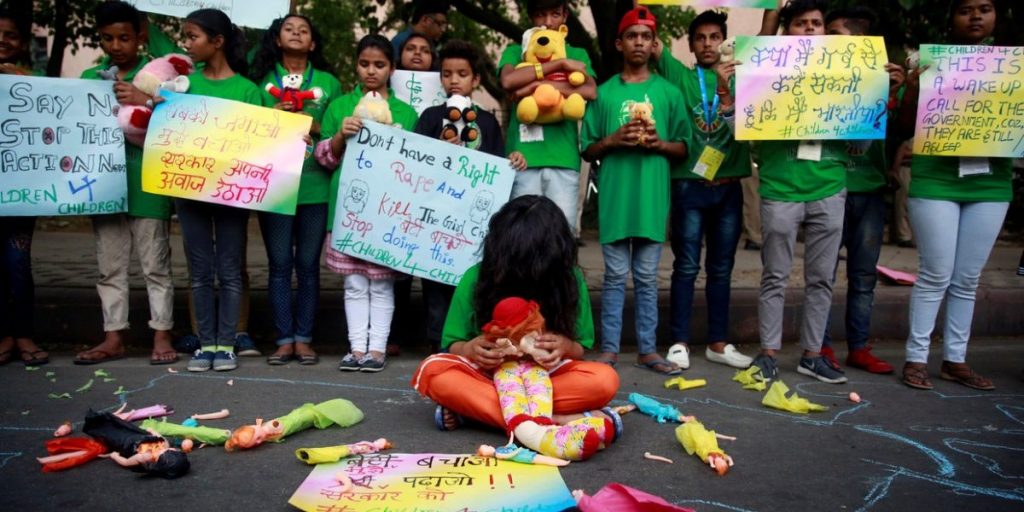 The policemen convicted in the Kathua rape and murder case were released before the completion of their five-year jail term and the court also quashed their remaining sentences.

Protest against the rape of an eight-year-old girl in Kathua. (File photo: Reuters)

Srinagar: The victim’s family has expressed concern after the Punjab and Haryana High Court quashed the remaining sentence of one of the police officers convicted of the rape and murder of an eight-year-old girl in Kathua in January 2018.

The victim’s family has expressed concern over the release of the convicted police officer before the completion of his jail term.

Let us tell you that in this case, a sub-inspector Anand Dutta was dismissed from service, blaming him for destruction of evidence.

Datta was the station in-charge of the concerned police station at the time of the incident. He was sentenced to five years rigorous imprisonment. Last month, the court quashed the remaining sentence of Dutta and ordered his release.

Dutta’s counsel had submitted before the court that the allegations leveled against his client were not substantiated.

Earlier, on 16 December 2021, the court had stayed the sentence of another policeman, Head Constable Tilak Raj, convicted in the case.

Three policemen, including Dutta and Raj, were found guilty of destruction of evidence and sentenced to five years in prison. Two of these policemen had served more than half their sentences.

The special court in Pathankot had sentenced three other accused Sanji Ram, Deepak Khajuria and Pravesh Kumar to life imprisonment.

The girl was kept unconscious continuously, strangled to death

It is noteworthy that the mutilated body of an eight-year-old girl was found on January 17, 2018, from the forest near the house of the main accused in the case, Sanji Ram. After widespread outrage and protests over the rape and murder incident, the then Chief Minister Mehbooba Mufti’s government handed over the investigation to the Crime Branch on the request of the victim’s family.

Two ministers in the then government, Chandraprakash Ganga and Chaudhary Lal Singh, had also participated in a rally taken out along with the family and relatives of the accused, demanding a CBI probe.

The Crime Branch, in its investigation, had said that in an attempt to create false evidence at the scene, the clothes of the minor girl were washed by the policemen before they were sent to the forensic science lab.

The crime branch’s fifteen-page chargesheet said, “The girl was fed narcotic substances, which were bought from a local shop. A few days before the girl was brutally strangled to death, she was kept hidden in a temple in Rasana.

According to the chargesheet, the accused repeatedly raped the girl while the local police officers probing the case destroyed the evidence.

“During investigation it was found that Sanji Ram was against the settlement of Bakarwals (shepherd community) in Rasana, Kuta and Dhamyal areas and used to repeatedly tell the people of his community that they should not give land for the Bakarwals to graze,” the chargesheet said. Nor help them in any way.

The Crime Branch had filed a charge sheet against eight people, including a juvenile. Following nationwide anger over the rape and murder of a girl inside a temple, the Supreme Court in 2018 had directed the case to be shifted out of Jammu and Kashmir.

The court had ordered the sessions court at Pathankot to hear the matter on a daily basis.

Pathankot District and Sessions Judge Tejwinder Singh, in his 432-page judgement, had termed the crime as “satanic and savage” and said that the crime was committed in the most shameful, inhuman and barbaric manner.

Now the family is upset, said – living in fear

Mir (name changed) had adopted this girl (victim) from his sister. At that time the child was only six months old.

mir ne the wire Told the police that the three accused policemen were to undergo a jail term of five years and also pay a fine of Rs 50,000.

Mir said, “It has been only two years and he was released before serving five years in jail. We had always demanded that all the culprits should be hanged.

Mir said, “These people (convicted policemen) are out now and we are feeling threatened again because they can do anything to us. The families are sad and disappointed as they are out of jail and we feel threatened again.

Another relative of the victim said, “We do not understand how the convicted policemen came out within two years instead of completing the five-year jail sentence given by the court.”

Advocate Mubeen Farooqui, appearing for the victim’s family in the Punjab and Haryana High Court, said that as per the chargesheet of the Crime Branch, the convicted policemen were found to be involved in a criminal conspiracy and they were also aware of this horrific crime before the rape and murder.

Advocate Farooqui the wire “An appeal has been filed in the Punjab and Haryana High Court seeking capital punishment on behalf of the family, which is currently pending but the guilty policemen were released before hearing of our appeal for capital punishment,” he told PTI.

Farooqui said, “If the appeal of the victim’s family had been heard before hearing the bail plea of ​​the convicts, then there was a possibility that the convicts could have got extended their jail term instead of getting bail like this.”

Soon after the court granted bail to convicted policemen in Punjab, the then Chief Minister Mehbooba Mufti had tweeted saying that the wheel of justice has completely collapsed.

He had tweeted and said, ‘Aggrieved that the policemen convicted of destroying evidence in the Kathua rape case have been granted bail and their jail term has been cancelled. When justice is not done in the case of rape and murder of a girl child, it becomes clear that the justice system has completely collapsed.

It is noteworthy that in January 2018, an eight-year-old girl was raped and murdered in Kathua district. A court in Pathankot, Punjab had given a verdict in this case on 10 June 2019. The case was transferred to Punjab on the orders of the Supreme Court.

The court had convicted six people including the main accused Sanji Ram in this case. Sanji Ram, sacked special police officers Deepak Khajuria and Parvesh Kumar were sentenced to life imprisonment, while three other sacked policemen—Anand Dutta, Tilakraj and Surendra Verma—were sentenced to five years for destruction of evidence. Was.