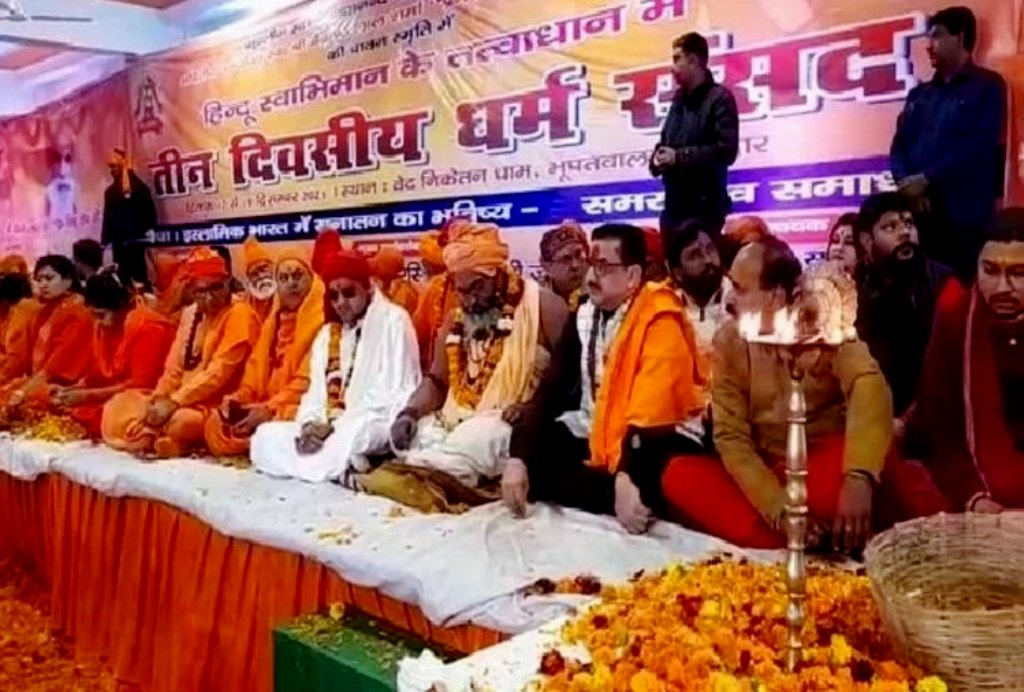 Uttarakhand Police said that a five-member special investigation team has been constituted to investigate the matter. He said that if strong evidence is found in the investigation, then there will be an arrest in the case. In Haridwar in the past, hate speeches were given against Muslims in a ‘Dharma Sansad’ and a call for their massacre was also given.

A ‘Dharma Sansad’ was organized by Hindutva leaders and fundamentalists in Haridwar, Uttarakhand between 17-19 December. (Photo Credits: Facebook)

Dehradun: The SIT was constituted on Sunday to probe the alleged hate speeches made by some Hindutva leaders during the recently held ‘Dharma Sansad’ in Haridwar city of Uttarakhand.

When asked whether some people related to this case would also be arrested, Nagnyal said that surely if the investigation gives solid evidence, then there will be arrest.

“We have formed the SIT. She will investigate. If strong evidence is found against those involved, then appropriate action will be taken.

He said that an FIR has been registered against five people in this case, including Waseem Rizvi, who took the name Jitendra Narayan Tyagi after converting to Hinduism last month, Sadhvi Annapurna, Dharmadas, Sagar Sindhuraj Maharaj and the organizer of Dharma Sansad and Radical Hindu religious leader Yeti Narasimhanand is the chief priest of Dasna temple in Ghaziabad.

Let us tell you that a ‘Dharma Sansad’ was organized by Hindutva leaders and fundamentalists in Haridwar, Uttarakhand between December 17-19, in which openly hate speeches were given against Muslims and minorities, even their massacre. was also called.

Earlier, the first FIR was registered in this regard on 23 December 2021, in which only Jitendra Narayan Singh Tyagi was named. Before leaving Islam and adopting Hinduism, Tyagi’s name was Wasim Rizvi.

Wasim Rizvi was the former chairman of the Uttar Pradesh Central Shia Waqf Board, which has recently changed its name claiming to convert to Hinduism.

Officials said that apart from section 153A (promoting enmity between different communities on grounds of religion, race, place of birth, residence, language) in the FIR, section 295 (causing damage to a place of worship or any holy object) of the Indian Penal Code was also added. Has been.

In this FIR, on December 25, the names of Swami Dharamdas and Sadhvi Annapurna alias Pooja Shakun Pandey, residents of Bihar, were added. Pooja Shakun Pandey is the Mahamandaleshwar of Niranjini Akhara and general secretary of Hindu Mahasabha.

However, in the Dharma Sansad of Haridwar, Narasimhanand made provocative statements against the Muslim society, saying, ‘When we needed help, the Hindu community did not help us, but if a young worker is ready to become a Hindu Prabhakaran, So before anyone else, I will give him Rs 1 crore. If he continues like this for a year, I will raise at least Rs 100 crore.

before this the wire had told in its detailed reports that in February 2020, due to the hate speech given by Narasimhanand, terrible riots broke out in North-East Delhi. Narasimhananda and his so-called disciples can be seen regularly delivering violent and provocative speeches against Muslims.

Several FIRs are registered against Narasimhanand in Uttar Pradesh and Delhi. Earlier this year, Delhi Police filed an FIR against him for his remarks about Prophet Muhammad during a press conference in Delhi.

It is known that 76 lawyers of the Supreme Court have written a letter to Chief Justice NV Ramana, seeking directions for strict action against those who made provocative statements against Muslim society in the recent programs held in Delhi and Haridwar.

Apart from this, in the past, former army chiefs, bureaucrats and many intellectuals of the country wrote letters to Prime Minister Narendra Modi and President Ram Nath Kovind, demanding to condemn the call for genocide of Muslims and take action against those who make such threats.

More than 200 people have signed this open letter written to Prime Minister Modi and the President.

Members of the Muslim community also took out marches in Dehradun and Haridwar on Friday, demanding the immediate arrest of those accused of giving hate speeches at the ‘Dharma Sansad’.

Booking of Hyundai IONIQ 5 electric car in India will start from 20 December.…