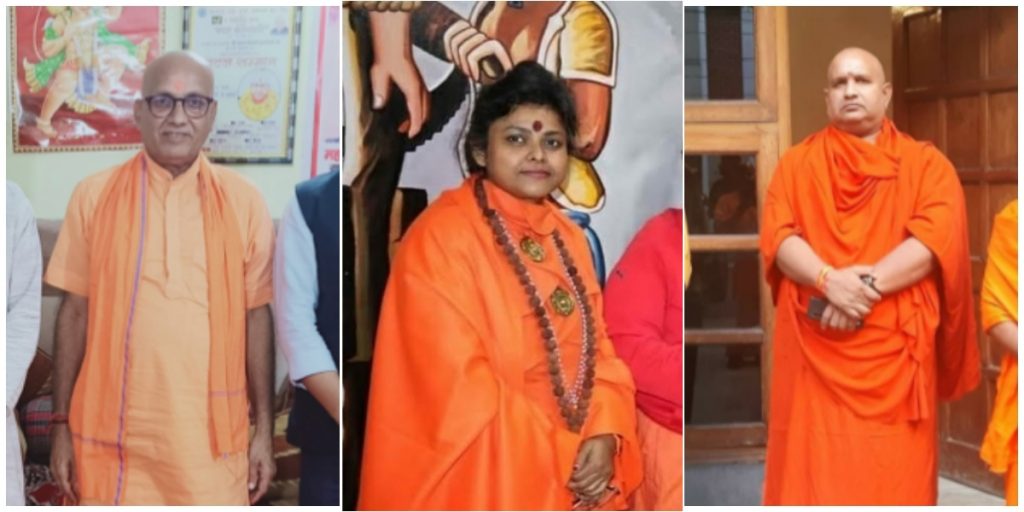 In a religious parliament held in Haridwar in the past, radical Hindutva leaders had spoken of ‘wiping out’ the Muslim society, using harshly derogatory words. So far the police has neither registered a case nor has any arrest been made in this regard.

New Delhi: A ‘Dharma Sansad’ was organized by Hindutva leaders and fundamentalists in Haridwar, Uttarakhand between 17-19 December, in which openly hate speeches were given against Muslims and minorities, even calling for their genocide. has also been done.

The event was also attended by BJP leader Ashwini Upadhyay, who was arrested sometime back for making provocative statements against Muslims at Jantar Mantar. BJP Mahila Morcha leader Udita Tyagi also participated in this controversial program, which shows that the ruling party is giving support to such people.

Surprisingly, even after such open statements, the police have neither registered a case nor arrested anyone.

In this program Swami Prabodhanand Giri, president of right-wing organization Hindu Raksha Sena based in Uttarakhand said, ‘We have to prepare. And I’ll tell you what needs to be done. This is the solution and this is the way for you. Hindus were driven away in Myanmar. The leaders, the government and the police were just standing and watching. They started killing them by slitting their throats and not only that, they started eating them by cutting them on the streets. The onlookers must have thought that we are going to die, we will not survive.

He further said, ‘This is our country now. You have seen this on Delhi border, they killed Hindus and hanged them. There is no more time, the condition is that either you prepare to die now, or get ready to kill, and there is no other way. So, like in Myanmar, the police here, the leaders here, the army and every Hindu must take up arms and we have to carry out this cleanliness drive. There is no other way than this.

Given Prabodhananda’s association with the BJP, such highly hateful rhetoric is quite worrying. On at least two occasions, Prabodhanand has shared his photographs with Uttar Pradesh Chief Minister Yogi Adityanath on social media. Not only Adityanath, Prabodhanand’s picture is also with Naresh Sharma, a former BJP leader from Haridwar, who later joined the Aam Aadmi Party.

Apart from this, on August 12, 2021, he was also photographed with Uttarakhand’s Higher Education Minister and BJP member Dhan Singh Rawat. In June 2021, he had posed for a photo giving a sword to Tirath Singh Rawat, former Chief Minister of Uttarakhand and BJP leader.

This is not the first time that Prabodhanand has made any anti-Muslim remarks. In the year 2017, he had said that Hindus should produce eight children, so that they can save their society. After this, in the year 2018 in Shamli, he had said that only Muslims rape Hindu women. Along with this, he made controversial remarks about the so-called ‘love jihad’.

In a video made public in June this year, he also made statements about the massacre with Hindutva fanatic Yeti Narasimhananda Saraswati.

In that video he says, ‘If we want humanity to survive in the whole world, then we have to clean these jihadis. Jihadis should be treated. A few days ago someone said that in Islam rapists are born, jihadists are born – I have been saying this for a long time, in every Islamic household there is a jihadi and a terrorist. Hindu society needs to stand up and treat it. Otherwise these jihadis will find a cure for Hindus and we will have no place to live on this earth.

In the recently concluded Dharma Sansad in Haridwar, Mahamandaleshwar of Niranjani Akhara and General Secretary of Hindu Mahasabha Sadhvi Annapurna alias Pooja Shakun Pandey also called for taking up arms and massacre. He clearly said that Muslims will have to be mass murdered.

He said, ‘Nothing is possible without weapons. If you want to kill their population, kill them. Be ready to kill and be ready to go to jail. If even 100 of us are ready to kill 20 lakhs (Muslims), we will emerge victorious and go to jail. like [नाथूराम] Godse, I am ready to be defamed, but I will take up arms to protect Hindutva.

He also said, ‘Today women need to carry a cylinder in one hand and a sword in the other. I request my mothers not to become their sons’ weakness, but to be their strength. Tell them that if wrongdoing is happening somewhere, then I will come with you to cut them. There will be no case but there will be only slight discomfort for a few days. Call us, we will be with you.’

However, along with this, he also said that ‘people like Modi and Modi’ have told in the past what Godse and Gandhi were. Pandey is a prominent leader of the Hindu Mahasabha and often makes headlines for hate speech against Muslims.

Recently he made headlines for his remarks against Modi, when he announced that the central government would repeal three agriculture laws in the wake of a year-long protest by farmers on Delhi’s borders.

Swami Anandaswarup, the third religious leader whose hate speeches and incitement to violence the wire Has reported earlier also, has also been seen giving statements of the Dharma Sansad massacre.

He said, ‘The decision of this Parliament of Religions will be the word of God and the government will have to listen to it. If this does not happen, then we will wage a war which will be even worse than the revolt of 1857.

He explained through personal examples how Hindus should treat Muslim street vendors.

Anandswaroop said, ‘Every morning in the street where I live, I used to see a mullah (a derogatory term for a Muslim) with a big beard and nowadays he wears a saffron beard. This is Haridwar sir. There is no Muslim buyer here, so throw him out.’

Swami Anandswaroop had earlier supported BJP MLA Ajendra Ajay’s campaign against the so-called ‘land jihad’ in Uttarakhand. Earlier this year, he had demanded a ban on entry of non-Hindus into Uttarakhand.

when the wire asked BJP MLA Ajendra Ajay if he agreed with Anandswaroop’s view that non-Hindus should be restricted to own land rights in Uttarakhand, he said, “I agree with him to a large extent.” There are two reasons. First, it is a question of national security because we are a border state. Second, Uttarakhand is sacred to Hindus and why can’t there be special holy places for Hindus?’