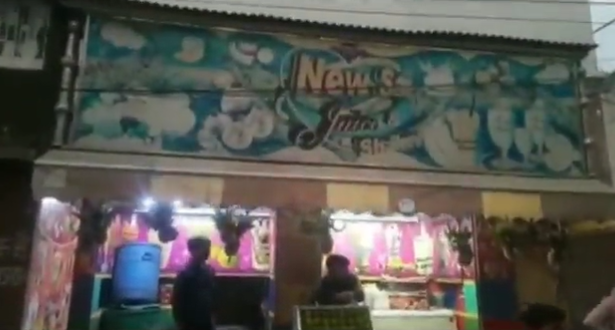 The incident is from Moradabad, where on the evening of 23 December, Bajrang Dal activists alleged that Muslim men in the area were running a shop in the name of a Hindu. During this, the workers also created a ruckus while closing a juice center and raised slogans of ‘Har Har Mahadev’, ‘Jai Shri Ram’.

New Delhi: In Moradabad, Uttar Pradesh, Bajrang Dal activists allegedly shut down the shop of a Muslim man on the evening of 23 December.

Times of India journalist Kanwardeep Singh video of this incident of juice shop Tweet has done.

According to the report, a Muslim man named Shabu Khan was running a juice center here for the last 10 to 12 years. The name of this shop was ‘New Sai Juice Center’.

Khan told that being a Muslim, he was forced to close the shop. It has been told that a Bajrang Dal worker named Navneet Sharma has closed this shop.

Sharma told that the Muslim shopkeeper was running a juice center in the Hindu area and was cheating the Hindus.

They allege that Salman, an employee of the same shop, is in jail under the POCSO Act for harassing a Hindu girl two months ago.

although, the wire It has not been confirmed whether this allegation is true or not.

Bajrang Dal worker alleges that ‘love jihad’ is being carried out in Hindu area under the guise of juice center.

Let us tell you that ‘Love Jihad’ is a term used by Hinduist organizations, in which Hindu women are allegedly forced or coerced to convert to Islam and marry a Muslim man.

Bajrang Dal activists have reportedly launched a campaign claiming that Muslim people are running their shops under Hindu names. Bajrang Dal workers have threatened the rest of the Muslim shopkeepers that if they do not close their shops, then a big agitation will be started.

A group of right activists forcefully closed the stall of a Muslim juice seller alleging that it has become a centre of ‘love jihad’ activities. This man is running the stall for nearly 15-yrs in Majhola area of UP’s Moradabad. @Uppolice are yet to provide him proper protection. pic.twitter.com/Lu1A6pandz

While registering a case under relevant sections at Majhola police station on Friday, Moradabad police said that other legal proceedings are going on.

However, the police’s tweets do not indicate against whom the case has been registered and who is the accused in the FIR.