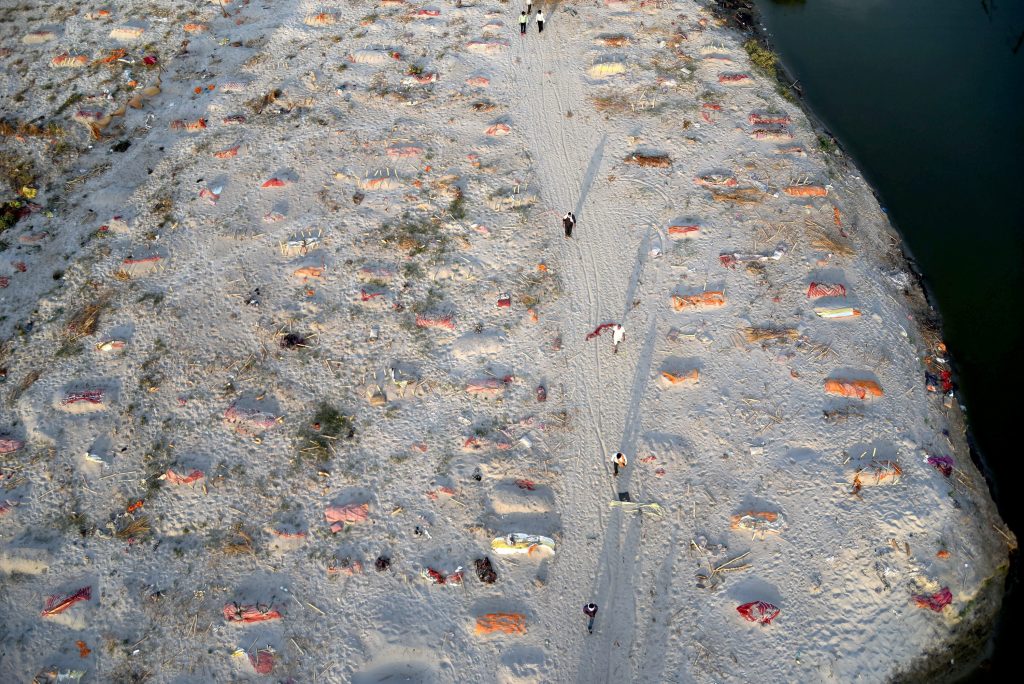 A book written by Rajiv Ranjan Mishra, Director General, National Mission for Clean Ganga, explains the horrific impact of the pandemic on the Ganga. He said that it appears that the works which were done in the last five years to save the river are being destroyed. On the news of dead bodies being found during the second wave of COVID-19, it was said by the UP government that in some areas of the state there has been a tradition to flow dead bodies into the Ganges.

Dead bodies buried at a Ganga Ghat in Allahabad in May 2021 during the second wave of Corona. (Photo: PTI)

New Delhi: A book written by Rajiv Ranjan Mishra, Director General, National Mission for Clean Ganga (NMCG), has confirmed that bodies were dumped in the Ganges river during the dreaded second wave of the coronavirus pandemic.

Ganga: Reimagining, Rejuvenating, Reconnecting The book titled is co-authored by Puskal Upadhyay, an IDAS officer and worked in NMCG.

Rajeev Ranjan Mishra is a 1987-batch Telangana-cadre IAS officer and has served in various positions in the National Mission for Clean Ganga for over five years during his two terms. He is due to retire on December 31, 2021.

His book was launched on Thursday by Vivek Debroy, chairman of the Economic Advisory Council to the Prime Minister.

According to the Indian Express, in one of its chapters ‘Floating Corpses: A River Defiled’, he has explained the horrific impact of the pandemic on the Ganges. He said that it appears that the works which were done in the last five years to save the river are being destroyed.

A top official of the Ganga Mission said that during the Corona epidemic, when the number of deaths started increasing manifold and the crematoriums started getting crowded, the Ganga Ghats of Uttar Pradesh and Bihar had become an easy way to throw the dead bodies into the river. .

However, at the same time, he also said that the data provided by the district administrations shows that “around 300 bodies” were dumped in the river and not more than 1000, as reported in the reports.

Mishra wrote in the book, ‘I was battling COVID-19 disease at Medanta Hospital in Gurgaon when I heard the news of decomposed bodies floating in the holy Ganges in early May.’

He further said, ‘Television channels, magazines, newspapers and social media sites were filled with horrific pictures and stories of bodies being thrown into the river. It was a painful and heartbreaking experience for me.

He said, ‘My job as the Director General of the Ganga Mission is to be the custodian of the health of the Ganga, to rejuvenate its flow, to ensure it returns to its pristine purity and to its tributaries after years of neglect. All this has to be ensured too.

On May 11, when the second wave was at its peak, the Ganga Mission led by Mishra had asked all 59 district Ganga committees to take “necessary action” on the issue of dead bodies floating in the Ganges and submit its report.

After this, the organization had asked UP and Bihar to give a detailed report on this, after which Uttar Pradesh started reporting such cases district-wise.

Later, a senior UP official told central officials in a meeting that the practice of dumping dead bodies in rivers was prevalent in the central and eastern regions of the state.

Poor covid management in all the coastal states along the banks of the Ganges has been highlighted in Kitan.

“Due to poor management of funeral services, people took advantage of the situation to throw bodies into the river and adverse media publicity added to our restlessness and helplessness,” it said.

It is said in the book that the uneasiness of the Ganga Mission had increased because they did not have the power to take action on such matters.

The book on the tradition of burial of dead on the banks of rivers by some communities in UP states that the incident of floating dead bodies or burial of dead bodies was not new to the people living near the river. However, their pictures had increased the magnitude of the crisis.

In May last, after the matter of shedding dead bodies in the Ganges river, it was said by the Uttar Pradesh government that in some areas of the state there has been a tradition to flow dead bodies into the Ganges.

It was told by the government that there is a practice of shedding dead bodies in rivers in two special areas of eastern and central UP and its center is Kanpur-Unnao region in central UP and Banaras-Ghazipur region in eastern UP.

Let us inform that in the month of May, a large number of bodies of suspected corona infected were found floating in the Ganges and its tributaries in Bihar and Uttar Pradesh. On May 10, 71 dead bodies were retrieved from the Ganges river near Chausa in Buxar district in Bihar, bordering Uttar Pradesh.

Apart from this, it was told in many media reports that in different districts of Uttar Pradesh, more than 2000 bodies were buried half-heartedly or hastily or found on the banks of the Ganges.

According to a report in Dainik Bhaskar, in the second week of May alone, more than 900 bodies were buried on the banks of the river in Unnao alone. He gave this number as 350 in Kannauj, 400 in Kanpur, 280 in Ghazipur. He told that the number of such dead bodies was increasing continuously in various districts of central and eastern Uttar Pradesh.

On these reports, an official of the Rashtriya Swayamsevak Sangh (RSS) had said that a special agenda has been run in the media regarding the burial of dead bodies on the banks of river Ganga or photographs of bodies floating in the river Ganga.

breaking news breaking news in hindi headlines in hindi Hindi news india news latest news in hindi live news news in hindi not news The Wire the wire in hindi thewire no
Share. Facebook Twitter Pinterest LinkedIn Tumblr Email
Previous ArticleSara Ali Khan reached Ujjain’s Mahakal temple, prayed for the success of ‘Atrangi Re’
Next Article Mob lynching in the name of sacrilege: If religious fanaticism becomes uncontrollable, then there is no limit to the decline