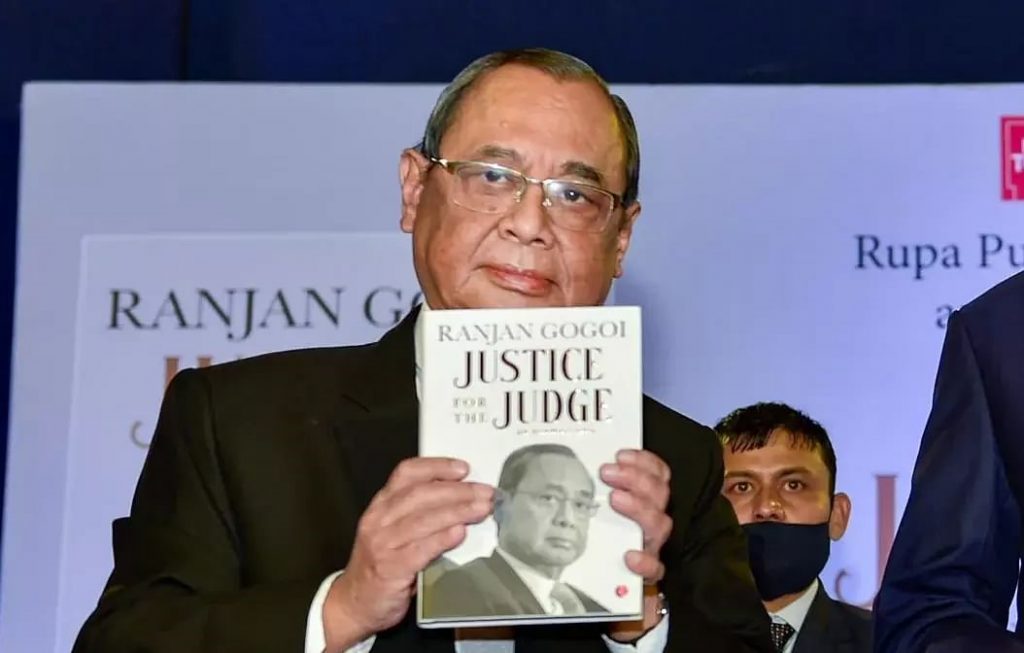 There were three crimes during Justice Ranjan Gogoi’s tenure as CJI. After retiring, he also added a fourth to it. The purpose of his book, which came out recently, is to defend all these, but in every case it has proved to be bad.

Former CJI and Rajya Sabha MP Ranjan Gogoi at the launch of his book. (Photo: PTI)

Ranjan Gogoi was a bad Chief Justice of India and his recently published autobiography – aimed at defending his controversial tenure – shows how bad a lawyer he is, even when he has to defend himself. This notion is further strengthened by the series of interviews given by him.

There were three crimes during Gogoi’s tenure as Chief Justice.

The first was the misuse of the power of the master of roster to divert important cases, fast-track some cases, and assign politically sensitive matters to their elected judges.

The second was the highly controversial judgments delivered by him as the head of various benches – from the most important cases like Ayodhya and Rafale to the freedom of expression petition of Abhijit Iyer Mitra, who was arrested by the Odisha Police for a joke, Like other cases included. His stand on the National Register of Citizens (NRC) and India’s obligations towards the rights of refugees and international law also fall in this category.

His treatment of sexual harassment allegations leveled against him by a former female employee of the Supreme Court was the third sin.

After retirement, Gogoi put another stain on his side: he accepted the government’s gift of nomination to the Rajya Sabha within a few weeks of leaving office. Just one precedent for a former Chief Justice to accept such a gift from the government comes when Ranganath Mishra accepted his nomination to the Rajya Sabha six years after retiring from office.

Mishra was rewarded for covering up the official investigation into the 1984 anti-Sikh riots. In his book, Gogoi has shown wisdom and has not cited this shameful precedent. It is perhaps no surprise that nothing remarkable has happened in his career as an MP so far.

Even his presence in the House has been very less. He has been given a breach of privilege notice due to his statement that he attends Parliament session only when ‘he has a mind’.

In his book, Gogoi has little to say on the Ayodhya and Rafale verdicts except to hide under the guise of the fact that other judges on the bench also agreed. Although, in general, a judge is not expected to pen the defense of his judgments, Gogoi is silent about the factual errors in the Rafale verdict.

On Ayodhya – this is not the place to go into this horribly flawed judgment that actually allowed those who destroyed the Babri Masjid in 1992 to be rewarded for this crime – Gogoi has no valid answer to this question That is why the Ayodhya land ownership case was so important that it needed to be fast-tracked even before the criminal trial related to this case was completed, that too with serious implications for India’s democracy. The Supreme Court did not have time for many very important constitutional issues (for example, the issue of electoral bonds, or law-administration and federalism (Article 370)).

Gogoi, giving further exposure to his thoughtless insensitivity, has also published a picture of the Ayodhya verdict bench enjoying wine and dinner at the hotel in the book and captioned it as ‘celebrating the historic verdict’. A bench headed by CJI Gogoi at Hotel Taj Mansingh after the Ayodhya verdict on November 9, 2019. (Credits: Justice for Judges / Roopa Publications)

These words belong only to him – not to his fellow judges – but the fact that the Chief Justice of India can ‘celebrate’ the conclusion of a highly disputed case – and can even announce it publicly – is in itself Suffice it to show how incompetent he was to decide the matter.

Habeas Corpus cases stemming from the illegal detention of the entire democratic leadership of the former state, as well as its failure to give prominence to the matter relating to the abrogation of Jammu and Kashmir’s autonomy and abolition of statehood He has defended the method of settlement with very weak arguments.

The truth is quite the opposite and they do not make any effort to answer the question, why was the hearing of the very important issue of electoral bonds related to the question of conducting free and fair elections in India not started?

But what is undoubtedly the most shameless part of the book is the way in which he tries to explain his efforts to deal with the allegations of sexual harassment leveled against him by a former woman employee of the Supreme Court.

Bowing to the unanimous opinion of people with little understanding of law and morality, Gogoi admits that he should not have tried to become a judge in this case as well. But this acknowledgment has also been made in a half-hearted and insidious way: ‘My presence in the back, which I now think could have been avoided, was an expression of a momentary anger stemming from an allegation beyond belief and understanding. ‘

Gogoi reiterates the claim that the woman employee was dismissed after unilateral departmental proceedings with reference to certain allegations, and this was in no way connected with the allegations leveled by her.

His claim could have been sound if he had been able to present any information that the dismissal on account of these ‘special charges’ is not unusual according to the Supreme Court. They could perhaps also answer the ‘coincidental’ fact that the woman was subsequently arrested on false criminal charges and both her husband and brother-in-law were suspended from their police jobs, which It was clearly an act of retaliation and the possibility of their hand being behind it cannot be ruled out.

In an interview to India Today, Gogoi wants to take the cover of the fact that he was not given a ‘clean chit’ in the decision taken that day, admitting that it was ‘probably’ a mistake to join the bench. But here Gogoi is factually wrong.

“After considering the matter, we are not passing any judicial order at present and leaving it to the discretion of the media to act with the responsibility expected of them by showing restraint and accordingly decide whether What should be published and what should not be published, because baseless and defamatory allegations not only tarnish the image of the judiciary and damage it to an irreparable extent but also snatch away its independence. So for the time being we leave it to the media not to print unwanted content.

The subject of the suo motu hearing held by Gogoi on that day and the reason therefor was the allegations leveled against Gogoi, therefore, without going into the facts of the case by a bench constituted by the Master of Roster, terming the allegations (baseless and defamatory) and terming it as ‘ Isn’t that in itself a ‘clean chit’, calling it ‘undermining the credibility of the judiciary’ and calling it ‘non-compensated damage’ and ‘taking away its independence’?

The worst part of his explanation of his behavior in this case is that he cites the former life of the accuser, pointing out that the allegation is aimed at “defaming the employee by some people forward”. It was the result of a conspiracy.

his book the wire It also tries to use this news report published by the company that the employee and her family were likely targets of Pegasus spyware. The report said that at least nine phone numbers used by the woman and her family members were in the leaked database.

‘This espionage allegedly took place after the accused filed his affidavit on April 19, 2019.’ To this he adds, ‘All his main allegations, which were not believed, predate the alleged espionage.’ That is, they want to say in a way that there was no reason for anyone to spy on them after this.

In fact, there are many reasons why the woman has filed an affidavit and has chosen to spy on her family and none of these are enough to praise Gogoi and his leadership of the Supreme Court.

Gogoi is troubled by the ulterior gesture—though he does not specify who did—that the information gathered may have been provided and used by the Bobde committee that probed allegations of sexual harassment against him. He warns the irritating power from the independent media in a scathing manner,

“I think the time has come for the right minded majority to raise their voice. They can no longer play the flute in their comfortable world by cloaking issues and avoiding conflicts and can no longer be content with the thought that misfortune has spared them. Because if not controlled then this demon can swallow them tomorrow too.

As Chief Justice, Gogoi did little to strengthen justice and the Constitution. As an MP, he wants powers to counter the ‘demon’ that still holds constitutional values ​​to his chest.