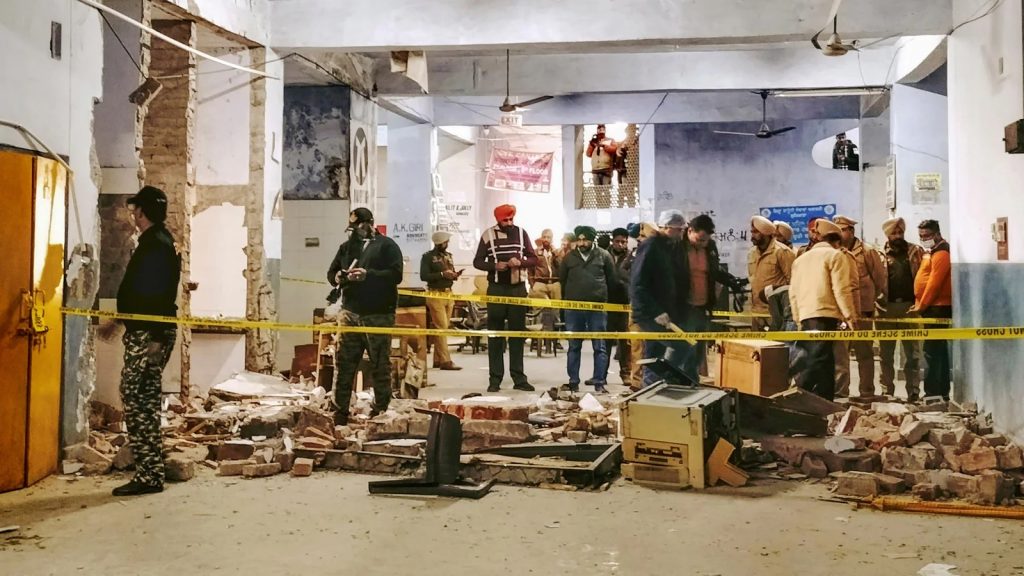 Condemning the blast, Punjab Chief Minister Charanjit Singh Channi said that as elections are approaching, some anti-national and anti-state forces are trying to carry out such heinous acts.

Ludhiana/New Delhi : One person was killed and five others were injured in an explosion in the district court premises in Punjab’s Ludhiana on Thursday. police gave this information.

Police said the blast took place in the toilet on the second floor of the court complex. At that time the district court proceedings were going on.

The explosion was so powerful that a wall of the campus was damaged and some vehicles parked in the premises were also damaged.

Earlier, the police had claimed that two people had died in the blast, but later it was told that one person had died.

The Union Home Ministry has sought a detailed report on the blast in the district court complex. In a letter, the ministry asked the Punjab government to send the report at the earliest, giving details of the incident.

According to officials, the ministry has asked the state government to inform about the findings of the preliminary investigation and also who could possibly be involved in the blast.

Condemning the blast, Punjab Chief Minister Charanjit Singh Channi said he would visit Ludhiana to take stock of the situation.

Channi told reporters in Chandigarh, ‘There has been an explosion in Ludhiana. I am going straight to Ludhiana only.

“As the (assembly) elections are approaching, some anti-national and anti-state forces are trying to carry out such heinous acts. The government is alert about this and people should also be alert.

Channi said that the culprits will not be spared.

Ludhiana Police Commissioner Gurpreet Singh Bhullar said the area has been sealed and the forensic team will collect samples from the site for the blast investigation.

According to the Indian Express report, in response to a question related to the preliminary investigation, Bhullar said, ‘The source of the explosion is not clear yet. A body has been recovered. The man was either carrying explosives or was very close to him. We are waiting for the arrival of the NSG team from Delhi. Five people injured in the accident are out of danger.

After the incident, the government offices located in the district administrative complex of Ludhiana and the adjoining district commissioner’s office complex (mini secretariat) have been evacuated as a precautionary measure.

Former Punjab Chief Minister Amarinder Singh said that he was saddened to learn about the casualties in the incident.

Singh said in a tweet, ‘Disturbing news of blast in Ludhiana court complex. Sad to know about the casualties. I pray for the speedy recovery of the injured. Punjab Police should get to the bottom of it.

“Shocked by the news of the blast in the district court of Ludhiana, in which some people have been injured,” he said. May Guru Sahib grant peace to the departed souls and speedy recovery of the injured. The Punjab government should focus on law and order rather than political vendetta to ensure peace and communal harmony in the state.

Kejriwal said in a tweet, ‘First sacrilege, now blast. Some people want to disturb the peace of Punjab. Three crore people of Punjab will not allow their conspiracies to succeed.

Some people want to spoil the atmosphere of Punjab. But the people of Punjab will not allow his dirty plans to succeed. https://t.co/wz5QN1pvhL pic.twitter.com/E7z8EyPSNq

Former Congress President Rahul Gandhi condemned the blast and said that strict action should be taken against the culprits soon.

He tweeted, ‘Blast in Ludhiana is very condemnable. My condolences to the families of those killed in this and wish the injured a speedy recovery.

The blast in Ludhiana is extremely condemnable.

My condolences to the families of those who’ve lost their lives and prayers of quick recovery for the injured.

Strict action must be taken at the earliest against those guilty.

According to the Indian Express report, the last bomb blast in Ludhiana took place on 14 October 2007 at Shingar Cinema Hall, in which six people were killed and 37 people were injured. Four alleged militants of Babbar Khalsa International are accused of carrying out the blasts.

In this case, on 16 December 2014, a Ludhiana court acquitted Gurpreet Singh Khalsa, Harminder Singh and Ravinder Singh alias Rinku for lack of evidence. The fourth accused, Sandeep Singh alias Harry, was found dead in Nabha jail in April 2011. The government’s appeal against the acquittal of the accused is still pending in the court.

Seven people were killed and 25 were injured in a bomb blast in Maur (Bathinda) on January 31, ahead of the 2017 Punjab Assembly elections.