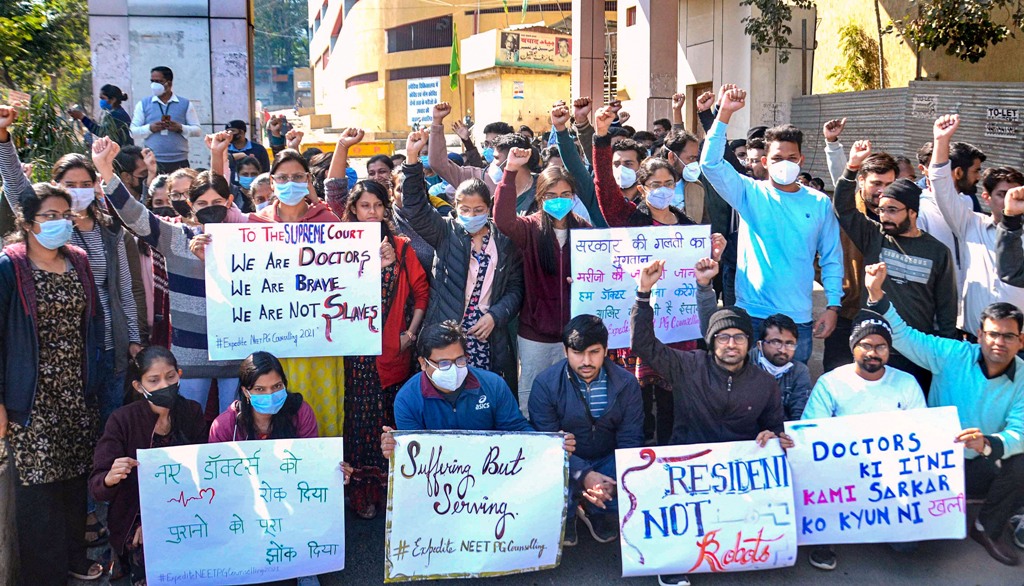 The protest gradually intensified with doctors boycotting even emergency operations, after which the strike was called off for a week at the request of the government.

News agency ANI According to reports, in Rajasthan too, doctors protested on Tuesday over the delay in NEET-PG counseling. Dr. Amit Yadav, who was involved in the protest, said that we have been demanding for the last 1 month that the counseling of NEET 2021 should be done but the government is not doing anything. Will boycott services for 2 hours today.

The strike was resumed on December 17 after FORDA members withdrew from all services.

Earlier on Monday (December 27), the resident doctors, intensifying their agitation, symbolically ‘returned their lab coats’ and took out a march on the streets.

Federation of Resident Doctors Association has been protesting for the past several days. Association president Manish claimed that a large number of resident doctors of major hospitals on Monday symbolically returned their apron (lab coat) in protest.

“We also tried to march from the Maulana Azad Medical College (MAMC) campus to the Supreme Court, but as soon as we started it, the security personnel stopped us from moving forward,” he said.

The association posted pictures of the scuffle between policemen and protesters in its Twitter handle.

According to a statement issued by Ford, this is a dark day in the history of the people of the medical profession. It alleges, ‘The resident doctors, so-called corona warriors, are protesting peacefully demanding to expedite the process of NEET PG counseling 2021, but they were badly beaten up, and the police detained them.’

“From today (December 27), all medical facilities will be completely closed,” the statement said.

In an official statement issued later, Additional Deputy Commissioner of Police, Central Delhi Rohit Meena said on Monday that “Without permission, a group of resident doctors blocked the BSZ road (the main road from ITO to Delhi Gate) and remained there for over six hours.” It was jammed for a long time too.

In the statement, he claimed, “They deliberately created a ruckus on the main road and blocked both the lanes, causing inconvenience to the general public.”

According to the statement, a senior police officer said that the Director General of the Health Department spoke to them and assured to fulfill their demands.

They claimed that despite persuading them, they became aggressive and blocked the road. He alleged that seven policemen were injured and the glass of the police bus was broken in the clash between the police and the doctors.

Delhi Police said that an FIR has been registered under section 188 and other sections for obstructing the duty of policemen and causing damage to public property during the protest.

Police said that a large number of resident doctors gathered in front of Sarojini Nagar police station late in the night, but no one has been taken into custody.

On the other hand, doctors claim that when they tried to take out a march from Safdarjung Hospital to the official residence of Union Health Minister Mansukh Mandaviya, the police detained a large number of protesters.