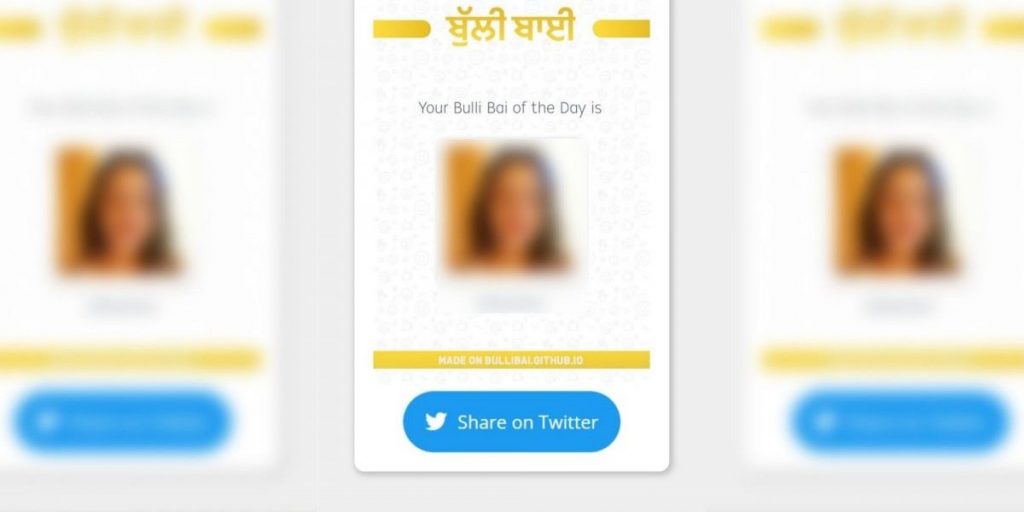 In July last year, pictures of Muslim women were posted for ‘online auction’ on an app called Sully Deals. Separate FIRs were registered in this regard by Delhi and Noida Police. However, till now no significant action has been taken against those responsible for it. A case has also been registered in the ‘Bully Bai’ portal case.

New Delhi: The issue of posting derogatory and manipulative pictures of Muslim women on the Internet has come to the fore once again. This is the second time in less than a year that a Muslim woman has been subjected to such atrocities by trolls.

In July last year, some unidentified people uploaded pictures of hundreds of Muslim women on an app called Sulli Deals. On the same lines, this time an online portal named ‘Bullibai’ (bullibai.github.io) has
Organized an ‘auction’ (using the derogatory word ‘Bulli’) using manipulated images of these Muslim women without their consent with the sole intention of disrespecting these women.

Many women have told that their pictures are being used on this platform. in these the wire Key journalist Ismat Ara, who also shared a screenshot of this website on Twitter, in which she has been described as the ‘Bully by the Day’.

It is very sad that as a Muslim woman you have to start your new year with this sense of fear & disgust. Of course it goes without saying that I am not the only one being targeted in this new version of #sullideals. Screenshot sent by a friend this morning.

Ismat filed a complaint with the Cyber ​​Crime Cell of Delhi Police and filed a complaint against IPC sections 153A (promoting enmity between different groups in the name of religion), 153B (speech or stigmatization prejudicial to national unity), 354A (sexual harassment), u/s 506 (criminal intimidation), 509 (saying or making any gesture with intent to outrage the modesty of a woman) and sections 66 (sending insensitive information by means of electronic communication) and 67 (sending obscene messages) of the IT Act Demand to register FIR.

He has said in his complaint that the word ‘bully of the day’ has been done with the intention of objectifying and undermining women. He has also requested the police to investigate the conspiracy regarding this website.

Ismat has said in her complaint, ‘Social media being a platform for public expression, cannot be used by the anti-feminist sections of the society to humiliate and humiliate women, especially Muslim women.’

He further said in the complaint, ‘It is really disappointing to see that these people spreading hatred are targeting Muslim women without any fear and they are not being punished either.’

There are many Muslim names,including mine,in the obnoxious #BulliDeals , same as #SulliDeals
Even Najeeb’s mother has not been spared. It’s a reflection on India’s broken justice system, a dilapidated law n order arrangement. Are we becoming the most unsafe country for women?

Many other Muslim women outspoken on social media have also found their pictures on this website. Photos of missing JNU student Najeeb’s mother are also on this site.

A day after Ismat’s complaint, the Delhi Police said that it has handed over the investigation of the case to the Superintendent of Police Manzoor Alam by registering an FIR under sections 153A, 153B, 354A and 509 of the IPC at the Cyber ​​Police Station in southeast Delhi.

UPDATE: An FIR has been registered by Cyber Police (South East Delhi) on the basis of my complaint with IPC sections 153A (Promoting enmity on grounds of religion etc), 153B (Imputations prejudicial to national-integration), 354A & 509 for sexual harassment. #BulliDeals pic.twitter.com/dJ1mspyiGI

Meanwhile, the Cyber ​​Crime Division of Mumbai Police has told news agency PTI that it has started an investigation into the platform, which has since been removed.

At the same time, on Saturday (January 1), IT Minister Ashwini Vaishnav tweeted and said, ‘GitHub has informed that the user responsible for hosting this site has been blocked.’

Shiv Sena MP Priyanka Chaturvedi said, ‘It is not enough to remove the app by GitHub. The culprits should be punished.

Sir,Thank you.With due respect I had shared with you that besides blocking the platform punishing the offenders creating such sites is important.I hope @HMOIndia & @GoI_MeitY will support @MumbaiPolice to find these culprits&make them as well as platforms accountable #BulliDeals https://t.co/o1wXAnJVYq

However, many political leaders have raised their voice regarding this matter and demanded immediate action against the accused.

Earlier, Shiv Sena MP Priyanka Chaturvedi said on Saturday that photographs of hundreds of Muslim women have been uploaded on an app using hosting platform GitHub.

Chaturvedi had said that he has taken up the matter with the Mumbai Police and demanded that the culprits should be arrested at the earliest.

Sir,Thank you.With due respect I had shared with you that besides blocking the platform punishing the offenders creating such sites is important.I hope @HMOIndia & @GoI_MeitY will support @MumbaiPolice to find these culprits&make them as well as platforms accountable #BulliDeals https://t.co/o1wXAnJVYq

He had said, ‘I have requested the Minister of Information Technology Hon’ble Ashwini Vaishnav ji several times to take strict action against those who are targeting women through platforms like SulliDeals. It is a shame that it is being ignored.

Reacting to the development, Mumbai Police said that it has taken cognizance of the matter and the concerned authorities have been asked to take action. An official said that the Mumbai Cyber ​​Police has started investigation in relation to the objectionable material.