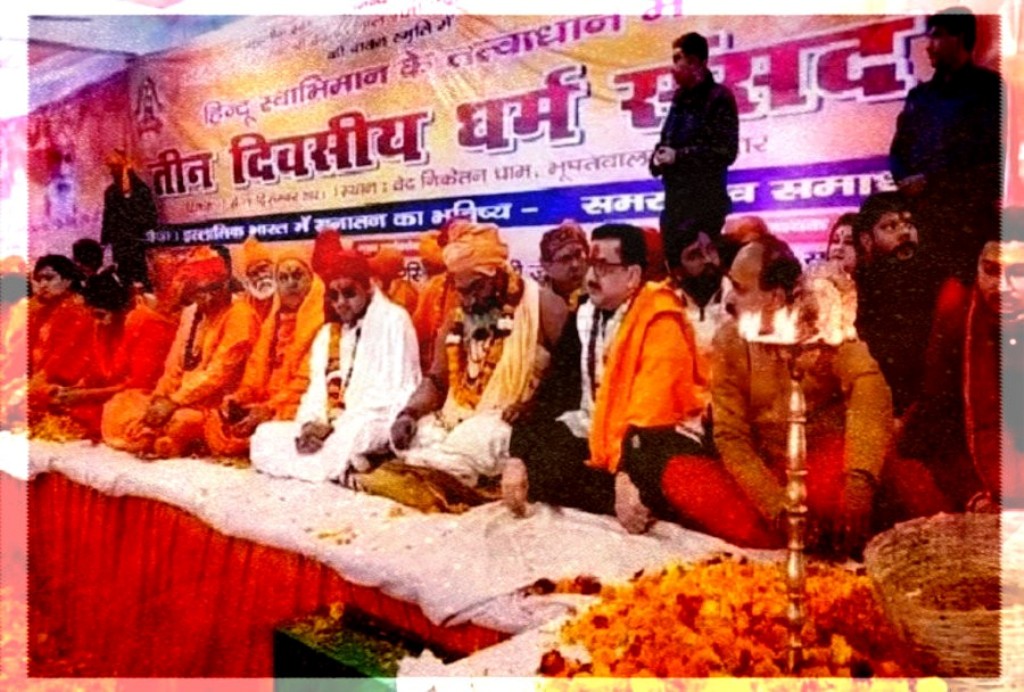 In the ‘Dharma Sansad’ held in Haridwar in December last, apart from making hate statements against Muslims, he had called for their massacre. In this case, a SIT investigation has been ordered by registering an FIR against many others including the radical Hindutva leader Yeti Narasimhanand. Meanwhile, a demand has been made to ban the proposed ‘Dharma Sansad’ in Aligarh, UP.

A ‘Dharma Sansad’ was organized by Hindutva leaders and fundamentalists from 17-19 December 2021 in Haridwar, Uttarakhand. (Photo Credits: Facebook)

Dehradun/Aligarh: In the month of December last, in the ‘Dharma Sansad’ organized by hardline Hindutva organizations in Haridwar city of Uttarakhand, apart from making hate statements against Muslims, they had called for massacre.

In this regard, Haridwar Police of Uttarakhand had registered a case and SIT has been constituted to investigate the matter. In protest against this investigation and FIR, the organizers of ‘Dharma Sansad’ have announced to organize a ‘Pratikara Sabha’ on January 16.

Meanwhile, the issue of ‘Dharma Sansad’ proposed on January 22 in Aligarh district of Uttar Pradesh is heating up and some local citizens have demanded the government to ban its event.

The organizers of Haridwar Dharma Sansad have alleged that the FIR was registered against them because the Uttarakhand government is scared of ‘jihadis’.

This ‘Dharma Sansad’ was organized by Hindutva leaders and fundamentalists in Haridwar, Uttarakhand from 17-19 December 2021, in which openly hate speeches were given against Muslims and minorities, even calling for their genocide. was also done.

Yeti Narasimhanand, one of the organizers of the event, made provocative statements against the Muslim society and said that he would give one crore rupees to the person who became ‘Hindu Prabhakaran’.

The first FIR was registered in this regard on 23 December 2021 after the controversy over the video of the event went viral, in which only Jitendra Narayan Singh Tyagi was named. Before leaving Islam and adopting Hinduism, Tyagi’s name was Wasim Rizvi.

On January 2, the state’s Director General of Police had also constituted a Special Investigation Team (SIT) to probe the matter. After that, on January 3, a second FIR was registered against 10 people in connection with the Parliament of Religions.

According to the Indian Express, no one has been arrested in connection with these cases so far.

Sadhvi Annapurna alias Pooja Shakun Pandey, one of those named in the first and second FIRs, said, “We have called upon all Hindus and saints to attend the meeting on January 16. We had organized Dharma Sansad to work for our self-defense.

He further said, ‘Not only in Haridwar, but there is a crowd all over India. They keep threatening us and Hindus. They are demanding our arrest and hanging. ‘Pratikkar Sabha’ is a protest against the FIR registered against us. The Uttarakhand government is working under pressure. They are biased. There was no need for FIR and SIT, as we are terrorists.

Pandey said that the protest meeting will be organized at Bairagi Camp in Haridwar. “Our core committee of 21 people, who participated in the Parliament of Religions in December, are expected to be present in this meeting,” he said.

Sagar Sindhuraj Maharaj, who runs Shri Krishna Pranami Kalyan Ashram in Devprayag (Tehri Garhwal district) and Roorkee and named in both the FIRs, alleged that the Uttarakhand government was acting under pressure.

He said, ‘This meeting will be in the form of a huge rally in Haridwar. This is against the work done by Uttarakhand and other governments under the terror of jihadis. They are regularly registering FIRs against saints.

He further said, ‘They formed the SIT against us without any reason. However, they did not take any action on our complaint against Quran and Muslims for spreading Jihad. The Uttarakhand government and the chief minister (Pushkar Singh Dhami) are scared of jihadis.

When asked about the FIR against him in Haridwar, he said that he has not been given any information or notice regarding the registration of the case.

He said, ‘I am not even aware of the case registered against me. No one has informed me about the FIR or given any notice from either the police or the administration. This information has come to me only through the media.

Regarding organizing the protest meeting, DIG Haridwar Yogendra Singh Rawat said that he has not been informed about the program of January 16 till now.

Rawat said, ‘I came to know about it through the media. If they follow all the COVID-19 guidelines, then they do not need prior permission. However, new instructions are coming every day regarding COVID-19 and by then the rules and guidelines may change.

Demanded to stop the organization of ‘Dharma Sansad’ in Aligarh

Here, in Aligarh district of Uttar Pradesh, the matter of the proposed ‘Dharma Sansad’ on January 22 is becoming agitated and some local citizens have demanded the government to stop its event.

Former president of Aligarh Muslim University Students’ Union Salman Imtiaz said in a press conference on Thursday that the atmosphere has been spoiled by the alleged hate speeches in ‘Dharma Sansad’ held in Haridwar and Chhattisgarh recently and now ‘Dharma Sansad’ will be held in Aligarh on January 22 and 23. Preparations are being made for the event.

He said that this is a well-planned conspiracy to spoil the atmosphere at the time of elections and the administration should stop it.

He said that there is every possibility of an alleged inflammatory speech in the ‘Dharma Sansad’ to be held in Aligarh. This will spoil the atmosphere in the communally sensitive Aligarh.

Imtiaz claimed that he was going to submit a memorandum to the District Magistrate regarding this demand, but the police put him under house arrest. He said that this is a violation of his constitutional rights.

It is worth noting that the Sanatan Hindu Seva Sansthan, Aligarh, has announced to organize ‘Sanatan Dharma Sansad’ at Sanatan Bhawan, Naurangabad on January 22-23. However, the district administration has denied having knowledge of any such program.

Ashok Pandey, the administrator of the organizing organization, told that his organization will organize ‘Sanatan Dharma Sansad’ on the topic ‘Role of saints in current politics’ and permission will be taken from the administration when the time comes.

In the posters released in connection with the program in the institute, photographs of Mahamandaleshwar Yeti Narasimhanand Giri, Bhopal MP Sadhvi Pragya Thakur and Mahamandaleshwar Annapurna Bharti have been put up as keynote speakers.

When contacted, Rakesh Kumar Patel, Additional District Officer, Nagar, Aligarh, denied having any information about any such program. He said that no written application has been given in this regard so far.

Earlier, a group of citizens led by Imtiaz, in a memorandum to the city magistrate in Upper Kot area of ​​the old city, had expressed concern over the President’s call to kill Muslims at the Dharma Sansad held in Haridwar last month, alleging that The central and state governments are not taking necessary cognizance of this matter.

It was said in the memorandum that the rhetoric in the Parliament of Religions is a serious threat to national security and the stand of the governments on this matter is very disappointing, so President Ram Nath Kovind should intervene in this matter.

It was said in the memorandum that if strict action is not taken against those making objectionable statements in the Parliament of Religions, then it will endanger the peace of the country.

Imtiaz, who recently joined the Congress, called on the national leadership of the party to openly oppose the preparations for organizing ‘Dharma Sansad’ in Aligarh and take the matter to the national level, also saying that all peace loving people should unite. Stop the holding of Parliament of Religions.