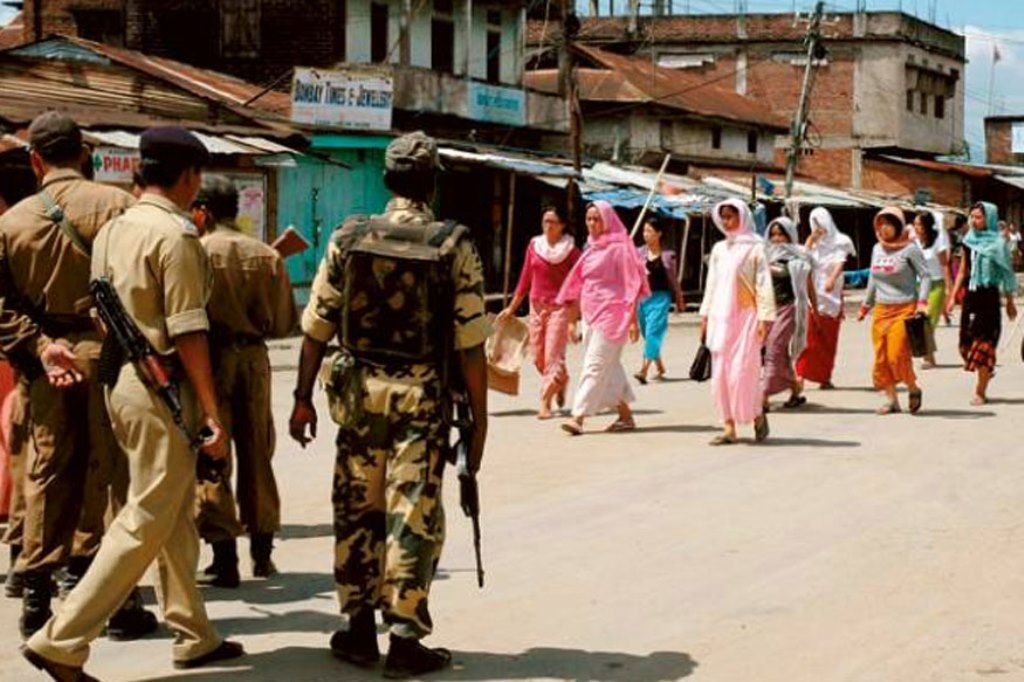 Itanagar/Gangtok/Imphal/Kohima: The National Socialist Council of Nagaland (Isak-Muivah) has warned of “unpleasant incidents” in Arunachal Pradesh, accusing it of hurting the interests of the Naga people in the state.

In a statement issued on Thursday, the Naga insurgent outfit accused Chief Minister Pema Khandu and Deputy Chief Minister Chowna Main for acting irresponsibly and failing to fulfill the wishes of the Naga people in Tirap, Changlang and Longding districts of the state, Hindustan Times reported. Charged.

“The state will have to bear these untoward incidents on its own as the state has deliberately ignored the anger of the Naga people of Arunachal Pradesh,” the statement said. The positive response of NSCN/GPRN (Government of the People’s Republic of Nagaland) should not be taken as their weakness rather than their humility.

The state government did not react to this statement.

In September last, the organization had issued a statement demanding the Naga MLAs of three districts of Tirap, Changlang and Longding to withdraw support to the BJP government led by Pema Khandu and Chowna Mein.

There are 11 MLAs in these three districts, out of which three are cabinet ministers.

The statement issued in September said, “The MLAs who have failed to uphold the rights of the Nagas of Arunachal Pradesh will be treated as anti-Naga.”

The demand was made in response to a circular issued by the Longding district administration.

In fact, the Constitution (Scheduled Tribes) Order Amendment Bill 2021 was informed to remove the word ‘Other Naga Caste’ in this circular.

This circular was issued after the passage of this bill in the Parliament in August.

In fact, in this bill, the list of Scheduled Tribes in Arunachal Pradesh was amended (on the recommendation of the state government) by adding the names of several indigenous tribes and the words ‘any other Naga tribe’ (which were there before the amendment) were removed.

The NSCN-IM statement issued in September said the move deliberately undermines and undermines the identity and existence of the Naga people. 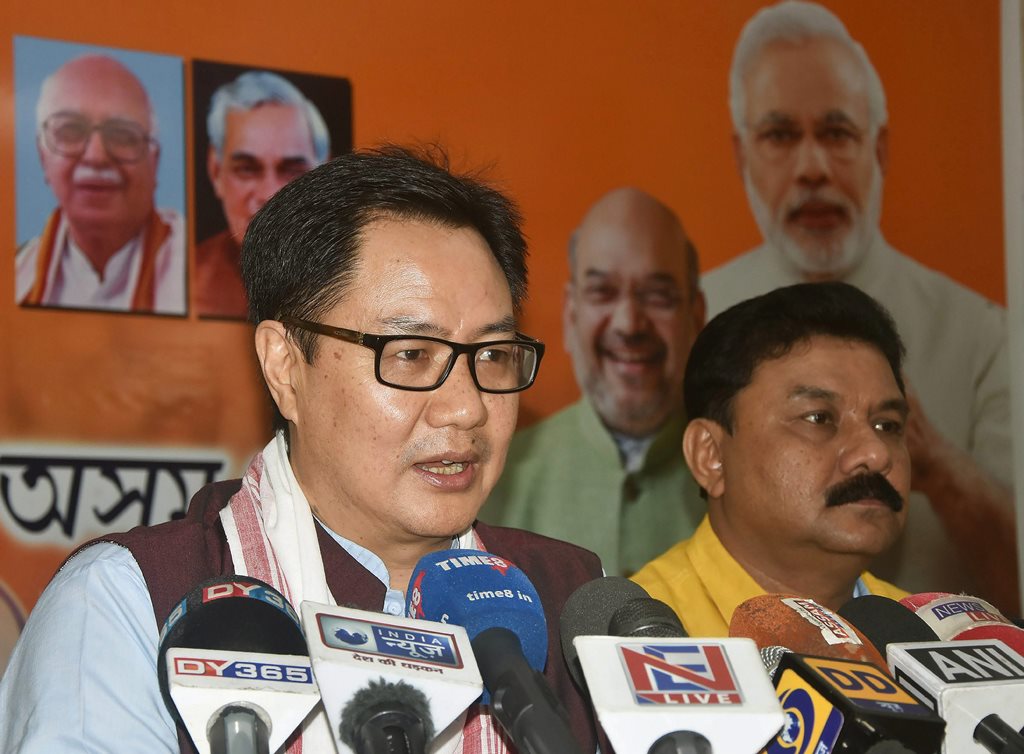 Union Minister Kiren Rijiju has rejected the renaming of some places in Arunachal Pradesh by China, saying that changing the names of places in India by anyone outside the country will not make any difference to their status.

The Union Law and Justice Minister said that such name change will not be acceptable to anyone.

“The name of Arunachal has been given by the country and it is acceptable to all,” he told reporters on the sidelines of an event on Thursday. Our traditional names will always remain the identity of our community. If someone from outside gives some name, it will not change our position.

Rijiju was responding to a question on Beijing changing the names of 15 places in Arunachal Pradesh.

He asked, ‘If someone from outside the country changes the name, will we accept it? The real names are the names given by our parents. If someone forcibly changes your name, will you accept it?’

India has already rejected the renaming of some places in Arunachal Pradesh by China, saying that the state has always been and always will be an integral part of India.

‘No refugee can claim rights of Arunachal tribals under CAA’

Rijiju also assured that under the amended Citizenship Act, ie CAA, no refugee in Arunachal Pradesh can claim the rights of the native tribals of the northeastern state.

The Union Law and Justice Minister told reporters after participating in the Shi-Donyi festival of the Tagin community that the Northeast has a special privilege under the CAA as the region has been exempted from the purview of this law.

Rijiju said, “Under the CAA, no refugee can claim tribal rights in Arunachal Pradesh. Union Home Minister Amit Shah has already sent a clear message to the Chakma and Hajong refugees living in the state.

“The government has sent a message to the Chakma and Hajong refugees to look for an alternative (state to live in),” he said. We hope they will support the government’s decision and act accordingly.

Earlier, Chief Minister Pema Khandu had announced that Chakma and Hajong refugees would be resettled outside the state.

Sikkim: Chief Minister said – come to the office in traditional dress once a week

Sikkim Chief Minister Prem Singh Tamang told Friday that all government employees should come to the office once a week in traditional attire.

According to the UNI report, while participating in the state-level Lepcha festival ‘Namsung’ at Marchak near the capital Gangtok, Tamang lauded all the communities involved in the festival.

During this, the Chief Minister said that during his childhood he used to talk to his friends in Tamang language.

He said, ‘When we learn English, why not our own language? Once a week, all government employees should come to the office in their traditional clothes.

Let us tell you that the ‘Namsung’ festival is a symbol of the festival of crop cultivation, which is celebrated for 12 days.

He appreciated Meghalaya Chief Minister Conrad Sangma, who arrived here on a personal visit with his family, and said that Sikkim is ready to cooperate with its neighboring state in any cultural exchange program.

Emphasizing on his government’s focus on promoting rural tourism, Chief Minister Tamang said that 3000 rooms are being prepared for the mega homestay.

Fearing communal tension, the Manipur government has taken all necessary steps to maintain law and order, The Hindu reported.

The Supreme Court has directed the Manipur government to file an affidavit on this.

Manipur Chief Minister N. Biren Singh said, ‘The government has made all preparations to face the challenge of this organization in the Supreme Court. These are the people who have not done anything good for us.

Biren Singh has been saying that the Narendra Modi government’s decision to implement ILPS is a gift to those who were rejected by the previous Congress government.

He said this would go a long way in protecting the interests of indigenous peoples who fear losing their existence due to the arrival of other peoples.

Explain that ILPS is applicable in Mizoram, Nagaland and Arunachal Pradesh. Outsiders planning to come to these states need permission to enter here for how many days they can stay here and they have to leave at a certain time.

Let us tell you that on January 7, leaders of four student organizations AMSU, MSF, KSA and SUK had protested condemning Amara Bengali.

The effigy of Bakul Chandra Roy, the general secretary of these organizations Amara Bengali, was also burnt and some leaders were also detained by the police.

Haobijam Challamba, the convener of the students’ union of the Joint Committee of ILPS, said that it is very unfortunate that a petition has been filed against the ILPS. The committee will continue with all forms of democratic agitation till the petition is withdrawn.

He also demanded the immediate and unconditional release of the arrested student leaders.

M. Tombi, convener of the Manipur Democratic Alliance, an organization of several political parties and president of Shiv Sena, said, “The time has come to take a collective decision to stop the use of Bengali script in Manipur.” This is against the provocation of the organization of West Bengal. ILPS was implemented in Manipur two years ago. Our party will extend full cooperation in any step taken by the government.

Nagaland’s Yimkhiung Tribal Council (YTC) intensified its protest on Thursday demanding the declaration of Shamatore as a district.

Council members took out a rally in Shamatore town on Thursday with people of all ages, including women, holding placards. The protesters were shouting slogans in their local dialect and singing songs reminding the government of the promises made to the people.

As part of its extended demonstration, the YTC has indefinitely banned the entry of government officials, researchers, domestic and international tourists to the Fakim ​​Wildlife Sanctuary, Mount Saramati, Mimi and the stone caves at Salomi in Shamatore.

The council has also decided to shut down the Likimero Hydroelectric Project in Pungro for an indefinite period.

YTC general secretary Astsuiba said that the top organization of the Yimkhiung tribe has been demonstrating peacefully from 9 a.m. to 12 noon daily in the areas under its influence since Monday “to express displeasure over the Nagaland government’s failure to grant district status to Shamataur”. What was promised by the government.

Meanwhile, Pungro Additional Deputy Commissioner Abhinav Shivam said that the Likimro Hydroelectric Project is a national asset and people will be affected by creating obstacles in it. He directed the YTC to withdraw the captive immediately, which has been rejected by the organization.

The YTC, however, deferred till Friday a notification to “recall” community leader from the ruling Nationalist Democratic Progressive Party (NDPP) and S Kyoshu, MLA from Shamatore-Chesore.

The decision was taken after Kiyoshu informed the working chairman of YTC about the state cabinet meeting on Friday.