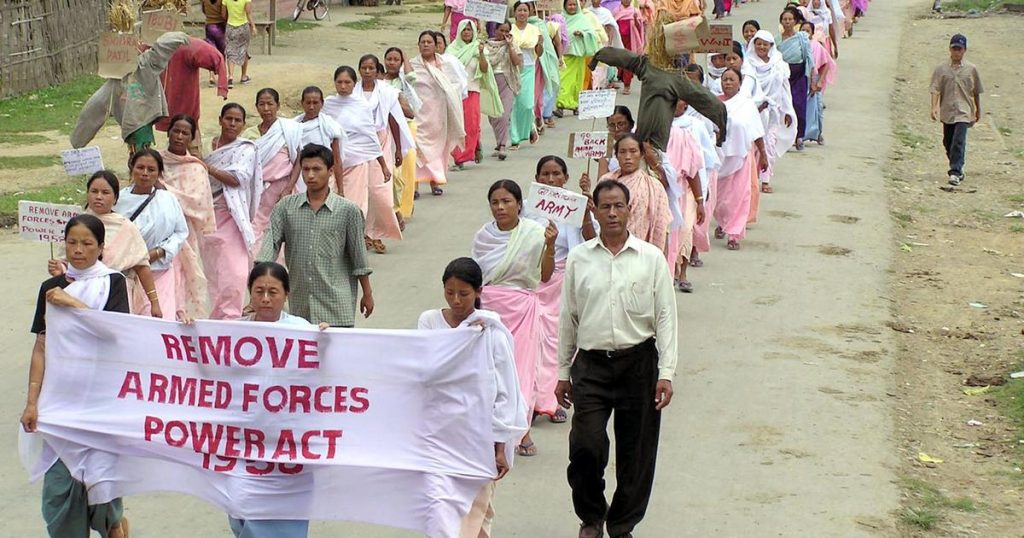 Kohima/Dibrugarh: Terming as unacceptable the Centre’s decision to extend the stringent Armed Forces (Special Powers) Act (AFSPA) by another six months, major Naga organizations have said the move is aimed at suppressing future generations of Nagas.

The Center on Thursday termed the situation in Nagaland as disturbed and dangerous and declared the entire state as a disturbed area under AFSPA for six more months from December 30.

The move comes days after the central government constituted a high-powered committee to examine the possibility of withdrawing the controversial AFSPA from Nagaland.

The Central Government on December 26 to look into the possibility of removing the controversial Armed Forces Special Powers Act (AFSPA), which has been in force in Nagaland for decades, to defuse tensions after 14 people were killed in firing by security forces in Nagaland. has constituted a high level committee. This committee will submit its report in 45 days.

AFSPA has been in force in Nagaland for decades.

K Elu Nadang, general secretary of Naga Hoho, a body of Naga tribes in Assam, Arunachal Pradesh, Manipur and Nagaland, said, “The Indian government has ignored the wishes of the Naga people. All the Nagas are pleading with the Government of India and continuously pressurizing them to repeal the Act. Naga people do not believe in this. We will go to any extent to pressurize the Government of India to repeal the Act.’

He wondered why AFSPA was extended despite peace in the state. “As long as the army has the right to shoot innocent people, there cannot be a peaceful atmosphere in our land,” he said.

He alleged that common people or Naga political groups were not creating law and order problem in the state but armed forces were doing so.

Eastern Nagaland People’s Organization (ENPO) President R. Tsapikiu Sangtam said that the organization has called a meeting on January 7 to discuss the extension of AFSPA.

Naga Mothers Association (NMA) advisor Prof. Rosemary Djuvichu lamented the extension of the AFSPA, saying it should not have happened amid protests from citizens and the ongoing investigation into the killings in the Mon district. He said that the extension of AFSPA could have been avoided.

No response has been received from any senior official of the state government in this regard so far.

According to the Indian Express, the Naga People’s Front (NPF), which is part of the all-party United Democratic Alliance (UDA) government in Nagaland, said in a statement that it was shocking and humiliating. Because AFSPA has been extended a few days after the 23 December meeting, which was presided over by Union Home Minister Shah.

The December 23 meeting was attended by Nagaland Chief Minister Neiphiu Rio, Deputy Chief Minister Yanthungo Patton and NPF Legislature Party leader TR Zeliang, as well as Assam Chief Minister Himanta Biswa Sharma. In this it was decided that the Center would constitute a high-level committee to look into the possibility of withdrawing AFSPA in Nagaland.

A statement issued by the NPF on Thursday said, “This extension of AFSPA is a manifestation of the complete disregard of the voices of small states, especially North-East India, by the Central Government. That too noting that the Nagaland Legislative Assembly had called a special one-day session on December 20 to discuss the AFSPA. The House had unanimously resolved to demand the repeal of AFSPA.

The statement said that the party will adopt democratic methods to remove AFSPA from Nagaland and will not sit silent until the central government reconsiders its decision.

Speaking to The Indian Express, a senior Nagaland government leader said, “People are feeling cheated, although this is a common practice (extension of the status of ‘disturbed area’), which is done every six months. This time it has come at a time when the sentiments of the people are hurt (by the death of 14 people).

At the same time, he said that the report of the High Powered Committee will be very important.

“Many are of the view that the extension of AFSPA should have been put on hold till the high-powered committee (on the death of 14 civilians) submits its report,” he said.

The state’s apex tribal body, the Naga Hoho, said it was deeply shocked by the approach of the Center to ignore the voice of the Naga people.

“This is a direct challenge and a message from the Government of India to crush the indivisible rights of the Nagas,” the organization said in a statement. If India is truly a democratic country, then the voice of the people should have been heard. On the contrary, the dignity and rights of the Naga people are neither respected nor considered human.

It also called upon each Naga to be prepared for any eventuality in the days to come.

Government sources said the latest extension will only intensify the protests against AFSPA. Following the death of 14 civilians, massive rallies to repeal the Act were earlier held in the capital Kohima as well as in eastern Nagaland districts.

The Naga Students Federation (NSF), the state’s apex student body, said they would oppose the AFSPA extension through a series of democratic movements.

“In view of the stubborn attitude of the Government of India, the Naga people should be prepared to face them in this new year,” the NSF said in a statement.

It is to be known that after the death of 14 civilians in Mon district by an army contingent on December 4, protests are being held in several districts of Nagaland for the withdrawal of AFSPA.

The Nagaland government’s Special Investigation Team (SIT) on Thursday interrogated 21 Para Special Forces of the Indian Army in connection with the death of 14 civilians in Mon district due to firing by security forces.

According to sources in Assam and Nagaland, the 22-member SIT interrogated Army personnel at the Rain Forest Research Institute (RFRI) located in Jorhat district of Assam.

Sources said the SIT led by Nagaland Police’s Additional DGP (Law and Order) Sandeep M. Tamgadge interrogated the soldiers till late Thursday evening and it would be done again on Friday morning.

The Nagaland Police and the Indian Army were repeatedly contacted to get information regarding the interrogation, but without success.

Tight security arrangements have been made in the RFRI campus and media is not allowed to enter.