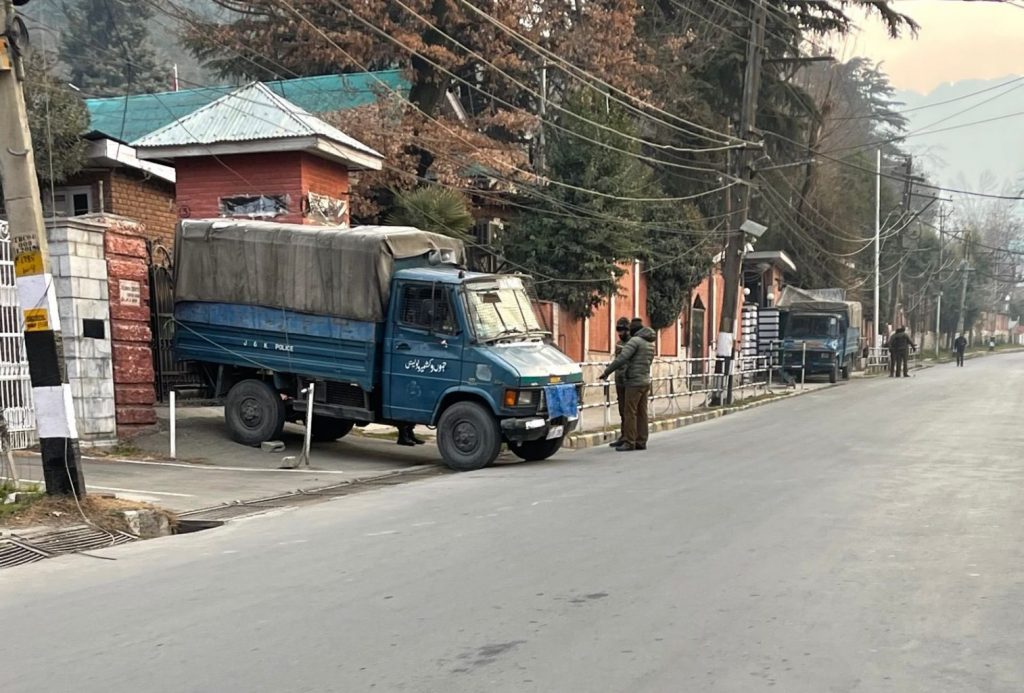 Omar Abdullah, son of former Chief Minister Farooq Abdullah and Vice President of National Conference, said, ‘Good morning and welcome to 2022. Beginning of a new year with the same J&K Police which is illegally locking people in their homes and the administration is so scared of normal democratic activity.

Talk about a lawless police state, the police have even locked the internal gate connecting my father’s home to my sister’s. Yet our leaders have the cheek to tell the world that India is the largest democracy, hah!! pic.twitter.com/flNICRGk58

He said, ‘Trucks are standing outside our gate to stop the peaceful sit-in demonstration of the Gupkar alliance. Some things never change.

Former Chief Minister Omar Abdullah said, ‘Talking about a chaotic police state, the police have also closed the inner gate connecting my father’s house with my sister’s. Yet our leaders have the courage to tell the world that India is the largest democracy.

People’s Conference chief Sajjad Lone said the right to protest is rooted in the concept of a vibrant democracy.

Senior CPI(M) leader and coalition spokesperson MY Tarigami said it is sad that the Jammu and Kashmir administration is “so scared that it is not able to allow peaceful protests”.

Tarigami said he too was placed under house arrest and his residence was locked.

“The situation becomes even worse when people are not even allowed to express their opinion in front of the public,” he said.

Former Chief Minister Mehbooba Mufti has also been placed under house arrest. He said, ‘There is also a truck parked outside my house.’

The PAGD had spoken of protesting in Srinagar on Saturday against the proposal of the Delimitation Commission to increase the assembly seats to six in Jammu division and one in Kashmir. After the recommendations of the commission, the seat number can be 43 in Jammu and 47 in Kashmir.

Many believe that this proposal goes against the population ratio of both the provinces of the former state.

The opposition has been alleging that the commission’s recommendations are nothing short of a “shameless display of fraud” as it goes against the concept of adult suffrage of “one person, one vote”.

However, the Delimitation Commission has been claiming that the allocation of seats takes into account other factors such as population, administrative units, area and proximity to the border.

At present there are 46 seats in Kashmir division and 37 in Jammu.

This was objected to by parties like the National Conference, accusing the commission of allowing the political agenda of the BJP to dictate its recommendations.

The PDP, the J&K Apni Party and the People’s Conference, which is known to be friendly to the BJP, also strongly opposed the commission’s draft recommendations, which would change the electoral map of Jammu and Kashmir.

National Conference President Farooq Abdullah had said on December 24 that his party was preparing to move the Supreme Court against the recommendations of the Delimitation Commission and the party believes that the very basis of this exercise is illegal.

Hundreds of National Conference (NC) and Peoples Democratic Party (PDP) activists on Saturday organized separate protests in Srinagar after top leaders of the parties were allegedly detained by the authorities ahead of a proposed sit-in against the draft resolutions of the Delimitation Commission. took out a protest march.

The party workers tried to proceed towards Gupkar Road, but were stopped by the police outside the party office.

The National Conference spokesperson alleged that the police “dragged” the party workers back to Nawa-e-Subah.

Dar said, “We wanted to take out a peaceful protest march against the draft resolutions of the Delimitation Commission, but were stopped by the police. They didn’t even allow us to stage a dharna.

Omar wrote on Twitter, “Many congratulations to my colleagues for coming out and registering your protest about what is being done to power down people.”

Despite the despotic administration’s attempts to foil our protests, PDP & NC workers managed to hit the streets in Srinagar today to raise their voice against the illegal revocation of Article 370. I salute their courage & resolve. pic.twitter.com/yfRa5nSdmg

Mehbooba said in a tweet, “Despite the efforts of the autocratic administration to thwart our protest, PDP and National Conference workers today (Saturday) managed to raise their voice against the illegal revocation of Article 370 by taking to the streets in Srinagar. I salute his courage and determination.

Mir said in a statement, “The detention of a prominent leader like Dr. Farooq Abdullah before the proposed sit-in protest against the draft of the Delimitation Commission is a hypocrisy, immoral and against the basic foundation of Indian democracy, which guarantees freedom of expression to every citizen. guarantees.’

He said that the ‘detention’ is actually a ‘gift’ given by the government on the occasion of New Year. He condemned the “illegal detention” of Abdullah and other PAGD leaders.

Mir said the Congress believed that such “undemocratic steps would further disappoint the people of Jammu and Kashmir” “who have already lost faith in the present system”.

The Congress leader said that “preventing” leaders from protesting peacefully, “points to the hypocrisy of the BJP government”.

breaking news breaking news in hindi headlines in hindi Hindi news india news latest news in hindi live news news in hindi not news The Wire the wire in hindi thewire no
Share. Facebook Twitter Pinterest LinkedIn Tumblr Email
Previous ArticleDemand for court-monitored investigation by filing a petition in connection with hate speeches
Next Article Former army chiefs and bureaucrats wrote to the President – take action against those who give hate speech