Kharsawan firing: Even after 74 years, the wounds of the tribals are still fresh 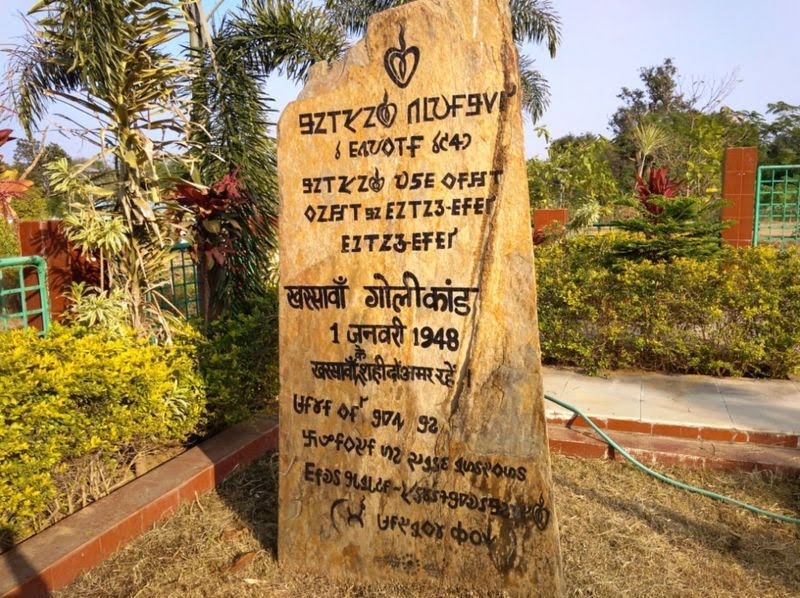 At the time of integration of princely states after independence, the tribals of Seraikela and Kharsawan were against the merger with Odisha. The tribals, demanding a separate state for themselves ‘Jharkhand’, had gathered at the Kharsawan market ground on January 1, 1948, the day of the formal transfer of power, where they were fired upon by the then Odisha administration without warning. It is claimed that thousands of tribals had lost their lives in this.

‘The entire history of our people is the history of revolts to stop the endless oppression and evictions of non-tribals. I believe all of you have said that we are going to start a new chapter. Where all the goods will be there, everyone will get equal opportunity and not a single citizen will be neglected.

There is a tradition of self-government in the tribal society, but in the middle of the 17th century in Kharsawan and Seraikela region, the Dikus fraudulently established their kingdoms in tribal dominated areas and became the master-kings of land and other natural resources. During the British rule, he accepted the slavery of the British. However, the resistance of the tribal society (Tilka Majhi’s rebellion) started with the entry of Dikus in these areas.

In the process of integration and merger of princely states, the princely states of Kharsawan, Seraikela approved its merger with Odisha and 1 January 1948 was formally designated as the day of transfer of power. But, Bhumij, Munda, Santhal and other tribals were against this merger. They were demanding a separate tribal dominated state for themselves – Jharkhand.

On December 25, 1947, a meeting was held on the banks of the river Chandrapur-Jojodih, against the merger of the princely states, it was decided to unite the tribals on the demand of a tribal state by merging the tribal-dominated areas and to hold a meeting at Kharsawan Bazar ground on the weekly Haat on January 1, Where it was decided to be addressed by Marang Gomke Jaipal Singh Munda.

As soon as the information about the arrival of Jaipal Singh Munda, a member of the Constituent Assembly, an alumnus of Oxford University and the head of the Adivasi Mahasabha, reached among the tribals, Ranchi, Chakradharpur, Chaibasa, Karandih, Parsudih, Tamad, Wundu, Jamshedpur were to hear and see them. , Kharsawan, the local tribal children of Seraikela, old, young, women and men, all prepared for several days, armed with bundles on their heads, food items and traditional weapons – axe, arrow bow, drum, drum, and the meeting place on foot. Went towards

Due to Thursday being the weekly Haat day, more people than usual were present in and around the market ground. People continued to come for the meeting. Songs of independence, slogans of tribal unity, demand for a separate state- Jai Jharkhand, decision to merge princely states and slogans were being raised against the Odisha Chief Minister. As more than 50,000 people reached the meeting place, it was estimated that the decision to merge the princely states had ignited the entire tribal dominated area.

The then Chief Minister of Odisha, Vijay Pani was already ready to crush any kind of opposition by force, so he had made his preparations in advance. The Odisha Armed Security Forces and police personnel were sent to Kharsawan via the forest on 18 December 1947, two weeks before the meeting. These included 3 armed companies who were lodged in the school of Kharsawan.

The slogan of ‘Jharkhand Abuv: Odisha Jari Kabuv: Roti dumplings in oil, Vijay pani jail mein’ started resonating in the sky. Long queues of the procession started, the procession turned into a meeting in the afternoon after going to the Haat Maidan.

The leaders of the Adivasi Mahasabha addressed the tribals who came from far and wide. But Marang Gomke could not attend the meeting of Jaipal Singh Munda Kharsawan. A group of tribals wanted to meet the then Raja of Kharsawan to request a reconsideration of the merger decision but it was not possible.

Shortly after the end of the meeting, suddenly without any warning, on the orders of the Odisha government, the Odisha security force and police, equipped with modern weapons, started firing indiscriminately on the tribals.

People started running here and there to save their lives, some lay on the ground, some jumped into the well built in the field, some were killed in the stampede. The largest number of children, the elderly and women were among them. The entire ground was covered with dead bodies and now the Odisha military and police surrounded the ground from all sides.

The injured were neither allowed to leave the field nor were they brought to the hospital for treatment. Army and police personnel filled the bodies in trucks and threw them in the forests of Saranda. The well filled with dead bodies on the ground was permanently closed during the night itself. The Government of India also did not set up any investigation from its side.

The Odisha government banned journalists from visiting the spot to hide this massacre of tribals. Even the medical team and service team sent by the Bihar government were returned. Curfew was imposed in Kharsawan only 133 days after independence.

It is told in Santosh Kiro’s book The Life and Times of Jaipal Singh Munda that Dr. Ram Manohar Lohia had said about this incident, ‘This is the second Jallianwala Bagh. The whole of India knows the Jallianwala Bagh massacre as an important page of the freedom struggle. Where the foreign ruler and the foreign general Dyer had opened fire, the Odisha government of independent India, which belonged to its own countrymen, opened fire on its own countrymen in Kharsawan. What can be more shameful and pity than this.

The martyrdom of thousands of tribals prevented the merger of tribal dominated areas with Odisha. This was the period when the demand for a separate state ‘Jharkhand’ for the tribals was at its peak.

After the Kharsawan massacre, on 28 February 1948, the Adivasi Mahasabha, on the occasion of its foundation day (30- 31 May 1938), called for ‘the formation of a new tribal dominated province by joining Chhota Nagpur and Santhal Pargana’ and ‘Adivasis will not take a step back from Purna Swaraj’. ‘ repeated the resolution.

The inclusion of tribal dominated areas in Bengal, Odisha and Madhya Pradesh was opposed. As a result, the Adivasi Mahasabha converted itself into a political organization ‘Jharkhand Party’.

The tribals who were killed by the government bullets in the massacre were not given the status of martyr, even the FIR was not registered. No one was punished in this incident.

The then Chief Minister of Bihar Government Shri Krishna Singh demanded the intervention of the Central Government on this police action of the Odisha Government and the merger of the two princely states was stopped in Odisha. An inquiry committee was also formed on this massacre, but its report was never made public nor was that report ever discussed.

On 18 May 1948, the Central Government merged the princely states of Seraikela and Kharsawan into Bihar on the basis of the recommendations of the Budhkar Commission.

Addressing a meeting of the Constituent Assembly on the eve of independence, just 133 days before the Kharsawan massacre, Prime Minister Jawaharlal Nehru had said, ‘Many years ago we had made a promise with destiny and now the time has come to fulfill that promise. Do it, when the whole world is sleeping at midnight tonight, then India will rise with life and freedom.

After 74 years of Kharsawan massacre, the wounds of the tribals are still fresh. Tribals still remember January 1st not as New Year but as Black Mourning Day. Every year the martyrs are remembered by organizing ‘Dul Sunum’ Shradh of the martyrs at the incident site.

The place that Jallianwala Bagh got in Indian history was not given to the Kharsawan massacre. Efforts to hide him are still going on. But even today these massacres are alive in the memories, stories, songs of the tribals.

This is not the first tribal massacre, which was removed from the history books, but similarly the Mangarh (1913, Rajasthan) massacre was also not given due place.

(The author teaches at Shyam Lal College, University of Delhi.)