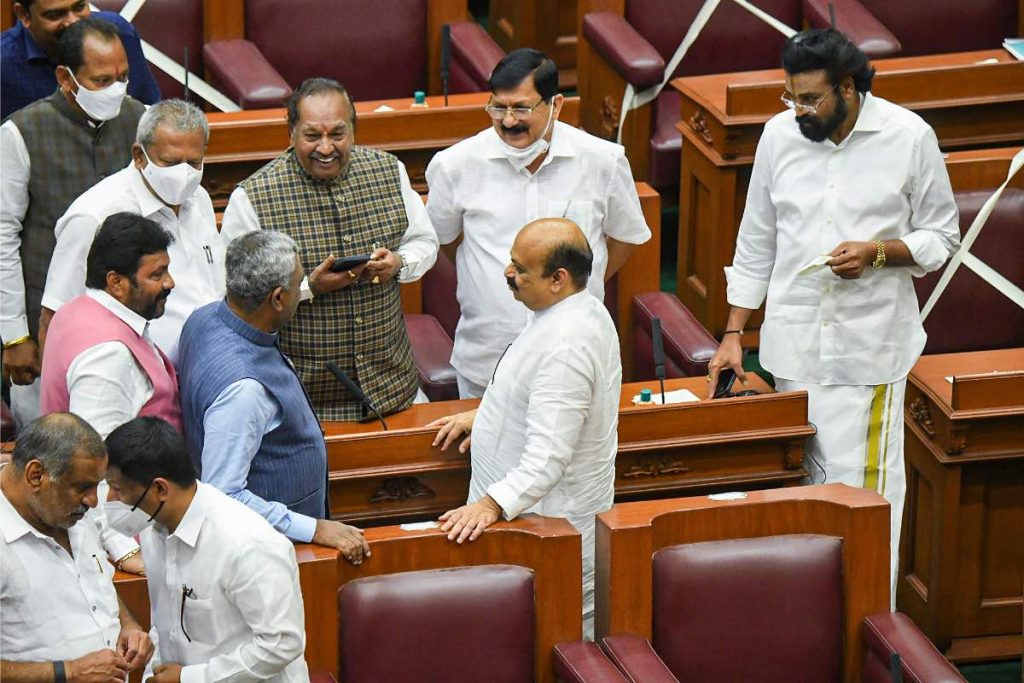 Belagavi: The Karnataka Assembly on Thursday approved the controversial anti-conversion bill amid an uproar. Chief Minister Basavaraj Bommai said the bill is both constitutional and legal and aims to get rid of the problem of conversions.

Congress strongly opposed the bill, saying it is “anti-people, inhuman, anti-constitutional, anti-poor and harsh”. Congress urged that it should not be passed for any reason and should be withdrawn by the government.

The Janata Dal (S) also opposed the bill. This bill was introduced in the assembly on December 21 last.

The bill provides for protection of the right to freedom of religion and prohibits unlawful transfer from one religion to another by coercion, undue influence, coercion, inducement or any fraudulent means.

The Bill provides for payment of compensation of five lakh rupees (on the orders of the court) to the victims of conversion by persons attempting to convert and double the amount if the offense is repeated.

On the other hand, in respect of cases of mass conversion, there is a proposal of imprisonment of three to 10 years and a fine of up to one lakh rupees. It has been said that marriages performed with the intention of conversion can be declared invalid by the Family Court or the Judicial Court.

The offense under this Bill is non-bailable and cognizable.

The House passed the bill by voice vote amid uproar. Congress members were opposing the bill by coming near the plinth. They were demanding the continuation of the discussion on the bill, which had started today (Thursday) morning. They were also objecting to some comments made by Minister KS Eshwarappa during the intervention in the discussion.

In the discussion on the ‘Karnataka Protection of Right to Freedom of Religion Bill, 2021’ in the House, the ruling Bharatiya Janata Party (BJP) alleged that the previous Congress government led by Siddaramaiah was responsible for this bill. In support of its claim, BJP laid some documents on the Table of the House.

However, Leader of Opposition Siddaramaiah denied the claim of the ruling party. Later, after seeing records in the Speaker’s office, he admitted that as chief minister he had only asked the draft bill to be placed before the cabinet but no decision was taken.

Thus it cannot be seen as the intention of his government, he said.

Siddaramaiah alleged that the Rashtriya Swayamsevak Sangh (RSS) was behind this bill.

On this, Chief Minister Basavaraj Bommai said, ‘RSS is against conversion, it is not a hidden thing, it is well known. Why did the Congress government in 2016 initiate the bill during its tenure to follow the policy of the RSS? This is because Congress Chief Minister Virbhadra Singh had brought a similar law in Himachal Pradesh. You are a party to this bill.

Bommai said the bill is both constitutional and legal and aims to get rid of the problem of conversions. He said, ‘This is for a healthy society. Congress is now doing vote bank politics by opposing it, their double standard is now clear.

Christian community leaders have also opposed the bill. Apart from the penal provisions in the bill, it has been emphasized that those who want to convert to any other religion will have to submit a declaration in the prescribed format to the District Magistrate or Additional District Magistrate at least 30 days in advance.

Karnataka Home Minister Arg Gyanendra introduced this bill. He said that eight states have passed or are implementing such a law, and Karnataka will become the ninth such state.

According to Hindustan Times, the bill also states that anyone who wants to convert must submit an application to the district collector, who will scrutinize the application, interview the applicant to find out whether the conversion force Or not by temptation.

If the application is found genuine, other departments will be informed to ensure that the converted person loses the benefits from his existing caste or religion and is included in the category to which the said person is converting.

The anti-conversion bill, based on similar laws brought in various BJP-ruled states like Uttar Pradesh, Madhya Pradesh and Gujarat, has been passed at a time when there has been an increase in attacks on members of the Christian community in the state.