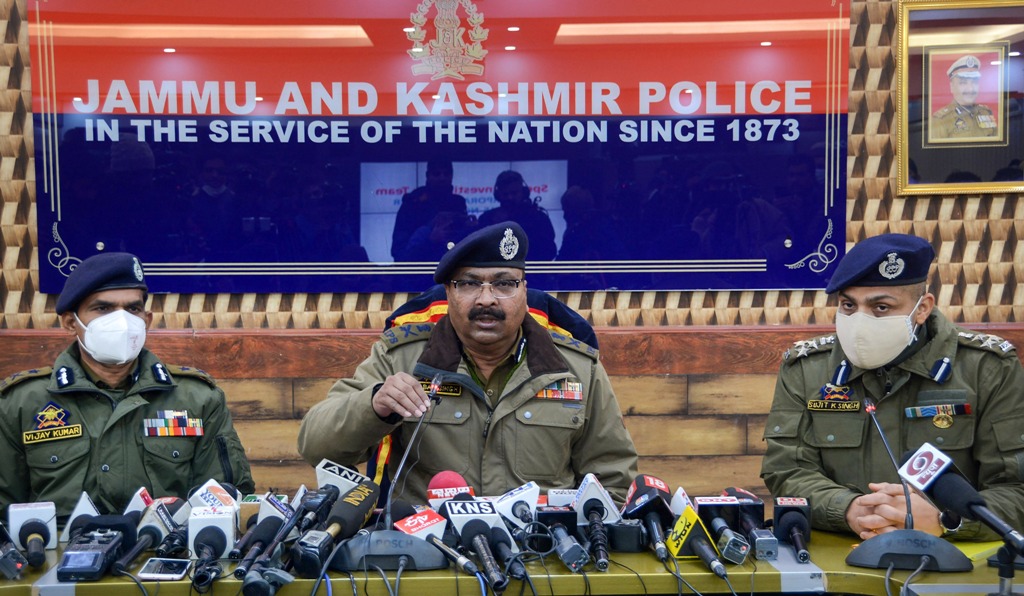 On November 15, three persons – businessman Mohammad Altaf Bhat, dentist Dr. Mudasir Gul and Amir Magre – were killed during an encounter with terrorists in Hyderpora area of ​​Srinagar. Political parties had raised questions on the virtual press conference conducted by the police, in which a kind of ‘clean chit’ was given to the officers involved in this encounter.

Srinagar: Jammu and Kashmir Director General of Police (DGP) Dilbag Singh on Friday said that some people are indulging in “soft separatism” by cleverly supporting terrorism.

Singh termed the Hyderpora operation as “clean” and asked leaders who questioned the “clean chit” given to security forces to produce evidence before the probe team.

Singh said he was hurt by the irresponsible statements of a section of leaders in Kashmir.

Let us inform that the political parties of Kashmir had raised questions on the virtual press conference conducted by the police, in which a ‘clean chit’ was given to the officers involved in this encounter.

Following criticism from political parties, the SIT probing the encounter had threatened punitive action against him.

The DGP said in a press conference, ‘We are definitely hurt by such statements. This is irresponsible on the part of some people who are not part of the investigation and they don’t know anything about the investigation on the ground.

He was replying to questions on statements of political leaders against the investigation of the local police in connection with the Hyderpora encounter.

On the evening of 15 November, there was firing in Hyderpora area of ​​Srinagar. During this, a joint team of police, army and paramilitary forces laid siege to a shopping complex after receiving information about the presence of terrorists.

A Pakistani terrorist and three other persons were killed in the encounter and the police claimed that all those killed had links to terrorism. The families of the three had claimed their innocence, after which the police had to order an investigation.

After this, Lieutenant Governor Manoj Sinha had ordered a magisterial inquiry into the matter on November 18. This was one of the rare operations carried out jointly by the Army and the Jammu and Kashmir Police within the city limits.

Meanwhile, the Special Investigation Team (SIT) headed by Deputy Inspector General of Police, Central Kashmir Sujit Kumar had on December 29 warned of legal action against politicians in Jammu and Kashmir for making “speculative” statements about the investigation. .

The Jammu and Kashmir DGP clarified that the operation was “clean” and carried out in a professional manner. “We have made it clear that the campaign was clean. It was transparent.

The top police officer also said that the rhetoric made by the leaders is in violation of the law.

“We have made it clear that those statements are in a way a violation of the law,” he said. Maybe if people don’t change their ways, at some stage the law will take its course.

He also asked those who raised the issue to present evidence before the investigation team.

“If anyone has any evidence, he can present it for magisterial inquiry and before the SIT,” he said.

When asked whether action should be taken against such people, Singh said if one looks into the cases registered under the Unlawful Activities (Prevention) Act (UAPA), some of them are being considered.

“We will definitely find more evidence against those who have supported terrorism in any way,” he said.

The DGP said, ‘These people are indulging in soft separatism. We have taken action against some of them. We will look for more evidence. No one is above the law.’

According to the Indian Express report, without naming anyone, DGP Singh said, “There are people who have seen this kind of scenario for many years and they know the ground reality, but I think counting the votes on the dead bodies has to be done.” Maybe that’s their mission. We are certainly hurt by these allegations. These are very irresponsible on the part of some people and these people are not even part of the investigation and do not know anything.

Singh said that such people will not be allowed to succeed in their intentions.

He said, ‘We have also clarified that this statement is in some way a violation of law. Perhaps at some stage if people do not improve, maybe the law will take its own course.

Kashmir IGP Vijay Kumar in Srinagar said the families of the victims should refrain from questioning the investigation. At the same time, mainstream leaders should avoid inciting people.

IGP Kumar said, “In a democratic set-up, leaders and family members have the right not to be satisfied with the investigation. They can call for probe at higher level from NIA, CBI and court.

He further said, ‘We will not have any objection to this, but to say that there is an error in the investigation, only the court can decide. The leaders will not decide it, neither the family nor the media persons can decide on it.

Stating that he was not giving a clean chit to anyone, Kumar said, “Every case will be decided by the court, so I request the leaders not to instigate the public.” Let the court decide. If they feel that there is a lack of investigation, then orders will be given for re-investigation.

Let us inform that on Thursday, former Chief Minister and National Conference President Farooq Abdullah had rejected the police investigation and said that there should be a judicial inquiry into the encounter.