Hindutvaists burn effigy of Santa Claus in UP, disrupt Christmas celebrations in Assam 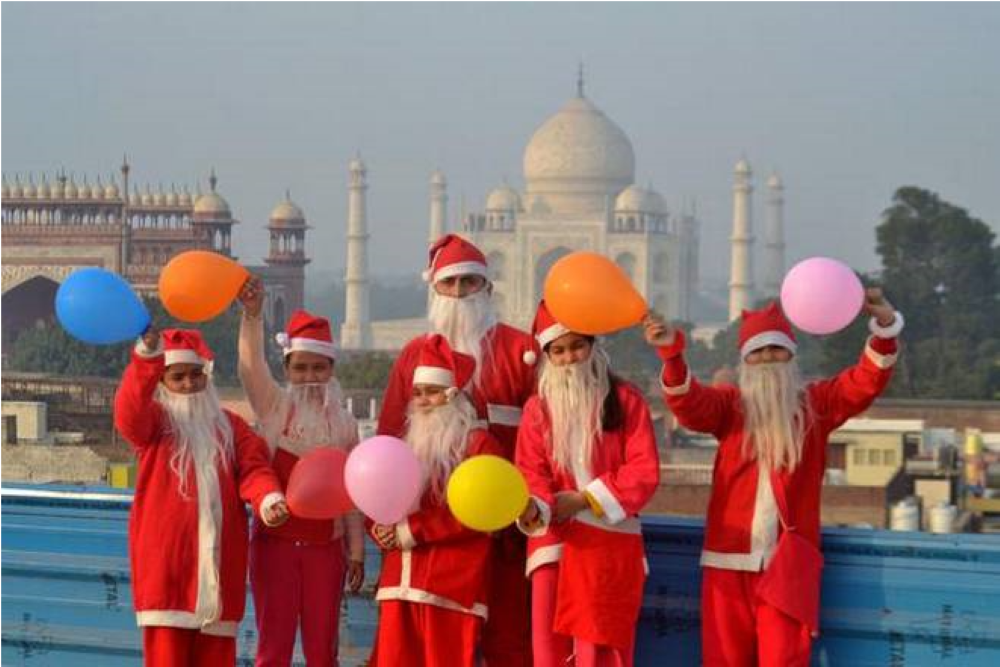 Hindutva organizations in Agra allege that Christian missionaries spread Christianity by giving gifts through Santa Claus to attract children and the poor to their religion on the occasion of Christmas. At the same time, saffron-clad youths in Assam’s Silchar disrupted the Christmas program demanding that Hindus should stay away from the celebration.

New Delhi/Silchar: In Agra, Uttar Pradesh, some Hindutva organizations burnt an effigy of Santa Claus on the occasion of Christmas on Friday.

They allege that Christian missionaries distribute gifts and spread Christianity through Santa Claus to attract children and the poor to their religion on the occasion of Christmas.

In Agra, India, Hindu right-wing, after beating with shoes is burning an effigy of Santa Claus. New India has found a new way to celebrate Christmas! pic.twitter.com/wMzOIlI8Og

According to India Today, Chouhan said, ‘Santa (Clause) does not come with any gift, his only goal is to convert Hindus to Christians. It won’t work anymore. Any attempt at conversion will not be allowed to succeed. If this is not stopped then there will be agitation in missionary schools.

Another member of the organization, Avtar Singh Gill, claimed, “We will keep a watch on the missionaries who go to slums and convert Hindus to Christianity.” Members will also take strict action against them.

Gill said, “To stop this (conversion), teams will be formed by the National Bajrang Dal. These teams will keep an eye on the settlements and localities so that such malicious attempts to convert to Christianity can be thwarted. If any missionary is found doing this, then International Hindu Parishad and Rashtriya Bajrang Dal will take strict action against him.

In Silchar in Cachar district, miscreants disrupted the Christmas program demanding that Hindus should stay away from the celebration.

A senior police officer said on Sunday that seven youths involved in the incident that took place on Saturday evening have been detained so far. Cachar Superintendent of Police Ramandeep Kaur said the incident happened during Christmas celebrations in an open ground in the city.

“Some boys went to the venue and asked other Hindus not to participate in the ceremony,” he said. They did not stop the Christians celebrating this festival.

Kaur said that the police has not received any complaint regarding the incident but still they have detained the youths involved in it.

The Superintendent of Police said, ‘We are probing the incident. We do not have any information about the involvement of any group so far.

According to The Sentinel, he was affiliated with the saffron-clad Bajrang Dal. Locals claimed that the miscreants are related to Bajrang Dal.

According to eyewitnesses, these youths wearing saffron cholas started scuffles with the people present at the venue and raised slogans of ‘Jai Shri Ram’.

The incident took place at around 9 pm when many people were present at the venue. When the people present there asked the youth why they were raising objections to the celebrations, they reportedly said that being a Hindu they should celebrate ‘Tulsi Day’ which is celebrated only on Christmas day. No one is celebrating this which has hurt their sentiments.

breaking news breaking news in hindi headlines in hindi Hindi news india news latest news in hindi live news news in hindi not news The Wire the wire in hindi thewire no
Share. Facebook Twitter Pinterest LinkedIn Tumblr Email
Previous ArticleUttarakhand: Why there is a ruckus in the state Congress before the assembly elections
Next Article Even biological father cannot replace mother in child’s life: Punjab and Haryana High Court