Haridwar Dharma Sansad: Why the police are helpless in front of the business of hate 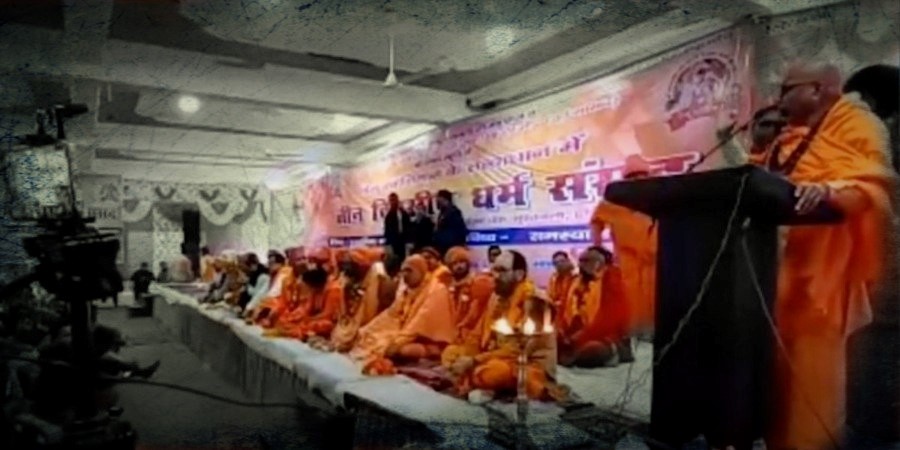 Most of the things said in the so-called Dharma Sansad held in Haridwar fall under the category of serious offense under the Indian law, but the action taken by the Uttarakhand Police so far shows that it is not for the law or the constitution, but for the ruling party. is working.

During the last 17-19 December, a so called Dharma Sansad was organized in Haridwar. It was addressed by many Hindu religious leaders and fundamentalists. The history and political ties of many of these individuals have already been disclosed. Several cases are already registered against some.

The theme of the event was ‘Sanatan’s Future in Islamic India: Problems and Solutions’. The subject was strange. I do not know, except these, who is such a person, court or government in the country who believes that we are living in ‘Islamic India’.

The figures of Census (2011) are in front of everyone. The percentage of population of Muslims in India is 14.2 and that of Hindus is 79.8. Now no one knows how India became Islamic. It is clear that this is an attempt to present the worn-out raga of ‘Hindu Danger Mein Hai’ in a new tone.

Many objectionable and inflammatory speeches were given during the event. In the speeches, some of the speakers were talking in a twisted manner. But seeing the things in their full perspective, it is clear that they were neither shooting arrows in the air nor were talking any theoretical things. They were talking only about this country and the Muslims living here, even though a case could not be made against them due to evasive things.

There has also been a sharp reaction in the foreign media and it has been said that the government has kept silence on the anti-Muslim hatred.

Pakistani journalist Hamid Mir, while retweeting a video clip of the Haridwar incident, wrote that ‘the speaker woman is proving that Mohammad Ali Jinnah was absolutely right that he created a separate Pakistan for Muslims. Thank you Jinnah sahib’.

The veracity of the video has not been denied so far. But social media But these videos have become viral all over the world.

Statements that are clearly an offense

1. treason: A speaker said that the ‘nectar’ that will come out of this Parliament after three days will be a mandate and the democratic governments in Delhi, UP, Uttarakhand and other states will be bound to obey it. if they don’t agree Fought a terrible war even than the revolt of 1857 Will go.

It is well known that the revolt of 1857 was done to overthrow the British rule. It is clear that by comparison, the speaker is threatening that if constitutionally established governments do not obey the mandate, then a war will be waged to overthrow them.

In the context of the famous judgment of Kedar Nath Singh (1962) of the Constitution Bench of the Supreme Court, making such threats to the government is clearly sedition. The court had clearly said that any criticism of the government is forgivable, but to talk about its overthrow by violence is sedition.

2. Criminal Threat: The speaker also said that if any hotel in Haridwar celebrates Christmas or Eid, then they should be ready to get their glasses broken. This is not only a violation of the constitutionally guaranteed rights of religious freedom and livelihood but is also punishable with criminal intimidation.

3. Arms Act: Two speakers called for people to keep swords at homes. One said that he was in the house kill intruders Will come in handy. The other talked about keeping sharp swords. Then he felt that there might be a legal problem in it. Then he said that if any officer asks, then tell that goddess worship kept for.

But he did not know that this argument of worship of Goddess would not work. Under the Arms Rules 2016, almost all the state governments have made it mandatory to have arms license for keeping swords, furs, ballam-spears etc. by issuing notifications. Therefore, keeping them without a license will become an offense under the Arms Act.

It is to be noted that these weapons were used during the event. open display was also done.

4. Inciting discontent, indiscipline and rebellion among the police and the army: a speaker myanmar Referring to this, he said that here also the police, army and leaders should run a ‘cleanliness campaign’. He did not explain this so-called ‘cleaning drive’, but since everyone knows that ethnic cleansing or genocide of Rohingya Muslims took place in Myanmar, the speaker’s intention and gesture was clear.

The police and army in the country can perform only the tasks specified under the law and the constitution. No ‘cleanliness drive’ comes under his official duties. Therefore, even once I ignore the intention of the speaker for the debate, the fact remains that he called upon the police and the army to do what is not their lawful act.

It is an offense of indiscipline and abetment to sedition from the Government (which is a disinfection as per IPC Section 124A) under Section 3 of the Police (Insightment to Disfection) Act, 1922.

This will become an offense punishable under IPC sections 182 and 211.

Statements which are grossly reprehensible but not an offense under law

One speaker said that if we have to reduce their population then we must be ready to kill And even if we get 100 soldiers, they will be able to kill 20 lakhs. Here the use of ‘if’ saved it.

The second referred to a statement made by former Prime Minister Manmohan Singh in Parliament in which he purportedly said that minorities have the first right on the country’s resources. the speaker said if i were an MP And if I had a revolver, I would have shot them with six bullets. This is fiction and there is no concept of ‘thought crime’ in the law of the country.

Another speaker said that he would like to see such a young sannyasin will give one crore rupees Who is ready to become Hindu Prabhakaran. If someone asks him that who has already taken retirement, what will he do with one crore rupees?

He also said that it is necessary to have Prabhakaran, Bhindranwale and Shubeg Singh in every temple to protect Hinduism. Although his intention was clear, glorifying a terrorist is not a crime in the eyes of law.

It was reported in the media in 2017 that the picture of Bhindranwale with the ten Sikh Gurus has also been kept respectfully in the Central Sikh Museum of the Golden Temple.

Due to all such things being a bit equivocal, even if there is no crime in the eyes of law, but looking at the whole perspective, it is clear how the venom was done against the Muslims of the country from the public forum.

What is the police doing?

According to media reports, the police registered a case against a person named Jitendra Narayan Singh Tyagi (who was a Muslim named Wasim Rizvi until a few days ago) and others under section 153A (causing enmity between groups) on the complaint of Gulbahar Khan. has done.

After the detailed legal discussion done above, it should be clear that this action of the police is to throw dust in the eyes of the public. They just want to show that the case is done.

This case will be weak from the beginning because many of the speakers were talking evasively.

On one hand, the Agra Police is seeking permission from the government to prosecute three Kashmiri students for sedition only on the allegation that they shared some messages on WhatsApp celebrating the victory of the Pakistani team in cricket.

On the other hand, the Uttarakhand Police is not even prosecuting those who are openly challenging the constitutionally established governments that ‘if they do not listen to them, they will fight and overthrow them even worse than the revolt of 1857.’

The police cannot make a foolish argument that they have not received any complaint from anyone for the above allegations.

Do they not know that a Division Bench of the Supreme Court has ordered in the case of NS Dnyaneshwaran (2013) that for cognizable offenses the police is not required to wait for the complainant and that he can himself, on receipt of information from any other source? Can I register a case and investigate?

It is clear that the Uttarakhand Police is not working in this matter for the law and the constitution but for the ruling party.

Challenge to society and country

This brazen and un-professional way of abdicating the police from its legal responsibility is an inauspicious sign for the country and the society. This will weaken the faith of the people of the country and especially the Muslims in the ‘rule of law’ in the country.

Spreading hatred in the name of religion, there was talk of widespread violence in the city which is called ‘God’s Gate’. Ironically, in the Vedic Hindu tradition, at the end of the prayer to God, ‘Om Shanti, Shanti, Shanti’ is said, wishing for peace in the world.