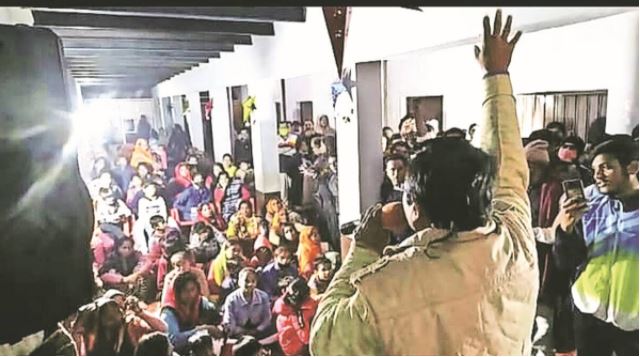 The incident took place at a school in Gurgaon’s Pataudi, where some people were celebrating Christmas. Many fundamentalist people associated with right-wing organizations disrupted the program in front of the children and threatened the people.

Screenshot of video of the incident.

New Delhi: On the eve of Christmas, several radicals belonging to right-wing organizations barged into a school in Gurgaon’s Pataudi and disrupted the program there. He had alleged that there was a conversion being done by the Christian community.

According to the Indian Express, the police have said that the incident took place at 5 pm on Friday at SBD Public School.

Pataudi SHO Amit Kumar said, ‘We came to know about the incident from the video clip. The owner of the school had given the premises to some people for the celebration of Christmas. Some people reached and raised slogans, they felt that there was a change of religion. They left at the request of the school owner, saying it was a Christmas event. We have not received any complaint.

RP Pandey, who runs Dharma Jagriti Mission in Pataudi and lives near the school, said some women had knocked on his door on Wednesday and invited him to attend a function at the school on Friday.

He alleged, ‘At 3 pm on Friday, we came to know that some outsiders were converting there under the guise of celebrating Christmas. So we went to check their agenda. For over an hour, we watched the ceremony. But later we saw that they were luring children to accept Christianity through plays and speeches. So we stopped the program and asked them to leave. We will not allow such activities to succeed.

He then went on stage and grabbed the mic to address the crowd, he said.

Another christmas programme disrupted in a marriage palace in Haryana’s Kurukshetra district pic.twitter.com/PlQIvAgCjL

In a video clip shared on social media, Pandey can be heard saying, “We are not disrespecting Jesus Christ, but we want to tell these children that you have a pledge to protect it (Indian culture).” Have to take it and chant ‘Jai Shri Ram’.

Former RSS and BJP leader Narendra Singh Pahari, who was among the protesters, alleged, “It was not a Christmas celebration, their purpose was to convert. He had spent a lot of money and brought in the priests and people from outside. They were targeting the nearby poor people for conversion. Our religious sentiments were hurt because efforts were being made to divide Hindus.

Let us inform that Pahari had contested the 2019 assembly elections from Pataudi as an independent candidate. The organizer of the event, Ravi Kumar, said that he stopped the ceremony after objections.

Kumar, who runs a tent business in Pataudi, said that the claims of conversion are baseless. He said, ‘It was a simple Christmas celebration. There was no sermon. At least 55 people including women and children were present and some people from the Christian community had come. Around 4 pm, a group of over 100 people came and started opposing the meeting.

Kumar further said, ‘We told them that if they have any objection, we will cancel the ceremony. But they said they just wanted to observe and told us not to mention anything about their religion. An hour later, he disturbed the program. Some came on stage and raised slogans accusing them of conversion.

Kumar said he had asked the women and children to leave to avoid controversy.

The organizer said, ‘The protesters told that they should leave and never come back. We felt sad because it happened in front of the kids, who were scared. Everyone has the right to follow his religion. We don’t know what we did wrong. Some people are trying to disrupt harmony. We have decided not to file any complaint.

Srikkanth, who runs the school, said a woman in his neighborhood had asked him for a place to organize an event on the campus.

He said, ‘I told him that I can give a place after school for an hour. I did this as a goodwill gesture. In the evening I got calls from several Hindu organizations asking me why I have given the place. They allege that there is a change of religion. I am not aware of any such thing. There just Christmas day was being celebrated. None of the students of our school were present.