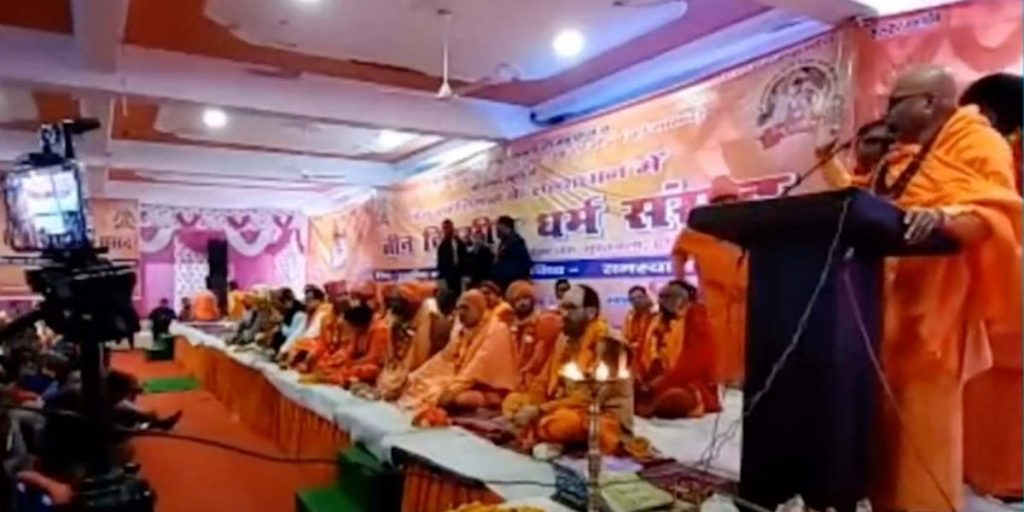 The ‘Dharma Sansad’, organized by Hindutva leaders and fundamentalists in Haridwar from December 17-19, allegedly gave open hate speeches against Muslims and minorities, even calling for their genocide. After this a similar event was held in Raipur, the capital of Chhattisgarh.

New Delhi: Former army chiefs, bureaucrats and several intellectuals have written to Prime Minister Narendra Modi and President Ram Nath Kovind, demanding that they condemn the call for genocide of Muslims and take action against those who make such threats.

More than 200 people signed this open letter written to Prime Minister Modi and the President.

“We cannot allow such incitement to violence, which is not only a serious breach of internal security but may also disrupt the social fabric of our nation,” the letter said. One speaker called on the police and military to take up arms and engage in ethnic cleansing. It is like engaging the army in the genocide of our own citizens and is condemnable and unacceptable.

The letter further said, ‘We call upon the government, Parliament and the Supreme Court to take immediate steps to protect the integrity and security of our country. The Constitution has given the right to practice all religions freely.

The letter said, ‘We condemn such polarization in the name of religion. We urge you (His Excellency the President and the Prime Minister) to take immediate steps to stop such attempts and immediately condemn the incitement of violence.

Uttarakhand: Former government officials told the Chief Minister – take action against the organizers of the Parliament of Religions

A group of retired government officials from Uttarakhand wrote a letter to the state’s Chief Minister Pushkar Singh Dhami criticizing the government’s stand on the recently held Dharma Sansad in Haridwar.

Let us tell you that in the two-day Parliament of Religions held in Haridwar, a call for massacre of Muslims was made publicly.

The former officials called for the immediate arrest of the organizers of the Parliament of Religions and the speakers of these events and for the implementation of the July 2018 Supreme Court order in prevention of mob violence.

The event was organized in the state between December 17 and 19, in which a large number of Hindu religious leaders, right-wing activists and Hindutva organizations participated.

The event was also attended by BJP leader Ashwini Upadhyay, who was earlier arrested for helping organize an event at Delhi’s Jantar Mantar. In this program, slogans were raised calling for violence against Muslims.

“In a publicly available video of the Parliament of Religions, the speakers of Parliament openly called for the massacre of two million Muslim citizens of India and threatened to wipe out villages belonging to this community,” the letter said.

The letter said, ‘The fact is that this program is a failure of your government’s law and order. Now even after international outrage, FIR has been registered against three people in only one section. It is clear from this that your government is saving these people.

Let us inform that on 22 December, Uttarakhand Police filed an FIR against former chairman of Uttar Pradesh Central Shia Waqf Board Wasim Rizvi (now Jitendra Tyagi) and others for hate speech in the Parliament of Religions under Section 153A of the IPC (enmity between different groups on grounds of religion). An FIR was registered under Promoting. Two days later, two other people involved in the video were also named in the FIR.

The letter said, ‘It cannot be said that these were mere speeches. Ever since the current government came to power in 2017, there have been a series of violent incidents with mobs targeting minority communities, their shops and their places of worship. In one case the office of the opposition party was targeted.

It further said, ‘This level of violence has never been seen in Uttarakhand before, yet your government does not seem to have taken any action against the organizations involved in the violence. According to publicly available information, even after two months no one has been arrested in the Roorkee attack.

“We have noted that on October 4, your government justified the extension of their powers under the National Security Act to magistrates in the name of incidents of violence in the state but against mob instigators like the Parliament of Religions,” the letter said. No serious action was taken. Instead, these Tughlaqi decrees were made with the aim of instilling fear in the minds of those dissenting against your government.

Condemning the lack of action in the hate speech cases, the letter said, “This actually appears to send a clear message that religious minorities or anyone who does not agree with your party’s ideology, can lose their property in the state, Couldn’t expect to defend his liberty or his life.’

Former officials said, ‘This is an attack on the foundation of our democracy. Promoting and tolerating such activities is also a direct threat to our security as a nation.

Let us tell you that a ‘Dharma Sansad’ was organized by Hindutva leaders and fundamentalists in Haridwar, Uttarakhand between 17-19 December, in which openly hate speeches were given against Muslims and minorities, even their genocide. was also invoked.

After this a similar Dharma Sansad was organized in Raipur, the capital of Chhattisgarh.