Chhattisgarh: Why are thousands of villagers agitating in Bechapal for almost a month? 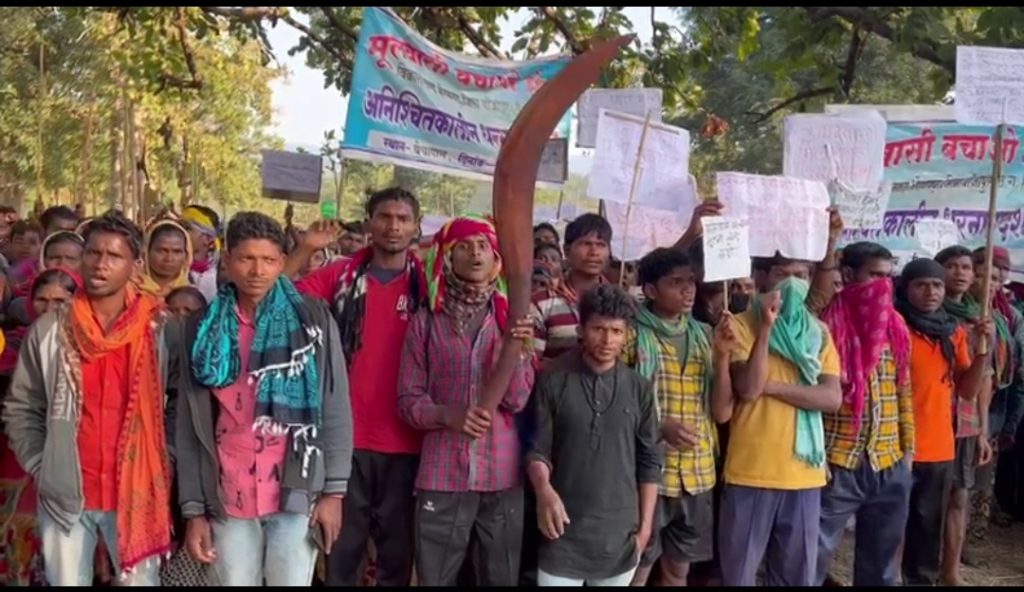 Since November 30, villagers have been sitting in protest against the police camp in Dhur Naxal-affected Bechapal of Bijapur district. They say that they want schools, hospitals but not camps and pucca roads. They claim that if the road is built, the force will enter the villages, people will be harassed. Will be put in jail in false Naxal case.

Bastar: For the last 28 days, thousands of villagers have been sitting in protest against the police camp in Bechapal, a remote Naxal-affected area of ​​Bijapur district of Chhattisgarh. Villagers say that if the police camp opens in the village, their problems will increase further.

Along with the police camp, a paved road is being built connecting many villages including Bechapal to the block and district headquarters, which is also being opposed by the villagers. The villagers say that they will continue to agitate until the demand for removal of the camp is met.

On November 30, hundreds of villagers from Bechapala, Mirtur, Phulgatta, Timenar and other villages have come out on the agitation. Villagers say that they want school, hospital in their village but no police camp and pucca road.

They claim that if the road is built, the force will enter the villages. People here will be harassed. Will be put in jail in false Naxal case. The village is still quiet, the atmosphere of the village will be spoiled by the opening of the camp. The villagers have also accused the jawans of killing them by electrocuting them.

Sukharu Ram Orsa, agitating in Bechapal, says, ‘We have a road coming here, which is causing damage to the trees, plants and animals of the villagers, that’s why we don’t want a road. If the highway road comes, then our farms are being damaged, our leased lands are damaged.

Regarding the police camp, Sukharu says, ‘There is a problem with the children studying. They accuse. Lathi charge is done, the camp people harass, that is why they are opposing the camp.

Pankaj Kadti, another villager involved in the movement, says, “We villagers have gathered from all over the district. According to the tribal tradition, we keep spears or iron tools, but the camp people arrest us as Naxalites, kill them, that is why we are opposing the camp.

The villagers involved in the movement also allege that the government and administration are forcibly getting the road constructed by grabbing the private land of the villagers. Also, thousands of trees have been cut for this construction work. The force is forcibly opening police camps in their area and harassing the local youth. Girls are being raped, so now these villagers have come down to agitate for justice.

The agitating villagers say that the police should stop the fake encounter. Police camps should not be opened in their area. The people killed in fake encounters should be given a compensation of Rs 1 crore each and the injured Rs 50 lakh.

Along with this, the government should also compensate the villagers for all the trees cut during the construction. The villagers said that the agitation would continue till all these demands were not met.

On the other hand, Bijapur ASP Pankaj Shukla says that the villagers have been sent under compulsion to agitate.

He said, ‘We also understand this. The villagers also know that the work being done by the government is in their interest. Naxalites are at a loss due to the construction of camps and roads. Their base is slipping away. Naxalism is nearing its end. In their last moments, they are trying to save their roots in some way.

(The author is a freelance journalist.)