Chandigarh civic polls: BJP’s big defeat in the first election after the repeal of the Agriculture Act 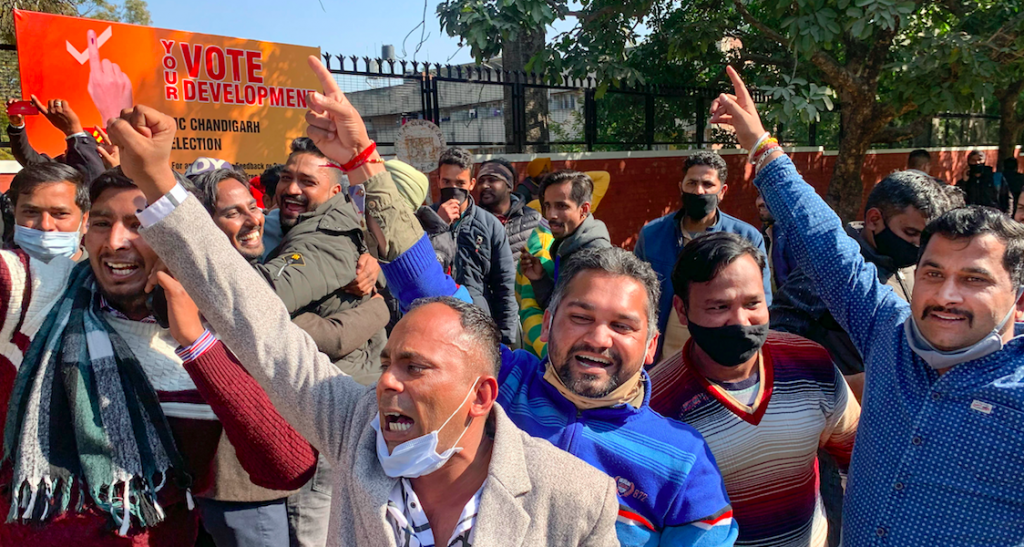 The Aam Aadmi Party, which entered the Chandigarh Municipal Corporation elections for the first time, managed to win 14 out of 35 seats. The position of the BJP, which has been leading with a two-thirds majority in the corporation since 2016, can be gauged from the fact that two former mayors and outgoing mayor Ravikant Sharma also had to face defeat.

Chandigarh: Nearly a month after Prime Minister Narendra Modi apologized to the country by repealing three controversial agricultural laws, the BJP suffered a crushing defeat in the Chandigarh civic polls.

The BJP was ruling the Chandigarh civic body with a two-thirds majority since 2016.

Although it was being predicted that Congress would get anti-BJP votes, but Aam Aadmi Party, contesting civic elections for the first time, managed to win 14 out of 35 seats in Chandigarh Municipal Corporation.

The ruling BJP was reduced to only 12 seats while the Congress could not win more than eight seats. One seat went to Shiromani Akali Dal’s account.

These are the first elections held after the BJP repealed agricultural laws, which are expected to play an important role in the outcome of the upcoming assembly elections in Uttar Pradesh and Punjab.

Aam Aadmi Party’s Chandigarh Convenor Prem Garg the wire “The BJP’s defeat in the Chandigarh civic body is a clear plebiscite for their mistake on agricultural laws and their failure to control inflation.”

“People also taught a lesson to the BJP about misgovernance in Chandigarh, where the civic infrastructure went from bad to worse in the last five years under the BJP rule,” Garg said.

He said that even by not voting for Congress, people have given a clear message that they want change from BJP and Congress. Garg said, ‘Chandigarh is just a trailer. Punjab is our next target, wherever people will vote for a change from traditional parties.

The tenure of the Mayor in Chandigarh is one year. Every year the members of the Municipal Corporation elect a new mayor. There has been a constant fight within the party for the post of mayor since the BJP got a thumping majority in the Chandigarh elections in 2016.

Even the current Chandigarh BJP president Arun Sood, who is considered close to BJP national president JP Nadda, has been accused of promoting factionalism.

The Chandigarh Municipal Corporation, under the BJP, has failed to complete even basic tasks from road construction to flood management system.

Being a union territory, Chandigarh is directly controlled by the BJP-ruled central government. Actress Kirron Kher has been representing the city as a BJP MP since 2014.

How bad the performance of BJP has been in the elections can be gauged from the fact that Davesh Moudgil along with two former mayors and outgoing mayor Ravikant Sharma have also suffered defeat.

Chandigarh BJP President Arun Sood says that the party will not stake claim for the post of mayor.

Sood said, “We were expecting a better election result as the BJP had done a good job in Chandigarh. We will sit down and try to find out, what are the reasons behind such protests. We will not stake claim for the post of mayor and will sit in the opposition.

This defeat of BJP is even more serious because many eminent personalities participated in BJP’s election campaign. Apart from many central leaders including Piyush Goyal, Chief Ministers of many states like Jai Ram Thakur, Manohar Lal Khattar also campaigned.

On the other hand, the election campaign of the Aam Aadmi Party remained away from the glare of the stars. Apart from a rally of Kejriwal two days before the voting on December 24, most of the campaign for the Aam Aadmi Party was done by the local leaders of the party.

Overall, the main focus of the Aam Aadmi Party was on those wards where the BJP performed poorly. Along with this, the lower middle class population living in colonies and villages was targeted in the campaign.

The joining of many Congress leaders to the Aam Aadmi Party also helped the party to prepare a grassroots organization. The vote share of the Aam Aadmi Party in the 2019 Lok Sabha elections was only 3.8 percent. In the municipal elections, it has now increased to 27 percent.

Addressing the media in Chandigarh, senior party leader Raghav Chadha said that the party has won every corner of the city, which means that every section of the society has voted for the party.

“The Aam Aadmi Party has today represented the aspirations of all sections and it is reflected in the party’s victory as well,” he said.

However, the Aam Aadmi Party is still four seats short of a majority, which means that the party will still have to work out many possibilities to get the seat of mayor of Chandigarh.

Congress could not get anti-BJP votes

It was feared that the Aam Aadmi Party’s entry in the elections would dent the vote of the Congress instead of the BJP and would pave the way for the BJP’s victory in the municipal elections.

However, this did not happen. The Aam Aadmi Party made a dent in the anti-BJP vote, which showed that the Congress was successful in carving out an alternative to the BJP. A similar trend was observed at other places as well.

Many believe that the reason for this failure of the Congress is the present leadership of the party, which could not instil confidence among the local people here.

For a long time, Pawan Bansal, the Union Railway Minister and interim treasurer of the All India Congress Committee, occupied Chandigarh. He lost parliamentary elections to BJP’s Kirron Kher in 2014 and 2019 and has since failed to bring about a change in the Congress.

One of the major failures of the Congress is its poor campaign. He failed to get Punjab Chief Minister Charanjit Singh Channi and Punjab Congress President Navjot Singh Sidhu to campaign for the party here even though both of these leaders have their homes in Chandigarh.