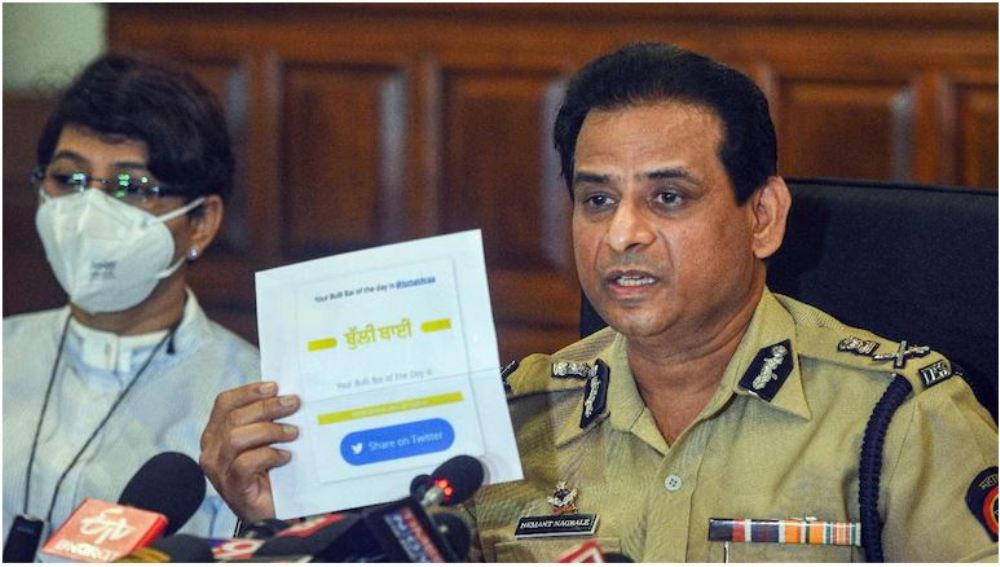 Mumbai Police said that names belonging to the Sikh community were used to show that these Twitter handles were created by the people of that community. The women who were targeted by the ‘Bully Bye’ app were Muslims, so there was a possibility that this could lead to enmity between the two communities and disturb public peace.

Mumbai: Mumbai Police said on Wednesday that three people have been arrested so far in connection with the ‘Bully Bye’ app in which Muslim women were being defamed by posting pictures online.

The police also claimed that the accused seemed to have used names belonging to the Sikh community in their Twitter handles to mislead people and the accused could not be identified.

In this regard, a senior police officer told in Mumbai that 18-year-old Shweta Singh, arrested from Uttarakhand by the cyber unit of the city police, is the main accused, who created the Twitter handle of the app.

She claimed that Singh had passed her class 12th examination and was planning to pursue engineering.

Earlier in the day, Mumbai Police Commissioner Hemant Nagrale told reporters that some more people are likely to be involved in the case.

Nagrale said the Mumbai Police registered an FIR on January 2 after receiving a complaint about the app, following which investigators began a technical analysis of the app and the associated Twitter handle.

“During the technical analysis, we gathered information about the followers of the app and started the search for the accused,” he said.

Nagrale claimed that Bengaluru resident Vishal Kumar Jha, a second year civil engineering student, was one of the five followers of the handle.

Nagrale also expressed displeasure over comments made by some “local officials” outside Maharashtra about the matter, saying it was unfair, as they did not have complete information.

The Mumbai Police Commissioner declined to comment when asked whether the accused in the case were also involved in the ‘Sulli Deal’ case (where a similar website targeting Muslim women was created). He said that the investigation of the second case is being done by Delhi Police.

The app was hosted on the open-source software platform GitHub. Later it was blocked by the platform. Actually it was not a real ‘auction’ or ‘sale’. The app was intended to humiliate and intimidate the targeted women, many of whom are active on social media.

Mumbai Police said in a release on Wednesday evening that those involved in the promotion of the ‘Bully Bye’ app targeting Muslim women used names belonging to the Sikh community on the Twitter handle to mislead.

Police said this could have led to communal tension and this was averted with the immediate arrest of the three accused.

It said that since the women targeted were Muslims, there was a possibility that this could lead to “enmity between the two communities” and “disturbing of public peace”.

“Since the accused were arrested in time”, the situation of enmity between the communities was averted, the police said.

The release said that the information given on the Twitter handle of the app claimed that its creator is ‘KSF Khalsa Sikh Force’, while another Twitter handle, ‘Khalsa Supremacist’ was its follower.

It said that during the technical analysis, the police found Vishal Kumar Jha (21 years), a civil engineering second year student of Dayanand Sagar College of Engineering, Bengaluru, involved in this.

It is said that he also used to run a YouTube channel named ‘Tavasya Vats’.

Police have recovered a mobile phone, two SIM cards and a laptop from him. It told that the accused Mayank Rawal is also an engineering student.

Significantly, without permission of hundreds of Muslim women, their photographs were tampered with and uploaded for ‘auction’ on the ‘Bully Bai’ app.

The app was hosted by the US-based open-source software platform GitHub on December 31, 2021, in which at least 100 Muslim women were posted online along with vulgar remarks of molested images.

It is noteworthy that this is the second time this has happened in less than a year. Named ‘Bully Bai’, the app is similar to ‘Sully Deals’, which led to a similar controversy last year.

In July last year, some unidentified people had uploaded photos of hundreds of Muslim women for ‘auction’ on an app called Sulli Deals like ‘Bully Bye’.

This time an online portal named ‘Bullibai’ (bullibai.github.io) has conducted an ‘auction’ (derogatory) using manipulated images of these Muslim women without their consent with the sole intention of disrespecting these women. by using the word ‘Bulli’ (Bulli).