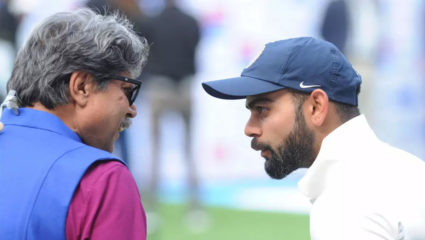 Mumbai: The 1983 World Cup is one of the most memorable moments for India. The glimpse of which is now being seen by the people at the box office as well. To make this memorable victory even more special, its biopic film ’83’ has been made, which is being liked a lot by the people. Many people have liked Ranveer Singh’s acting. In which India’s great batsman Virat Kohli is also there.

Indian Test captain Virat Kohli has praised the film 83 fiercely. Along with this, he has also praised the rest of the film’s lead actor Ranveer Singh. Kohli tweeted, “Could not have relived this iconic moment in Indian cricket history better and better. This film gives a chance to live the emotional moment of 1983 World Cup once. All the actors have done a wonderful job in this movie.

Couldn’t have relived the most iconic moment of Indian cricket history in a better manner. A fantastically made movie which immerses you in the events and the emotion of the world cup in 1983. Splendid performances as well.

On the other hand, Kohli said in his second tweet, Ranveer Singh has got a different look in the film. Everyone has done a wonderful job. In this tweet, Virat Kohli also mentioned 1983 World Cup winning captain Kapil Dev and the film’s director Kabir Khan.

Apart from these, Kohli’s wife and Bollywood’s famous actress Anushka Sharma has also given her reaction on the film 83. He tweeted that the entire team of #83TheFilm has so beautifully recreated a magical moment in India’s sports history. I thank director Kabir Khan for his film and Ranveer Singh for giving a chance to the new generation to live it again with his acting. Along with this, Anushka also praised Ranveer Singh fiercely.

A magical moment in India’s sporting history brought to life so beautifully by the entire team of #83TheFilm. @kabirkhankk thank you for letting the newer generations relive this through your film and @RanveerOfficial, what can I say? You are just superlative in the film.

Talking about the historic victory of 1983, India defeated the two-time World Cup winner West Indies in the final played on 25 June 1983. India won the World Cup for the first time by defeating West Indies by 43 runs. The Indian team went to England in 1983 as an underdog. At that time West Indies was considered to be the top team.

In such a situation, no one expected that India would be able to win this trophy. But, India not only registered its name on the trophy, but since that victory a new era of Indian cricket had also started.

According to reports, the girl had become so ill while eating that she could…