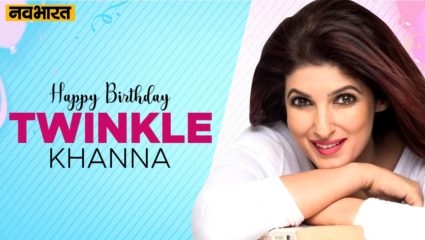 Mumbai: Bollywood actress Twinkle Khanna is celebrating her birthday today, 29 December. He was born in 1974 in Mumbai. Twinkle is the daughter of superstar Rajesh Khanna and actress Dimple Kapadia. Twinkle Khanna is known for her impeccable style. The actress had quit working in films years ago but is now busy writing books and articles. His witty style is clearly visible in his tweet. In such a situation, today on the occasion of his birthday, we tell you some special things related to him.

Twinkle did her schooling from New Era High School, a boarding school in Panchgani. Twinkle wanted to become a chartered accountant. But Rajesh Khanna and Dimple Kapadia wanted to see him as an actor. That’s why Twinkle gave up her dream of becoming a chartered accountant and turned to films. Twinkle started her film career with the 1995 film ‘Barsaat’. Her opposite was Bobby Deol in this film. Actress This film proved to be a super hit at the box office. Twinkle received the Filmfare Best Actress Award for this film.

After that, the Raj Kanwar-directed film ‘Jaan’, which was released in the year 1996, proved to be the second consecutive hit. She played the character of Kajol in the film in which she appeared opposite Ajay Devgan. After that the actress signed 4 films. But only one of them got hit. The actress did her last film ‘Love Ke Liye Kuch Bhi Karega’. After that, Twinkle left films and married Akshay Kumar on January 17, 2001.