There was a ruckus on this dialogue of Akshay-Sara-Dhanush’s film ‘Atrangi Re’, people said- ‘Insult to Shiva-Hanuman’ 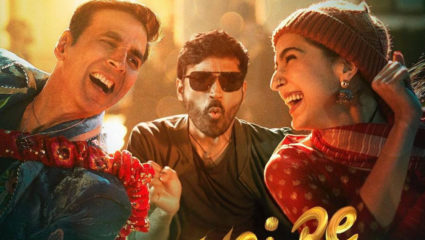 MumbaiAkshay Kumar, Dhanush, Sara Ali Khan’s film ‘Atrangi Re’ has been released. In such a situation, there is a demand to boycott this film on social media. #Boycott_Atrangi_Re is currently trending on social media. People protesting say that love jihad has been promoted in this film. Along with this, a dialogue of this film has also created a ruckus. Sara has spoken this dialogue in the film. Along with this, the names of Hindu deities Shiva and Hanumanji are also mentioned in the dialogue.

Actually there is a scene in this film where Sara says- ‘Hanumanji’s prasad has been understood, who will spread his hand and we will meet. We are Shivji’s dhatura, we will go with my mother’s oath and will come out from the backyard.’ In such a situation, there has been a ruckus on social media regarding this dialogue. Also, there is another dialogue in the film where Sara says – Main Hindu Thakur woh katai miyambhai, it is called real love story. Because of this dialogue in the film, there is an allegation of promoting love jihad.

Are the Censor board members and @prasoonjoshi_ sleeping?

Allowing such derogatory language for Hindu deities and Hindu rituals

See clear evidence of promoting #Love_Jihad in @akshaykumar
Flim, So another task he has given to us to #Boycott_Atrangi_Re pic.twitter.com/9R11W3xdGs

Significantly, in this film, Sara is seen playing the role of ‘Rinku’, a girl from Bihar. On the other hand, the bow of Tamil boy Vishu. Appeared in the character of Vishu. It was seen in the film that how both of them are forcibly caught and got them married. After marriage, it is revealed that Rinku is in love with Shahzad i.e. Akshay Kumar.

Bollywood actors very well see the script before signing any movie 🎥 @akshaykumar & @SaraAliKhan knew that this story will hurt HINDU SENTIMENTS but they don’t care so why we should care for them. Sign 1st Muslim Girl and Hindu Boy movie also sometime #Boycott_Atrangi_Re #BanIt pic.twitter.com/9GfyHikMBX

Sania Mirza played the final match of the Australian Open on Friday, which was the…