There was a fierce debate between Salman Khan and Shamita Shetty, they were seen shouting at the actress 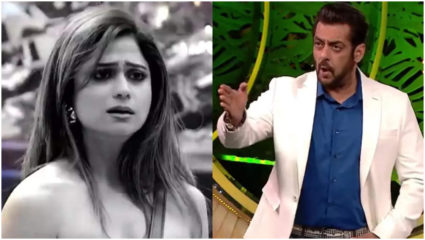 Salman Khan-Shamita Shetty gets into heated argument, was seen shouting at the actress: ‘Bigg Boss 15’ host Salman Khan was seen taking a class on the contestants on their gameplay in the last week. During this, he was seen telling the truth to the contestant Shamita Shetty. As soon as Salman questioned Shamita’s attitude towards Rakhi during the show, actress Shamita lost her cool and reacted angrily. The actress explained that nothing was done intentionally against Rakhi. I wanted to do the task and I tried my best to play fair in the task. After Shamita convinces, Rakhi also raised questions on her, which led to an argument between them.

Salman got angry after hearing the Tu-Tu Main-Main between Rakhi-Shamita and started shouting. The actor said- ‘Shamita! What f*** dude Shamita… is someone telling you you are not trying….’ During this, Shamita was once again seen telling her point to Salman Khan, when Rashmi Desai tried to stop her from doing so.

Responding to Rashmi, Shamita gestures that ‘don’t stop her… my relationship with her is different….’ Shamita then tells Salman Khan that ‘she considers him her guru and wants him to guide her’. After saying this, Shamita starts crying in front of everyone. Later, Salman says that ‘don’t ‘butt in’ him when he is already talking. After this Shamita also apologized to Rakhi.

Share. Facebook Twitter Pinterest LinkedIn Tumblr Email
Previous ArticleVicky Kaushal got heavy for Sara Ali Khan to travel on a bike in Indore, due to this complaint was filed
Next Article The 16th day of Allu Arjun’s ‘Pushpa’ was also great, the film earned so many crores