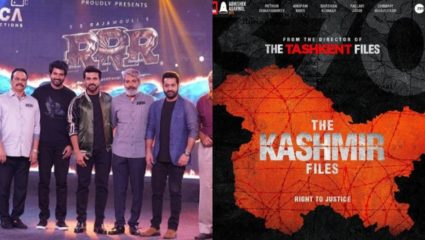 Mumbai : In the year 2021, many films were released which proved to be a hit. But, this year many more films were to be released, which will now be released in 2022 this year. After which it is being speculated that this year this film will be a big hit at the box office. It is worth noting that in 2022, these content driven films are also ready to compete with these big budget films.

Let us tell you the list of those films, which the audience is eagerly waiting for.

Laal Singh Chaddha is the biggest film of the upcoming year. This comedy-drama is directed by Advait Chandan. The screenplay of which is written by Eric Roth and Atul Kulkarni.

RRR is SS Rajamouli’s next film after India’s biggest film Baahubali. The film is based on a fictional account of the lives of two freedom fighters of India before they became freedom fighters.

Kashmir Files is an upcoming Indian Hindi-language film about the story of the exodus of Kashmiri Hindus.

Badhaai Do is the spiritual sequel to the 2018 film Badhaai Ho, an upcoming Indian Hindi-language family drama starring Bhumi Pednekar and Rajkummar Rao.

KGF Chapter 2 is an upcoming Indian Kannada-language period drama action film, the second installment of a two-part series. It is the sequel to the 2018 film KGF: Chapter 1.

Share. Facebook Twitter Pinterest LinkedIn Tumblr Email
Previous ArticleCovid 19 Effects on Kids: Children of these TV celebs got corona infected, less than one year old
Next Article Affordable recharge plans rain! These are the powerful plans of Airtel, Jio and Vi priced below Rs 300, getting plenty of data-calling