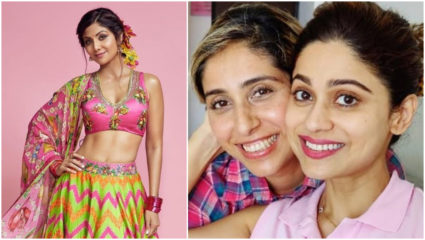 Mumbai: With the grand finale of ‘Bigg Boss 15’ approaching, this is where new drama is being witnessed in the house everyday. Shamita Shetty, younger sister of Bollywood actress Shilpa Shetty, is also getting a lot of love from the audience. In such a situation, actress Shilpa has thanked Neha Bhasin for supporting Shamita. While sharing the video posted by Neha on social media, Shilpa wrote- ‘I am jealous of you, you have got a chance to talk to her. Your love, friendship and support means a lot to @ShamitaShetty and us.

Let us tell you, from time to time Shilpa is seen supporting her sister. Recently the actress went for Nashik Shirdi Darshan with her husband Raj Kundra. There the actress wished Shamil success. See this post-

Let us tell you, the grand finale of ‘Bigg Boss 15’ has been extended for two weeks. This was announced recently for the contestants in the Bigg Boss house. While the rest of the family were happy after this announcement, Shamita was sad. She told Nishant Bhat how it is difficult to live in the same house with Rakhi Sawant and Abhijit Bichukale.