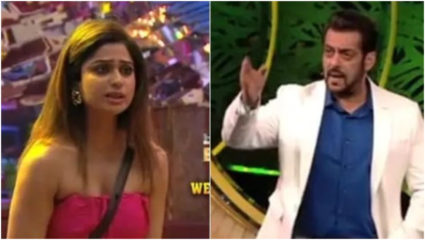 Shamita Shetty got hit hard for pushing Rakhi Sawant, Salman Khan scolded in ‘Weekend Ka Vaar’: This time Bigg Boss 15 ‘Weekend Ka Vaar’ episode is going to be full of entertainment. In this episode, Alia Bhatt, Jr. NTR and Ram Charan will be seen promoting their upcoming film ‘RRR’. Apart from this, Salman Khan will also be seen speaking Telugu and dancing to a song from ‘RRR’ in the episode. Also, ‘Weekend Ka Vaar’ will also mark Salman’s pre-birthday celebration. Apart from the team of ‘RRR’ on the sets of Bigg Boss 15, Shahid Kapoor, Mrunal Thakur and Nora Fatehi will arrive as guests. These actors will appeal to visit ‘Jersey’ theater on the sets of Bigg Boss 15.

Also, Bigg Boss 15 host Salman Khan will also be seen taking the class of the contestants. In the upcoming episode of Bigg Boss 15, you will see Salman Khan lashing out at the contestants for playing a ‘fair’ and ‘unfair’ game. Host Salman asks ‘Who is the most unfair player in the house?’ Shamita Shetty constantly takes Rakhi Sawant’s name to favor Devoleena Bhattacharjee. He then calls out Rakhi to push her. The actor tells Shamita, ‘The way you pushed Rakhi was wrong. You have called Umar Riaz to be aggressive. You did what you are opposing.’

Salman Khan also calls out Karan Kundrra for his feud with Tejashwi Prakash. The actor questions, ‘Were you upset that Rakhi was playing an unfair game or the fact that Rakhi and Devoleena were supporting Tejashwi?’ This keeps Karan in a tight spot.

Share. Facebook Twitter Pinterest LinkedIn Tumblr Email
Previous ArticleRanveer Singh’s ’83’ earned only so many crores on the first day, collection was less than ‘Sooryavanshi’ and ‘Pushpa’
Next Article Modi and his Hindutva are the real descendants of the British Raj and its policies…