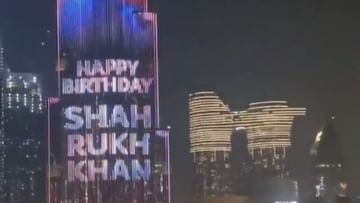 Many such videos are becoming viral on social media, in which the picture of Shahrukh Khan can be seen on Burj Khalifa. With this, he was once again given this honor.

Shahrukh Khan is counted among those artists of the industry, whom his fans eagerly wait to see on the silver screen. His craze remains intact not only in Bollywood but also abroad. Everyone is aware of his stardom. This is the reason that his dominance is in the whole world. Recently, such a video of King Khan of Bollywood, who remains in the headlines for some reason or the other, is going viral, which is proving his personality once again. Let us tell you that his photo is shining on the world’s largest building Burj Khalifa. By showing the picture of the actor, Burj Khalifa has given him respect.

Let us tell you that on Wednesday, the world’s tallest building Burj Khalifa was illuminated on the screen. Simultaneously, the event coincided with the launch event of the campaign by one of the largest healthcare service providers in the United Arab Emirates (UAE) as its brand ambassador, Shah Rukh Khan. Shahrukh’s fans are very excited to see this sight.

Now many such videos are becoming viral on social media, in which the image of Shahrukh Khan can be seen on Burj Khalifa. Shah Rukh Khan is the brand ambassador of the campaign, which has 39 hospitals and medical centers in the UAE and Oman under the brands Burjeel, Medior, LLH, Lifecare and Tajmeel. In this 1:10-minute campaign, King Khan can be seen narrating the story of a healthcare group.

King @iamsrk on the world’s tallest building Burj Khalifa, as brand ambassador for the Burjeel group.

King Khan’s birthday is in November

Shahrukh Khan’s fan following is so tremendous that the whole world wants him. Meanwhile, Shahrukh Khan is also trending on Twitter. Also, people are not tired of praising him. King Khan’s birthday is also on 2nd November. Even before this, this surprise for the actor from Burj Khalifa is very strange. By the way, this is not the first time that Shahrukh’s picture is shining on Burj Khalifa. Even before this, he has been given this honor many times.

Making a comeback in Bollywood after four years

On the work front, Shah Rukh Khan was seen in Ayan Mukerji’s film Brahmastra. He was earlier seen in Aanand L Rai’s Zero in the year 2018. Now after four years, he is ready to make a tremendous comeback in Bollywood once again in 2023. Pathan will release on January 25, Jawan on June 2 and Dunki on December 22, 2023. Which his fans are eagerly waiting for.

burj khalifa dubai Shah Rukh Khan shah rukh khan news
Share. Facebook Twitter Pinterest LinkedIn Tumblr Email
Previous ArticleAishwarya Roy, who got 90% in 12th, did not want to become an actress, this was her choice
Next Article Are you also waiting for Jio Phone 5G? Know these features before launching