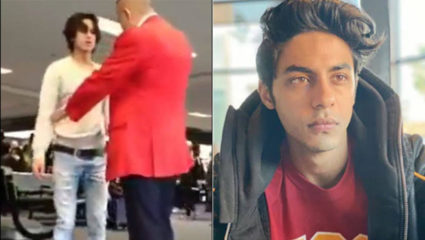 Shah Rukh Khan’s son Aryan Khan urinates in a state of intoxication, video surfaced, knows the whole truth: A video of a man urinating in public at the airport has gone viral on social media and netizens have claimed that This video is of Aryan Khan, son of Shah Rukh Khan. Even though this video is going viral on social media in the name of Aryan, but the person seen in the video is definitely not of Shahrukh’s son. According to reports, the person seen in the clip is ‘Twilight’ actor Bronson Pelletier. In an intoxicated state, he urinated on the floor of the lobby of the Los Angeles International Airport in 2012.

However, this video clip has been posted on social media with a tweet like ‘Another version of #AryanKhan in the US’. It is written with this that ‘He is a drug addict, he cannot control his urine in airport lobby/passage, urinates in open’. #sameerwakhende zindabad

Let us tell you, Aryan Khan came into the limelight recently when the Narcotics Control Bureau (NCB) arrested him after raiding an alleged rave party on a luxury cruise to Goa in Mumbai. Aryan was lodged in Mumbai’s Arthur Road Jail after the NCB’s arrest on October 3. After a legal battle, the Bombay High Court granted bail to Shahrukh Khan’s son with certain conditions.
Share. Facebook Twitter Pinterest LinkedIn Tumblr Email
Previous ArticleEmraan Hashmi will start shooting for ‘Tiger 3’ from this week, will give competition to Salman Khan
Next Article Devoleena Bhattacharjee vandalized herself after a fight with Abhijeet Bichukale, locked herself in the washroom